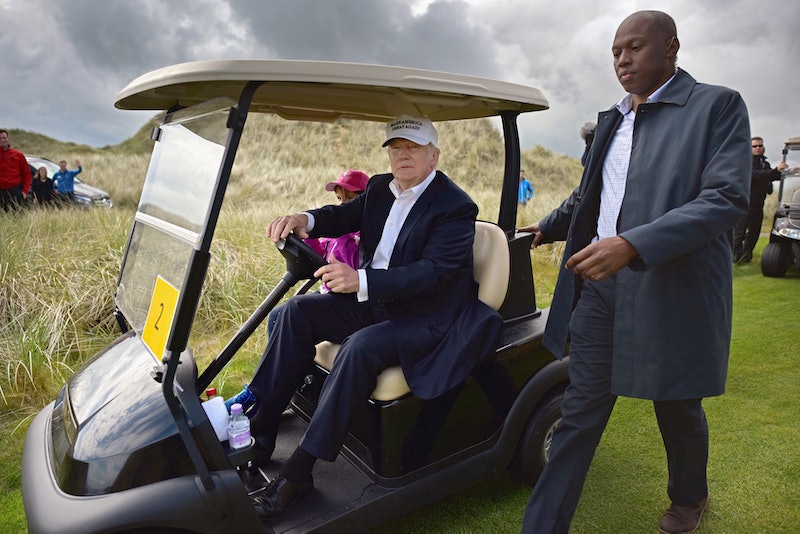 Donald Trump's first year in office will come to an end on Saturday, but though he will have technically spent 365 days as president, many of those days were actually spent on a golf course. It may seem like a tired critique, but given how many times Trump criticized former President Barack Obama for golfing, it is worth noting that Trump spent at least 90 days golfing — or at least, at properties with golf courses on them — during his first year as president.

Trump's most recent excursion to a golf course garnered a significant amount of backlash. Instead of engaging in any kind of community service on Martin Luther King Jr. Day (he had encouraged Americans to honor King's memory "with acts of civic work"), the president went to his Florida golf club.

NBC News also has a tracker for Trump's golf trips, which has been counting the days Trump has been office and is updated every time he arrives at a golf course. According to the NBC News tracker, Trump has spent 94 days of his presidency at golf properties, and 121 days total at Trump brand properties. The tracker also provided the following breakdown of how many days Trump has spent at each of his golf courses:

At this rate, Trump is already on track to surpass Obama's golfing frequency rate. The Washington Post reported that Obama played 333 games of golf as president in eight years — a number that, if Trump keeps playing at the same rate as he has been, he will surpass by May 17, 2021. Additionally, Obama only played 113 games of golf in his first term, and Trump is on track to surpass that number by July, less than two years into his term.

Given all this, a critical question naturally follows — are all of Trump's trips to his golf courses costing taxpayers more than Obama's vacations and outings? After all, in addition to criticizing Obama's golf habits, Trump reveled in pointing out the cost to taxpayers. This is where it gets tricky, though, as The Washington Post pointed out. What we do know is that the Secret Service had already depleted its allocated budget for 2017 by September — though Trump's trips alone are not responsible for this, as the Secret Service is also responsible for protecting his family, and his adult children are constantly traveling as well.

According to The Wall Street Journal, 6.6 million taxpayer dollars went toward funding airfare alone for Trump's Mar-a-Lago resort in Florida. This does not include the costs of protection by both the Coast Guard and the Secret Service. The Wall Street Journal noted that Obama and his family averaged roughly 1 million taxpayer dollars per month on travel, whereas Trump was already averaging 1.5 million per month on just airfare by June.

Trump spent a significant amount of time criticizing Obama for golfing throughout his presidency. It seems now that he is president himself, however, that Trump has had a change of heart on the matter.