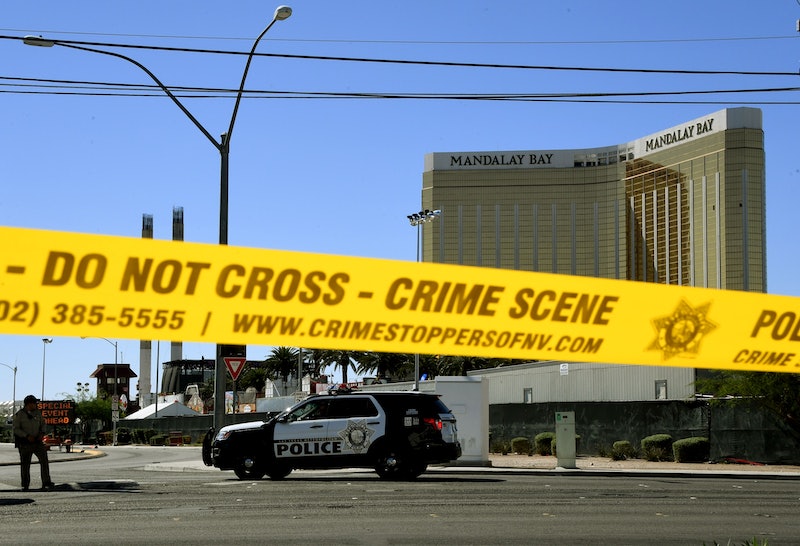 On Sunday, a gunman shot and killed 58 people at a country music concert in Las Vegas and injured over 500 more. It was one of the deadliest mass shootings in America in the last 100 years — and as is so often the case after tragedies like this, authorities have identified a white American male as the shooter. Despite President Trump's frequent bromides against "radical Islamic terrorism," what we really need to be talking about is the domestic terrorism of white American men.

Trump has often said that he wants to "make American safe again," and once called for a complete ban on Muslims entering the United States, claiming that this would help prevent "horrendous attacks by people that believe only in Jihad." But if the president's goal truly is to prevent Americans from dying at the hands of violent assailants, he would be much smarter to train his scrutiny on white guys from the good ol' US of A.

To be sure, the definitions of the terms "mass shooting" and "terrorism" are ambiguous, and there are many equally-valid ways of quantifying the threat levels of violent assailants. But the data on mass killings in the United States isn't ambiguous: No matter how you look at it, white American men are responsible for an overwhelming share of deadly attacks on innocent people in the United States, including both mass shootings and terror attacks.

Since Trump took office, white American men have killed more Americans than have Muslims or foreigners, according to Vox. Data compiled by Mother Jones shows that the majority of mass shootings since 1982 were committed by white men, while a study by the New America Foundation found that white extremists committed twice as many terror attacks between Sept. 11 and the end of 2015 — and killed more Americans during that time period — than did Muslims. A study by the Center for Investigative Reporting found that between 2008 and 2016, terror attacks by right-wing extremists were more numerous, more likely to be deadly, and less likely to be foiled by law enforcement than attacks by Islamic terrorists.

Now, terrorism itself isn't actually a terribly big threat to American lives — in the 10 years after Sept. 11, Americans were more likely to be crushed to death by their own furniture than killed by a terrorist, according to data from the Council on Foreign Relations and the Consumer Product Safety Commission. But if we're going to focus on terrorism as a threat, we definitely shouldn't be focusing on the threat posed by Muslims and foreigners.

Foreign terrorists simply haven't killed very many Americans when you look at the bigger picture. In an analysis of terror attacks from 1975 to 2015 — a period that accounts for the Sept. 11 attacks — the conservative Cato Institute found that any given American has only a one-in-3.6-million chance of dying at the hands of a foreign-born terrorist. For some perspective, this means that Americans are more likely to be killed by their own clothing catching on fire than by a foreign terrorist.

Nothing about how terrorism is treated in American media and politics reflects these facts, however. Many vocally oppose the admittance of Syrian refugees to the United States out of fear that they'll pose a terrorist threat, while politicians who refuse to use the term "radical Islamic terror" are regularly criticized by their opponents for not doing so.

But any official or policymaker who earnestly wants to prevent mass shooting and terrorist deaths should focus squarely on the threat posed by white American men. Focusing anti-terrorism scrutiny on foreigners and Muslims is counterproductive at best and disingenuous at worst, because there is no honest interpretation of the data that suggests foreigners or Muslims are the biggest terror threat in America.