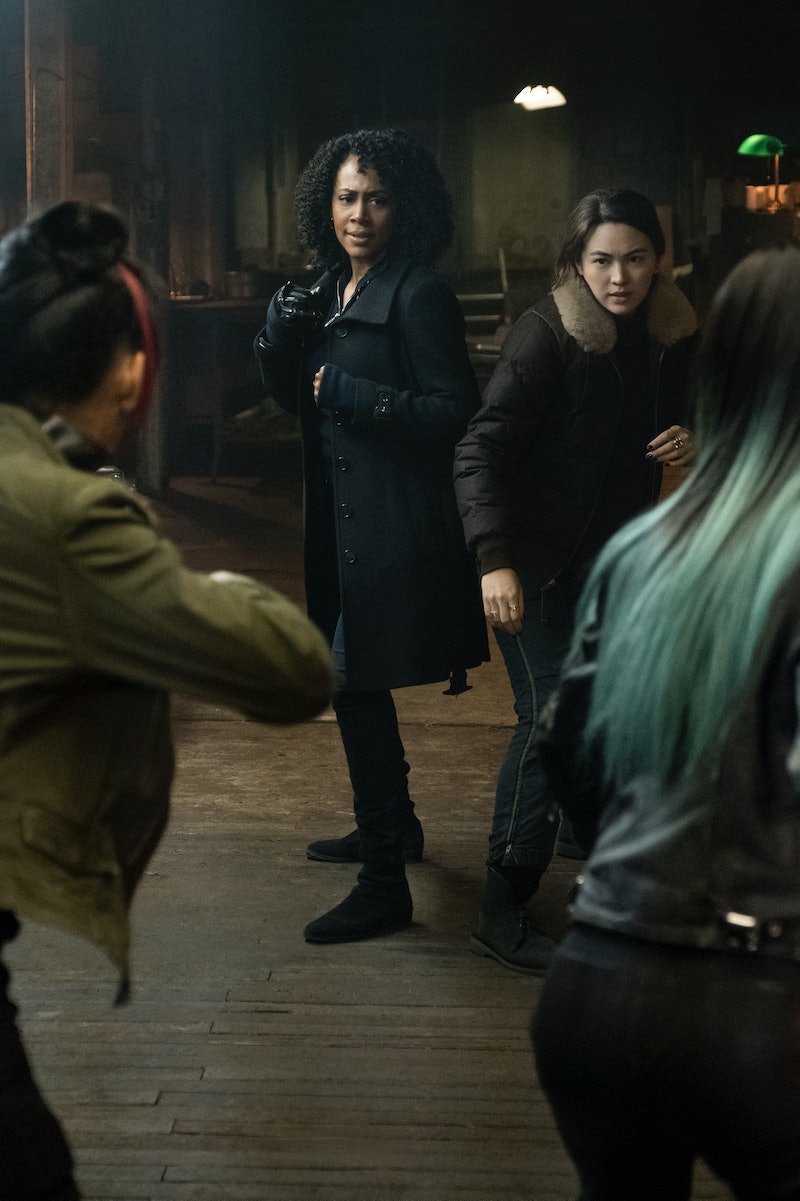 Spoilers for Iron Fist Season 2 ahead! After Danny and Colleen popped in on Luke Cage Season 2, Misty Knight is returning the favor and lending a hand on Iron Fist Season 2. No, the "Daughters of the Dragon" haven't officially become a crime-fighting private detective duo yet, but the Marvel comics pals are certainly furthering their working relationship and friendship. How many episodes is Misty Knight in Iron Fist Season 2? She made some other friends in Danny's world as well.

Misty first appears in Season 2, Episode 4 and returns in Episodes 5, 6, 7, 9, and 10 — which is the finale. So, once she's there she's pretty much there to stay. In Episode 8, while she isn't on screen, she's working behind the scenes to get a police task force that will help them take down Davos. There's one really awesome fight scene with her and Colleen and a cool girl gang that's worth watching without spoilers.

Not only does she help them out of some scrapes in Chinatown, Misty and Colleen take some time to do a little soul searching. They talk about their five year plans, and what they want to be doing. Women really take center stage in Iron Fist Season 2, and with two characters as strong as this plus Mary, Joy, and Sherry Yang, how could they not? Misty knows that she is not destined to be behind a desk, which is a continuation of her arc in Luke Cage Season 2. There's a Captain job she could have, but doesn't want. She is better served on the field, and upgrading her bionic arm wouldn't hurt. It sure seems like this franchise is inching towards Misty and Colleen branching out on their own, but when? How much longer can we wait for this team-up to happen? For now, they're just going to hang out as friends. Even superheroes need to have some down time.

Also, Misty is kind of flirty with Ward Meachum on Iron Fist. Where did that come from? In Marvel Comics, believe it or not, Misty Knight and Danny Rand are a major 'ship. They get engaged and everything. However, on the Netflix series the two are pretty strictly platonic. It doesn't seem like this is ever going to happen. So it's interesting to see her making eyes at Ward not once but twice in Season 2. He's going through some stuff right now with his addiction and brief fling with a sponsor, but it could happen, and that would be an interesting twist on the source material. Sometimes the romantic relationships across Luke Cage, Daredevil, Jessica Jones, The Punisher, and Iron Fist feel like a big game of Marvel spin-the-bottle. If this random relationship is meant to be, bring it on.

In the finale, Misty references the last time she saw Luke, at the end of Luke Cage Season 2, and how worried she is about what he has become. She even jokes that (additional finale spoiler alert) Colleen's new superpowers might be able to punch some sense into him. Misty's journey to be the hero she's meant to be might be taking a while, but she's definitely on that path, and Iron Fist Season 2 proves it even further.