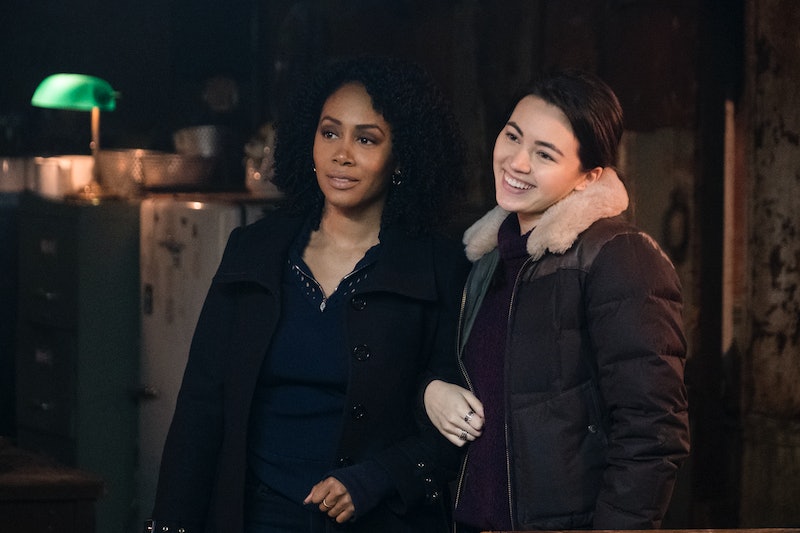 After their epic bar fight in Luke Cage Season 2, Marvel Netflix fans should be pumped to see Colleen Wing and Misty Knight join forces again in Iron Fist Season 2. Spoilers for Episodes 1-6 follow. During "The Dragon Dies At Dawn," Colleen and Misty fight the Crane Sisters in a scene that highlights what a great team these two women make. The Crane Sisters are tattoo artists who are responsible for giving Davos the power of the Iron Fist and turning him into the Steel Serpent. When Jessica Henwick's Colleen and Simone Missick's Misty go to their tattoo parlor searching for answers, they aren't necessarily looking for a fight — but they sure are ready for one. And the people behind Iron Fist Season 2 explained to Bustle just how significant this Episode 6 moment is.

In "Target: Iron Fist," the Crane Sisters (Lori Laing's Avalon, Lauren Mary Kim's D.K., and Jean Tree's Aiko) combine the tattoo of an old Iron Fist with Danny's blood to ink Davos with his serpent tattoo. This ceremony gives Davos the power of the Fist and takes it away from Danny. With Danny recovering, Misty and Colleen head to the tattoo shop to question these mysterious women. Although Colleen spends the majority of the beginning half of Season 2 trying not to fight, she has no choice once the Crane Sisters attack her and Misty.

Avalon flees with the Tebori needles that they used to tattoo Davos, but Misty knocks her off her motorcycle with her bionic arm. That leaves Colleen to take on Aiko and D.K. inside the shop. For Season 2, Iron Fist enlisted Clayton Barber of Creed and Black Panther as the new stunt coordinator. And he explains at a press event focused on the fights of Iron Fist Season 2 how proud of this scene he is, particularly because Henwick faced two trained stunt women.

The performers behind D.K. and Aiko have worked on stunts for Iron Fist, Daredevil, and The Defenders before — Kim also stunt doubled for Elektra while Tree stunt doubled for Madame Gao. Yet, Barber notes how Henwick was able to hold her own and calls this a "signature fight" for Colleen. "The fact that you had three qualified, well-practiced performers doing that fight is what makes that fight so special. It's a very beautiful fight," Barber says.

He also states that Henwick did most of her own stunts in this scene. "The great thing about it is you see there's no cuts during it — not too much. ... The only cut in there is just the one fall and that's it from [Henwick]," Barber says. "I'm very proud of her for doing that fight with the stunt ladies." Henwick, who was also at the event, jokes, "I paid him to say that."

Barber says how the inspiration for the scene was simply, "Three creepy females who are tattoo artists and a wonderful lead who can do some great kung fu." But they made the most of this combination of female characters as it was appropriately filmed on International Women's Day.

"I don't know if it was intentional, but it worked out really well," Henwick says at the Bustle offices the next day. "There was a moment where we all like acknowledged it. We looked around and we were like, 'Yes, five badass women, super talented, all just doing our thing.' It's very rare. I don't think I've ever been on a set which has had five female characters in the same room at the same time."

Henwick was no stranger to female-led fight scenes even before she joined the Netflix Marvel universe since she portrays Sand Snake Nymeria on Game Of Thrones. But she said at the Iron Fist stunt press event how the Crane Sisters scene was challenging since they only had one day to film. Also, the conditions weren't stellar since she notes to the amusement of the attending press that they were working "in this sh*tty, sh*tty tiny room and it was full of asbestos."

She also discusses how the fight plays into Colleen's character arc this season. "That moment where she takes off her jacket, it's kind of representative of where she is in her journey," Henwick says. "She's given up fighting at the beginning of the show ... and then this is the moment where she goes, 'Oh, I forgot. I enjoy this,' which we saw in Season 1 with the cage. She's got a bit of an addiction to that adrenaline kick. So it's always nice to do fight scenes, but it's nice to do fight scenes with characters relishing it. Especially as a female character, you just never get to see that."

The fight also stands out because of how badass it is. Barber calls it "a real ballet of interesting movements of everyone working together and going off each other" and notes how "poetic" it is. Danny Rand actor Finn Jones also tells Bustle how hard the actors worked on it, calling it "really impressive."

As for other fights to watch out for in Iron Fist Season 2, Barber cites the kitchen scene in "The Fury Of Iron Fist," Alice Eve's subway fight as Mary Walker in "Target: Iron Fist," Sacha Dhawan's "very menacing" club fight as Davos in "Heart Of The Dragon," and an upcoming Misty fight. And, of course, there's Danny's flashback fight with Davos in K'un Lun and the "very dramatic" final fight scene.

But fans of the Daughters of the Dragon will surely love Colleen and Misty's battle with the Crane Sisters. Not only because it reunites this fan-favorite pair, but because — in the words of Henwick — it shows how women can relish the heat of battle too.