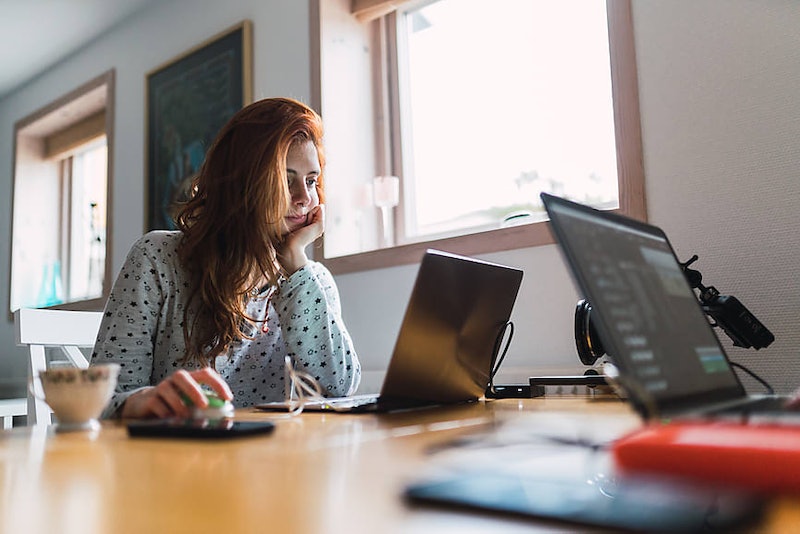 Stocksy/Addictive Creatures
By Aoife Hanna
May 30, 2019

Spending time on the internet is just a part of modern life. The combination of needing it for work, for scheduling, and for staying up to date with news around the world means that it's pretty unavoidable. And even if it is avoidable, do you want to avoid it? Probably not. Finding out how much time you spend on your phone is easy enough with smartphones but have you also factored in computer use? Because a survey showing how much time British people spend on the internet might actually surprise you.

The study, which was part of an annual Online Nation report, was carried out by Ofcom and the Information Commissioner's Office. It involved 1,001 children and 2,057 over-16s. The results, which were garnered from 2018 statistics, show that the amount that we spend online is growing. According to the report, the average British adult spends three and a quarter hours a day online last year, which is nearly one day per week when you add it all up.

Despite most adults believing the internet improves their lives, 70 percent believe that there should be stricter rules for social media sites like Facebook and Instagram, according to the Ofcom report. This is up 52 percent from last year. Perhaps this is down to the Cambridge Analytica scandal and other news stories that came out last year. It may also be because of the increasing concern surrounding young people's experiences online, which the Ofcom report clearly demonstrated.

A shocking 79 percent of children claimed that they had experienced at least one potentially harmful experience while online in the past 12 months. And sadly, 51 percent of 12 to 15 year olds have been affected by cyber bullying. Speaking about the concerning results, Yih-Choung Teh from Ofcom said, with online usage, increased use means increased risk:

"As most of us spend more time than ever online, we're increasingly worried about harmful content — and also more likely to come across it. People... recognise the importance of protecting free speech — which is one of the internet's great strengths."

As the BBC explains, "[e]arlier this year the government urged social media companies to take more responsibility for harmful online content which illustrates and promotes methods of suicide and self-harm — named as the second biggest problem by [the Ofcom survey's] younger respondents." The BBC then speaks about the devastating story of 16-year-old Molly Russell to illustrate this point. After Molly took her own life in 2017, her family discovered distressing material about depression and suicide on her Instagram account. "Molly's father Ian says he believes Instagram is partly responsible for his daughter's death," the BBC writes.

Childline counselled 4,541 children about cyber bullying in 2015 and 2016 compared to 2,410 in 2011 and 2012. That's an 88 percent rise. Which is utterly devastating as this means, increasingly, bullies are getting into what should be a child's safe space: their homes. Even scarier still, the people bullying them might never have met them at all. That's the agony and the ecstasy of the internet, it opens up the world but with the good comes to bad.

Hopefully Ofcom's latest study will make people more vigilant about young people's internet use as well as their own.