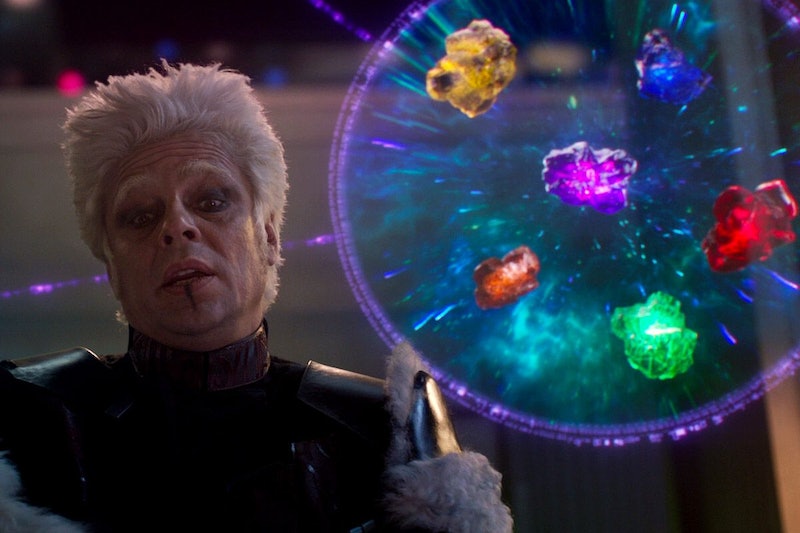 Much like the actual universe, Marvel's Cinematic Universe continues to expand beyond the point of human comprehension. The latest entry, Avengers: Infinity War, is about to join the saga, bringing together not just The Avengers, Doctor Strange, Spider Man, and numerous other Marvel superheroes, but the mysterious objects haunting the last few films — the Infinity Stones. Don't be fooled by the name,; there's a limited amount of these precious gems sought across the universe. But exactly how many Infinity Stones are there? The number is surprisingly few for the immense power with which they shape the Marvel world.

The six stones have popped up in Marvel movies before, and each has been said to have its own unique powers and abilities. A yellow stone powers Loki's treachery in The Avengers, but pops up briefly mid-credit sequence in The Winter Soldier. A red stone nearly rips Asgard apart in Thor: The Dark World, and is handed over to Guardians of the Galaxy's Collector. It's a tangle web these gems weave, but the strands are all drawing together as a massive enemy seeks to unite them all in Infinity War.

Yup, that's Thanos. When your nicknames include "Genocidal Maniac" and "The Most Powerful Being In The Universe", you're clearly not someone to mess around or be mess around with. Thanos is the Titan who's been causing trouble across the galaxy for Marvel's heroes, slowly collecting the Infinity Stones to use in his ultimate weapon, the Infinity Gauntlet. If completed, the Gauntlet would give its user godlike powers over space and time, including nigh-invulnerability and immortality. Avengers: Infinity War will focus on Thanos' attempts to gather the remaining stones.

The first stone introduced in the MCU was the blue Space Stone, inThor's post-credit sequence. It's the power within the Tesseract, and can create wormholes connecting times and planes of existence. Then there's the yellow Mind Stone handed over by Thanos himself, which powered Loki's weapon in The Avengers and merged its intelligence with a computer program to become an enemy in its own right, Ultron. It can boost intelligence, and unlocked the mutant powers of Scarlet Witch and Quicksilver during the credits of Captain America: The Winter Soldier.

Then there's the red Reality Stone, which, as mentioned, was the focus of Thor: The Dark World. Formed into a weapon called Aether, it can be used to turn anything into dark matter, or to drain energy from others. In Guardians of the Galaxy, meanwhile, the purple Power Stone was used by villain Ronan to try and destroy the Guardians. And Dr Strange's powerful amulet, the Eye of Agamotto, actually contains the green Time Stone, capable of exactly what it sounds like, manipulating and controlling time.

The last, and currently least known, of the six stones is the orange Soul Stone. Its color, gleaned from posters and promotional materials, is all that's really known about it; fans expected the stone to make an appearance in Black Panther, but no such luck. Marvel Comics’ Avengers: Infinity War Prelude #2 had the most information yet about this most powerful of Infinity Stones. In the comic, Dr Strange's sidekick Wong says, "Little is known about the sixth and final stone — the Soul Stone — but if what is known turns out to be true, it could prove to be the biggest threat of them all.”

That's still maddeningly vague, but it's the most fans have to go on for now. All six stones are likely to show up in Avengers: Infinity War, but whether the reason for gathering them will come up is another story. Though it seems obvious — gaining immense power, infinite abilities, unstoppable strength, and so on — the reason Thanos wants to collect the stones and gain this power in the comics is actually to impress a girl. Well, Mistress Death, the living embodiment of death in this multiverse... so, a goth girl. Whether she factors into future movies depends on how vast the Marvel Cinematic Universe will become.