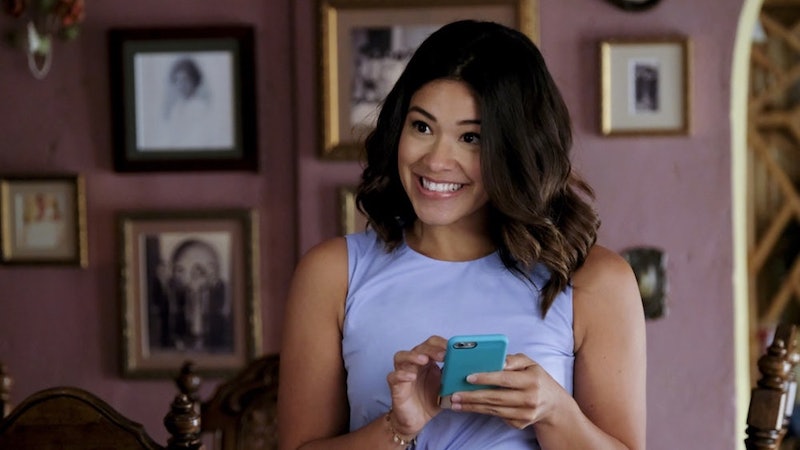 They say that parting is such sweet sorrow, but in all honesty, it's hard to find any sweetness at all in the fact that Jane the Virgin will be coming to an end for good in the upcoming weeks. That means it's important to savor each and every remaining moment we have with these characters, which is why it's worth taking note of how many Jane the Virgin Season 5 episodes are left. And unfortunately, the answer to that question is: far too few.

Last year, executive producer Brad Silberling revealed during an interview with Metro that the final season of Jane the Virgin would consist of 19 episodes and end with its 100th episode, which is how the show's creators had always envisioned it would happen. “It is a wonderful final season of the show,” Silberling told the outlet at the time. “It is exactly as it was laid out… [We’ve] always known when it was going to end. It will be 100 episodes when it’s done and 100 is exactly where Jennie [Snyder Urman, executive producer and creator] always hoped it could end the story. So it’s perfect.”

With that in mind, figuring out how many episodes still remain is fairly easy if you're game for tackling a little bit of math along the way.

If Season 5 contains 19 episodes total and Episode 12 aired last week, that means there are only seven episodes remaining for the entire series. That is definitely not a lot of time left to see how Jane's story will come to a close. The CW recently unveiled Jane the Virgin's series finale date to be on Wednesday, July 31, so start stocking up on tissues now, because with only a handful of episodes left, there's bound to be some very tear-inducing moments still to come.

Speaking of emotional moments, there's plenty of heartfelt scenes to look forward to now that Rafael and Jane are back together. During an interview with TVLine back in March, Urman revealed that there would be a wedding, a pregnancy, and deaths by the time the show comes to a close. “There’s a wedding in the middle of our season this year," the JTV showrunner said at the time. “Jane always has a pregnancy around the season finale, and that will happen." Urman also added that “there are deaths. It’s a telenovela. People are going to have to die.”

It's possible the wedding portion of Urman's statement was in reference to Alba's marriage to Jorge, but that doesn't mean there still couldn't be wedding bells in Raf and Jane's future as well. But if that's the case (or if Jane becomes pregnant again), seven episodes is not a lot of time for all of this to get done. Yet if any show can make it happen and still manage to hit you right in the feels, it would be Jane the Virgin.

It'll be difficult to say goodbye to this series, but every fan can probably agree that it's been a wild and enjoyable ride while it lasted.