There are two kinds of people in this world: Those who think North and Saint West are the most adorable celebrity kids out there, and those who are liars. If you ask me, Kim Kardashian and Kanye West should just keep reproducing if the babies they make together are that sweet and cute, but their opinion obviously counts more than mine. Kardashian has been open about wanting to give her babies more siblings like the ones she has, but what about her husband? How many kids does Kanye West want? If it were up to him, their family would definitely be expanding in the future.

Over the past couple of years, there's been a lot of talk about whether or not the couple will choose to have another baby. Last year, Kardashian said that West had been "mentioning it every single day" during an appearance on Kocktails With Khloé, and now a source close to the family tells People that West would reportedly love to have three or four kids if it's possible. But what's the truth, straight from the rapper? He shared that during an appearance on The Ellen DeGeneres Show in 2015. The interview is a couple of years old, and it's before he and Kardashian welcomed Saint, but his answer is pretty clear. 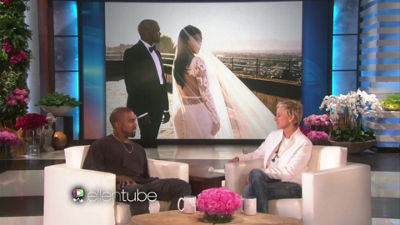 "I just want whatever Kim wants," he said, which is good an answer as any — you know, since his wife is the one who'd be doing all the baby growing and childbirth, which has definitely come with its challenges for her. During her pregnancy with North, Kardashian suffered from preeclampsia and placenta accreta, a complication where her placenta didn't fully detach after birth, and those problems only intensified while she was pregnant with Saint.

But there are lots of ways for West and Kardashian to expand their family, whether they go the natural route or not, so it seems safe to say that Saint won't be their youngest forever — especially since next week's Keeping Up With The Kardashians will touch on her decision to try for her third baby, despite those health risks.

Obviously, their decision is a pretty personal one, but I can't wait to find out how their family will grow in the future. So far, West and Kardashian seem to be awesome parents, so any baby would be lucky to have them!