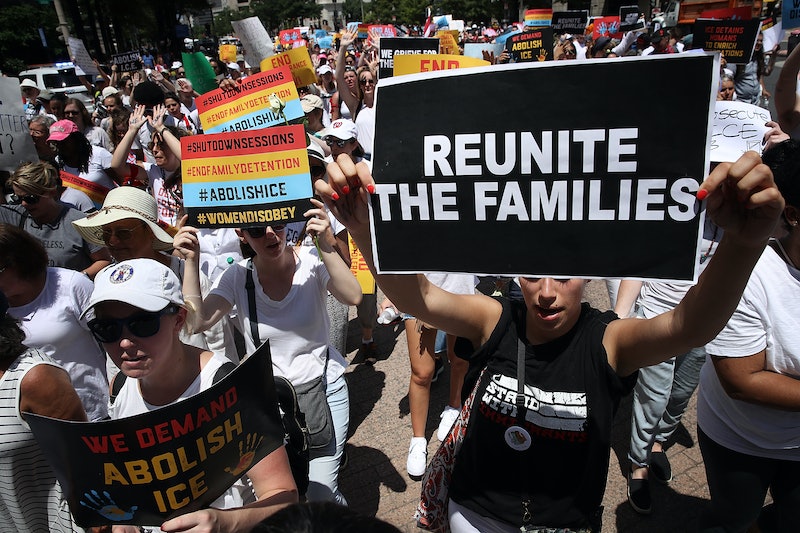 In the wake of the Trump administration's controversial family separation and detainment policy, families are slowly being reunited—but not nearly as quickly as they were supposed to be. If you're wondering how many migrant families Trump has reunited, you're probably going to be disappointed. The administration says that it expects to reunite a total of 38 children with their families by the deadline on Tuesday, which is nowhere near the total 102 children under the age of five years old who are currently eligible for reunification.

What's more, there are reportedly under 3,000 children over the age of five (who are in the next bracket of required reunification), but it's incredibly unlikely the government will reunite those children with their families by the July 26 deadline.

The essential problem with reunification is exactly what opponents of the family separation policy warned it would be from the beginning: it's difficult for the government to locate migrant people who are both afraid of the U.S. government and also in undisclosed locations, often even in other countries.

U.S. District Judge Dana Sabraw, the judge who initially set the deadlines for the Trump administration to meet for reunification, refused to extend the deadline, saying instead, "These are firm deadlines. They’re not aspirational goals."

Since it's likely the government will, in fact, miss the required deadline, Sabraw has asked an attorney from the ACLU to create a proposed punishment for the government for having missed the deadline.

"[The government] needs to respond," he said. "They need to be ... aware of the deadlines. I expect these tasks would be provided today."

There are actually two sets of deadlines that the government was held to (both of which it's likely to miss): the first was by Tuesday, which required that all children under the age of five be reunited with their families. According to USA Today, about 100 children were in that bracket.

The second deadline is July 26, and it requires that all other minors, of which USA Today reports that there are around 3,000, be reunited with their families.

The government has maintained that some children have more complicated cases than others. For example, some parents may pose a threat to their child, some parents have been removed from the country, some are still detained, and so on. However, Sabraw maintained that besides the extenuating cases, all other children must be reunited with their families.

On the same day that the government acknowledged it would not reunite even half of the children under five years old with their families by the established deadline, the Department of Justice also asked a federal judge in California to alter a 1997 settlement called the Flores Settlement that "provides the framework for how to handle detained immigrant children, so it could detain families together for longer periods," according to CBS News.

The judge, Dolly Gee, rejected this request, according to NPR. In her statement, she said, "It is apparent that Defendants' Application is a cynical attempt ... to shift responsibility to the Judiciary for over 20 years of Congressional inaction and ill-considered Executive action that have led to the current stalemate."

Gee also described the effort by the Department of Justice as "dubious and unconvincing," as well as "procedurally improper and wholly without merit."

In other words, the Department of Justice was, in Gee's opinion, looking to shift blame for the Trump administration's poorly received family separation policy. As the government has already missed the first deadline, it's now a waiting game to see what the proposed punishment from Sabaw will be, and whether or not the government will make the July 26 deadline.