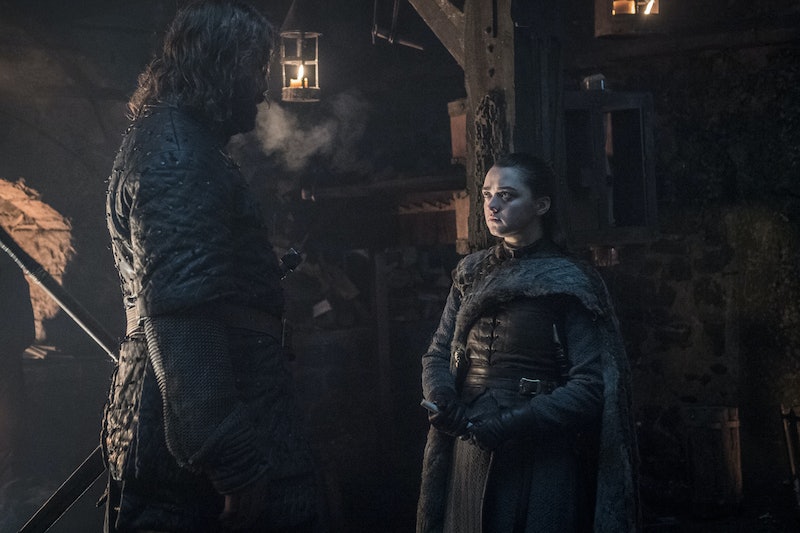 The Season 8 premiere of Game Of Thrones was designed to provoke nostalgia, harkening back to moments from the Season 1 premiere, including a child eager to watch the royal procession. If that moment made you think of young Arya, you may also find yourself wondering how many people Arya has killed, and marveling at how far the Stark girl has come since the show's very first episode. Back then, she was an awkward little girl, cutting out on sewing lessons and besting her brothers at archery and donning an oversized helmet to watch Robert Baratheon and his retinue parade into Winterfell. Now she has one of the highest kill counts of anyone in Westeros.

This point was brought home later in the episode when Arya finally reunited with her long-lost half-brother (er, cousin) Jon Snow. Noticing that she still carried Needle, the sword that he'd given to her before he left to join the Night's Watch, Jon asked her if she'd ever had to use it. "Once or twice," Arya told him. Of course, viewers know that answer is far from the truth; they've seen her use that skinny blade on countless occasions — for self-defense, hot-blooded vengeance, and cold-blooded murder.

Will she ever tell Jon the truth of how many people she's killed? How many people has she killed? It's possible Arya herself has lost count at this point. Let's review:

In this appropriately-titled episode, Arya followed Jon's advice — "Stick 'em with the pointy end" — for the first time, skewering a stable boy who tried to stop her from escaping the Red Keep and turn her over to the Lannisters.

Season 2, Episode 5: "The Ghost Of Harrenhal"

OK, the next few kills were technically committed by Jaqen H'ghar; but after her act of self-defense in Season 1, these were Arya's first real experience with outright murder, so it feels important to include them. And just because she didn't carry them out herself doesn't mean she's not responsible for them. If Jaqen was the bullet, Arya was still the one who aimed the gun and pulled the trigger — in this case, killing the man who had tortured townsfolk to death inside Harrenhal.

The second kill carried out by Jaqen at Arya's command was Tywin Lannister's henchman, Ser Amory Lorch. He caught the young cupbearer in the act of smuggling out Tywin's battle plans, so Arya had the soldier assassinated before he could spill the beans to his lord.

Season 2, Episode 8: "The Prince Of Winterfell"

Waiting too late to name Tywin as her third kill, Arya instead named Jaqen himself — only un-naming him when he promised to help her, Gendry, and Hot Pie escape Harrenhal. In order to carry out this plan, Jaqen committed three more murders for Arya, slaying the three sentries guarding the gate.

Arya's next murder — the first committed by her own hand since Season 1 — didn't come until the Season 3 finale, in the aftermath of the Red Wedding. After seeing her family slain by their Frey hosts, Arya and the Hound happened to cross paths with some Frey soldiers… much to those soldiers' misfortune. Arya savagely took out one with a dagger while the Hound took care of the other three.

The title of the Season 4 premiere referred to Oathkeeper and Widow's Wail, the two Valyrian steel swords forged from the Stark's confiscated greatsword, Ice. But it could also refer to the killer duo of Arya and the Hound, who go on a killing spree together at an inn, taking out some Lannister men — with Arya finally reclaiming Needle from Polliver after losing it to the slimy soldier back in Season 2.

In their wanderings across Westeros, Arya and the Hound ran into Rorge and Biter, Jaqen's two fellow prisoners from back in Season 2. The Hound killed Biter and, after asking his name so he could briefly go on her list, Arya killed Rorge and crossed his name off as quickly as she added it.

Interestingly, Arya's time with the Faceless Men — training to be a member of the most formidable cult of assassins in Westeros or Essos — was relatively death-free. Across nearly two whole seasons spent under Jaqen's tutelage, Arya committed only three murders… and the first can't even rightfully be called that. When a man brought his sick daughter to the House of Black and White, Arya mercifully delivered the gift of the Many-Faced God, giving the girl poison water to drink and relieving her of her pain.

Although Arya was assigned to assassinate "the Thin Man" (a corrupt businessman), she was distracted in her mission by the arrival in Braavos of one of the men on her kill list: Ser Meryn Trant, the knight of the Kingsguard who killed her mentor Syrio Forel back in Season 1. After stealing a disguise from the Hall of Faces and posing as a brothel girl, Arya brutally stabbed Trant in the eyes and chest before slitting his throat.

After failing to carry out yet another assignment in Season 6 (this time declining to kill the kindly actress Lady Crane), Jaqen gave the Waif permission to kill Arya. Fortunately, Arya was able to turn the tables on her would-be murderer, utilizing her blind training to get a leg up on the Waif in the dark. With that, Arya added one more face to the Hall of Faces and quit the Faceless Men, returning to Westeros to enact her own personal vengeance, rather than carry out someone else's murders.

Arya's first stop on her vengeance tour of Westeros was the Twins, where she killed Walder Frey's two favorite sons — Lothar Frey and "Black" Walder Rivers — and baked them into a pie. She then served them to their father before revealing her true identity and slitting the throat of the man who slaughtered her family at the Red Wedding.

In the Season 7 premiere, Arya wiped House Frey off the map in one fell swoop. Wearing Walder Frey's face, she summoned every male member of the family to a feast, at which she berated them all for their role in the Red Wedding, then poisoned them. It's hard to get an exact count on the number of victims here, but there appear to be somewhere around 40 men in that room.

Arya's most recent murder came in the Season 7 finale, when she and Sansa put the manipulative Littlefinger on trial for all of his various crimes against their family. After a rather short and one-sided hearing, Sansa passed the sentence and Arya swung the sword, slitting Petyr Baelish's throat with his own Valyrian steel dagger — the one he had given to the assassin who attempted to kill Bran back in Season 1.

To date, Arya has killed about 60 people, give or take a few Freys. How many more will she kill before the Game comes to an end? With only five episodes to go — and at least one big battle to come — that number is likely to go up quite a bit by the time the credits role on the series finale.