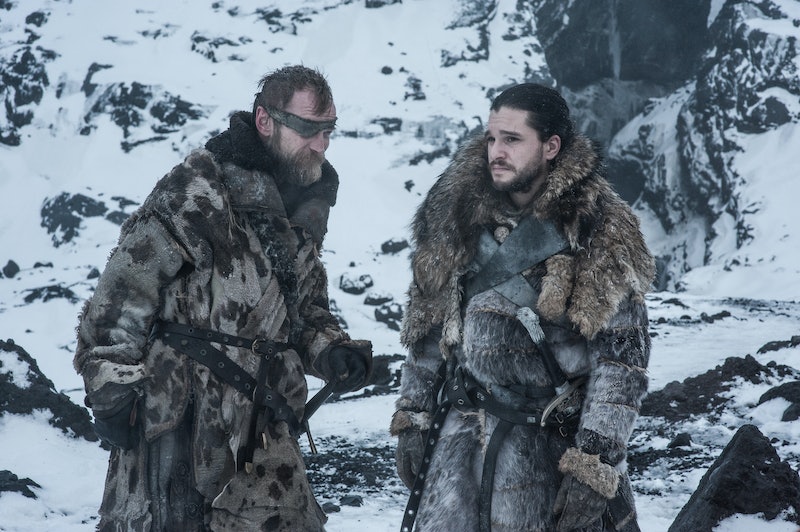 Jon Snow's resurrection on Game of Thrones may have been the most dramatic on the HBO series, but it wasn't the first. How many times has Beric Dondarrion died on Game of Thrones? Now that he and Jon are on a mission beyond the wall together, they should probably compare notes.

Part of the reason that fans suspected the Red Priestess Melisandre might bring the future King in the North back from that knife in the heart is because a Red Priest named Thoros of Myr had already performed that magic on a member of the Brotherhood Without Banners. He actually got pretty good at it.

Beric, the Lord of Blackhaven, has died six times. First he was impaled by the Mountain, and Thoros prayed him back to life without realizing it. He was later stabbed to death, shot with an arrow, had an ax driven into his side, and executed by Lannister soldiers who both stabbed his eye out and hung him. His wounds don't fully heal, so he wears an eyepatch. He also suffers some memory loss each time after having been resurrected Most recently, he was killed by the Hound in a trial by combat.

Why is this important? Not only does Jon finally have a fellow resurrected soldier to chat with, but this mission outside the Wall is surely going to leave some casualties. It's possible that Beric will die again in the fight against wights and White Walkers. Seven is an important number in fantasy stories, and if Beric dies a seventh time that could mean something different, or stick forever. It's also possible that Thoros will perish, leaving him on his last life. Beric could even be turned into a wight or a White Walker.

Heck, Beric Dondarrion might be Azor Ahai reborn the way he's carrying a flaming sword in the preview and the above photograph. In the Azor Ahai legend, the hero caries a similar weapon called Lightbringer. Would Game of Thrones make solving this mystery that easy?

Even if he makes it back alive from this mission alive, Arya did at one point put Beric and Thoros on her death list for the way they sold Gendry to Melisandre. In the books, Beric gives his final life as a sacrifice to resurrect Catelyn Stark as Lady Stoneheart. Some have theorized that Arya is herself becoming like Lady Stoneheart. All in all, it's very interesting that Beric has merged back on the scene at this time.

The number of times he has died prove that this leader of the Brotherhood Without Banners is one of the toughest characters on Game of Thrones, and possibly a little reckless. Unfortunately for him, the stakes are raised in the war to come, and his life is in just as much danger as everyone else's.