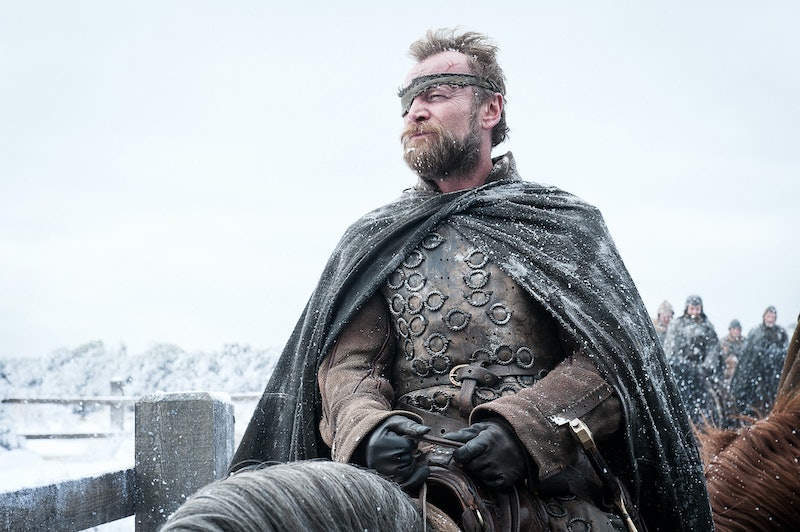 With only 13 episodes left in its run, HBO's hit fantasy series will have to get around to answering some of its long-running questions soon. Fortunately, these Game Of Thrones Season 7 Azor Ahai theories could help fans solve the mystery for themselves before the identity of the Prince That Was Promised is revealed on the show. The question of R'hllor's prophesied champion against the White Walkers has lingered since Melisandre's introduction in Season 2 — and it's about time the mystery is solved.

Originally, the Red Priestess believed that Stannis Baratheon would be the savior to lead the people against the Night King — but that interpretation of the prophecy obviously turned out to be false when Stannis was slain by Brienne of Tarth in the Season 5 finale. As the show has gone on, the list of possible candidates has decreased even further, with some — like Stannis — eliminated by their deaths, and others — like Victarion Greyjoy and Aegon Targaryen — eliminated by the simple fact that their characters didn't make the leap from the pages of the Game of Thrones books to the TV screen.

As Thrones enters its endgame, it's looking increasingly like there are only seven possible candidates remaining.

The most popular theory still makes the most sense. Jon Snow is the most traditional "hero" of this story, he has both ice (Lyanna Stark) and fire (Rhaegar Targaryen) inside of him, he wields a sword capable of killing White Walkers, and — oh yeah — he was literally resurrected by Melisandre. Really, the only mark against the "Jon Snow is Azor Ahai" theory is that it's too obvious. Surely George R.R. Martin has something a bit more surprising planned for his ending?

Just as Melisandre switched her Azor Ahai interpretation from Stannis to Jon Snow, Westeros will see the arrival of another promising candidate that will throw the red woman's convictions into even greater turmoil. Viewers have already seen that Red Priestesses in Essos believe that Daenerys is the Lord Of Light's chosen representative. And it turns out that a simple matter of mistranslation could have led generations of R'hllor acolytes to be looking for a Prince when they should have been looking for a Princess.

If both Jon and Dany as candidates are too obvious for your tastes, then how about a slightly more bizarre theory? This idea that Jaime Lannister is Azor Ahai, as explained by Reddit user byrd82, also centers around a mistranslation of ancient Valyrian; except instead of the gender of the savior, the mistranslated words were "lord" and "light." In Valyrian, those are "aeksio" and "onos"; meanwhile, the Valyrian words "aeksion" and "ondos" translate to "gold" and "hand."

Should the red priests have been looking for a savior with a "golden hand" this whole time? Someone like… the Kingslayer? And if theories are correct and Jaime kills Cersei in Season 7, that would fulfill the part of the prophecy in which Azor Ahai has to kill his wife in order to fulfill his destiny.

Given his burgeoning magical powers, there are a lot of theories out there about Bran and his role in the show's endgame. Some fans think he's the Night King; others think he's the Lord Of Light himself. Still others, like Reddit user gaseous-clay, believe that Bran is Azor Ahai. In this scenario, the Stark boy is the one who is destined to lead the armies of men against the White Walkers, and his weapon — the fabled Lightbringer — isn't a sword, but a person: Jon Snow.

Will Bran use his surrogate brother as a tool in the upcoming battle against the Night King? If so, who will Bran have to sacrifice to fulfill his prophecy? Will it be Meera, his protector? Sansa, the Lady of Winterfell? Arya, newly returned to Westeros? Any way you slice it, this would be a tragic turn of events.

This is getting into some conspiracy theory-level speculation. The Prince That Was Promised is a hero who will "fight for the living," as Melisandre states on multiple occasions. As such, it's generally believed that the Prince will lead the armies of men against the White Walkers. But what if the White Walkers aren't evil? What if the evil men have to be protected against is themselves?

This whole theory hinges on the mystery of what the White Walkers want — and, given that Westeros is on the verge of being destroyed in a fiery apocalypse between the collision of Dany's dragons and Cersei's wildfire, what if the White Walkers are marching south in order to forestall this impending inferno and save humanity from itself? If the Night King uses his icy power to neutralize the fires of destruction, he could very well turn out to be the hero who "fights for the living."

(Or maybe not. But it's fun to think about!)

This would be a major departure from the books, considering that Beric is no longer alive on the page, having given his life to resurrect Lady Stoneheart. But what if the show is forging its own path by setting up Beric Dondarrion to be Azor Ahai? Like Jon Snow, he fulfills the prerequisite of having been brought back to life, and he also wields a flaming sword, just like Lightbringer.

Given that George R.R. Martin's series literally can't end this way, this turn of events would undoubtedly be the most surprising to readers and non-readers alike… which is why it seems like exactly the kind of thing the show might do.

Yes, there really are people out there who think Tommen's pet kitten is the Prince That Was Promised, and the evidence is… actually fairly compelling in a tin foil hat kind of way.

Will Azor Ahai turn out to be one of these seven characters? Or will it be a character that absolutely no one expected? Hopefully fans will finally find out during Game Of Thrones Season 7.