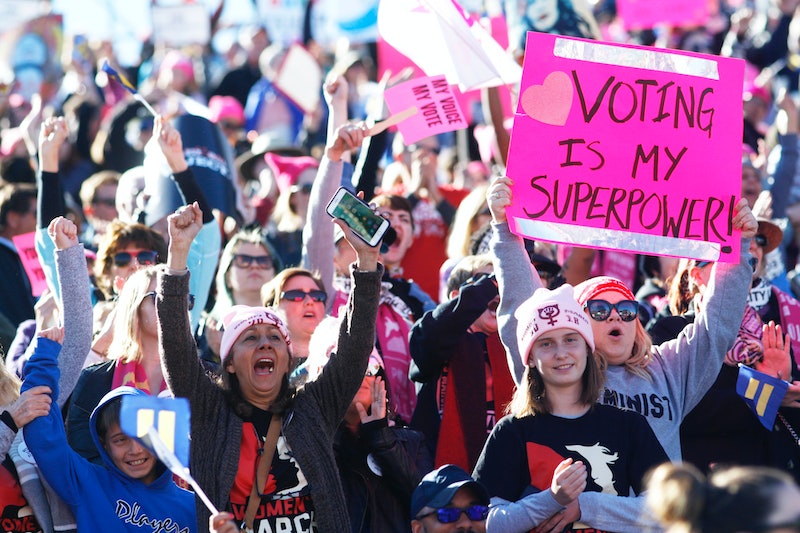 The face of American politics could very well change this year. According to an Associated Press, a record number of American women are vying for House seats in the United States Congress.

The Thursday report said that the previous record number for American women running was 298 in 2012. Now, galvanized by issues in health care, education, gender inequality in the workplace, and — for many — resistance against President Donald Trump, 309 women have applied as candidates for the House in 2018. One of the aspiring contenders, Democrat Kara Eastmen of Nebraska, told AP that "it's about time."

According to AP, it reviewed data from the Center for American Women and Rutgers University in order to see the extent to which women's momentum for seeking House seats changed over 26 years. The data followed women's candidacy applications from 1992 to 2018.

A majority of the women vying for a House seat this year are running on a Democratic platform. According to AP, many were inspired by the Women's March in 2017 to become politically active in their own states. EMILY's List's Vice President for Communications Christina Reynolds tells Bustle that the record number is proof of increasing resentment against Trump and the Republican party. Reynolds says,

Women will make history not only by running, but by winning in record numbers this November. They're fed up of the chaos of Donald Trump and Paul Ryan's Capitol Hill, and ready to fight back against a Republican agenda that hurts families across this country.

She also is optimistic for Democratic women who "will flip the House, and bring the majority back to the party that actually supports women's rights."

Yet not all of the women running are Democrats. A few, such as Tiffany Shedd of Arizona, hail from the Republican Party. Shedd told AP that she was encouraged to see so many women running to win positions in the House and that she hoped that ideological differences could be put aside. "I hope that we eventually live in a world where there’s no articles written about that because it’s no longer a thing," Shedd told the outlet.

For Reynolds, there is a reason why the majority of the women in the study are Democrats. "Democratic women are the vast majority of this historic number of candidates. In fact, there haven't been this few Republican women running for the House since 2008," Reynolds tells Bustle. "That's because for a prospective woman candidate, the choice is easy. Democrats fight for equal pay and reproductive health care. The GOP want to take us back to the 1950s."

At the moment, according to the Center of American Women and Politics, only 19.6 percent of the Congress is female. That means there are 535 Congress members and only 105 are women. Of those 105 women, 78 of them are Democrats while 27 are members of the Republican Party.

Even with a record-breaking number reported by AP, women will have to work hard to unseat their male rivals. It may come down to robust campaigns, among other things. As it is with any political election, candidates often struggle with weak campaign financing (which has been written about time and again) as well as leaving a solid impression on locals when they're pitted against often much more famous political candidates.

But brand new and eager candidate need not be discouraged; the AP notes that there's one advantage for women running right now and it points to empty seats left behind by resigned or retired politicians. Those could prove to be beneficial to the women running and perhaps eventually change the course of American politics.