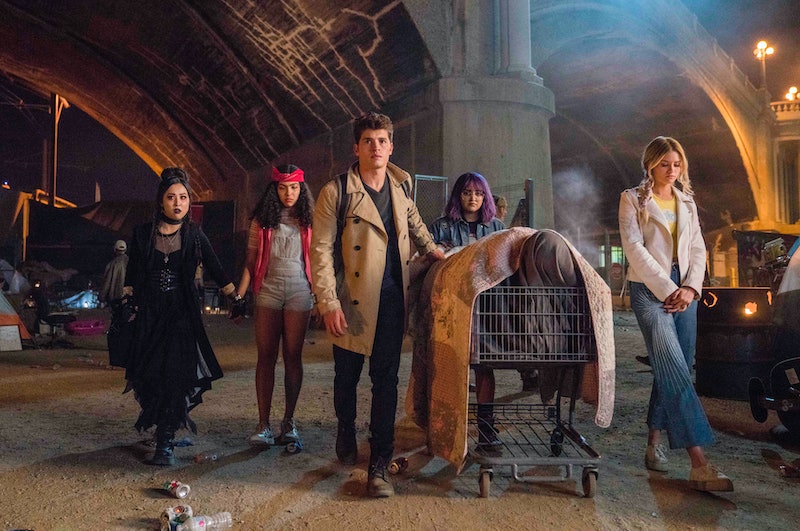 The heroes of Marvel's Runaways have plenty of threats of their own to deal with in Season 2 of the Hulu series, but it's pretty fun to consider what other hijinks could ensue given the fact that they technically exist in the same cinematic universe as Agents of S.H.I.E.L.D., baby Groot, and Matt Murdock. At a roundtable interview during New York Comic-Con, the Runaways cast discussed what being in the Marvel Cinematic Universe could mean for their characters.

For all intents and purposes, Season 2 takes place before Infinity War, so don't worry about Thanos' snap. That said, in the comics, the Runaways encounter Marvel's finest on a few of their adventures. Most memorably, the little but fierce Molly fights Wolverine — Logan himself — after being taken in by frenemies Tony Stark and Steve Rogers.

"If Molly could recreate the Wolverine scene from the comic book that would be the most iconic thing ever," says Allegra Acosta. Like her character, Acosta seems to be the most enthusiastic about being a part of the MCU. From across the room, I overhear her telling other reporters how she's hoping a deal with Fox, who owns rights to the X-Men and the term mutant in the Marvel context, goes through so that they can say "the m-word" on Runaways.

"I think Molly wants to be an Avenger," Acosta continues. She "wants to be in the X-Men. That's what she wants to do initially with the Runaways, that's literally her underlying text for every line she says, or every scene she does. She wants them to be this kind of phenomenon group that helps the world."

Not only are Molly, Gert, Karolina, Nico, Alex, and Chase on the run from their evil parents, they're discovering these supernatural abilities and coming to terms with that power in Season 2 — whether it's an ability they have inside them or some kind of device.

"Oof! I think Chase is having fun with the fistiguns in Season 2," says Gregg Sulkin. "There's a lot of training that happens, superpower kind of training, so I think Chase really does like ... I think he secretly loves, and really respects, and kind of admires anything to do with superpowers."

Do you think the Runaways also had to watch those Captain America PSAs in Health class, or was that specific to the New York school system? Spider-Man: Homecoming touched on what it's like to be a teenager in the MCU, and the Runaways are technically living the same experience, just on the other side of the continental United States.

"I can only speak for what I think Gert thinks," says Ariela Barer, "but I imagine [she's a] huge fan of Jessica Jones.... Luke Cage is also kind of amazing." Of all the Runaways, Gert as an activist would definitely be the one who knew about the street level heroes of Manhattan.

Figuring out your place in the world is hard enough for any teenager. Maybe it's relieving for the Runaways to know that they aren't the only people they know with superpowers, the ability to time travel, evil relatives, or alien blood in the universe. They may be dealing with some major revelations about their parents, but at least they're not alone.