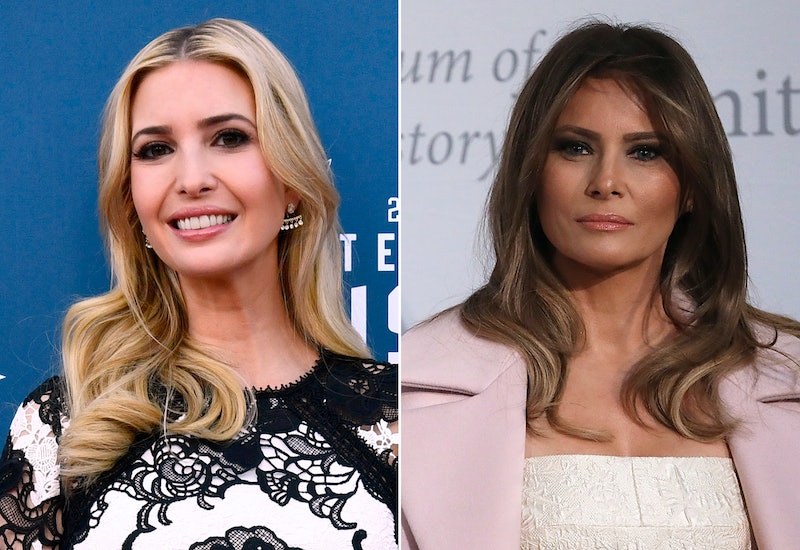 The first lady is usually a visible and well-loved part of every administration. For much of Donald Trump's first year in office, however, Melania Trump kept a very low and enigmatic profile — while First Daughter Ivanka Trump played what seemed to be a role much more akin to the first lady's. However, according to a new profile from The Washington Post, Melania Trump is taking over the position Ivanka Trump once held. Whereas the first daughter's position in the administration seemed to peak early on, Melania Trump's has been steadily gaining, and it's evident in the roles that she's gradually been taking on.

Fortune described Ivanka Trump's first year in the White House, and it was a tumultuous one. While she initially claimed that she would only play the role of a daughter, she was soon appearing at important meetings with foreign dignitaries and representing the United States at home and abroad, eventually gaining security clearance and an official White House role.

While Melania Trump was still living in New York City with her son, Barron, her stepdaughter was meeting with Canadian Prime Minister Justin Trudeau and going to Berlin for a summit on women's empowerment. The title of a British documentary made in May 2017 asked, "Ivanka Trump: America's Real First Lady?"

With all of that visibility, though, came criticism. She didn't come to the White House job with any qualifications for it, The Washington Post pointed out, and she repeatedly failed to win out on issues on which she butted heads with her father, like the decision of whether or not to pull out of the Paris climate accords. And, more recently, The New York Times reported that President Trump himself would like Ivanka Trump and Jared Kushner out of the White House.

Melania Trump, on the other hand, didn't receive much pointed criticism during Donald Trump's first year in office, because as Vogue described in a January profile, she used her position as first lady for very little. She appeared at public events, she decorated the White House for Christmas, she went on the president's overseas trip — and grabbed headlines by appearing to swat her husband's hand away.

It's typical for first ladies to have a cause that they dedicate themselves to, and Melania Trump announced that hers would be cyberbullying in 2016, when she was still on the campaign trail, according to Vanity Fair. This was met with ridicule, given her husband's Twitter persona. Her first major step forward in terms of that cause came at a listening session with various tech executives that she held in March, though, and she met that criticism head on.

“I am well aware that people are skeptical of me discussing this topic,” the first lady said at the session, according to Vanity Fair. “I have been criticized for my commitment to tackling this issue, and I know that will continue. But it will not stop me from doing what I know is right.”

She also recently hosted her first state dinner, gaining praise for her preparation and poise. Trump nodded to her predecessors by including Michelle Obama's greens on the menu, and she exercised her background as a designer. As the current first lady, Trump also represented the administration at the funeral of former First Lady Barbara Bush.

While the nation hasn't yet witnessed Melania Trump diving into policy issues the way that Ivanka Trump has, her increased visibility is still a major step for a woman whom The Washington Post describes as an intensely private person. Anything that she does comes with a background of scrutiny that her stepdaughter doesn't necessarily receive; first ladies aren't expected to have qualifications for their roles, for example. Ivanka Trump also doesn't face the same question that looms over everything that Melania Trump does — what is her response to the rumors of her husband's multiple affairs, even if he denies them?

All in all, neither the first lady nor first daughter appears to have settled into an unchanging role — so there's no telling how their relative positions might progress as time goes on.

More like this
Are John Legend & Kanye West Still Friends? The Singer’s Latest Update Is Candid
By Brad Witter
Rishi Sunak's Wife Is Worth More Than The Queen
By El Hunt
Christina Aguilera Took A Powerful Stand At Brighton Pride
By Sam Ramsden
Beyoncé & Madonna’s “Break My Soul” Remix Honors A Group Of Black Icons
By Stephanie Topacio Long
Get Even More From Bustle — Sign Up For The Newsletter