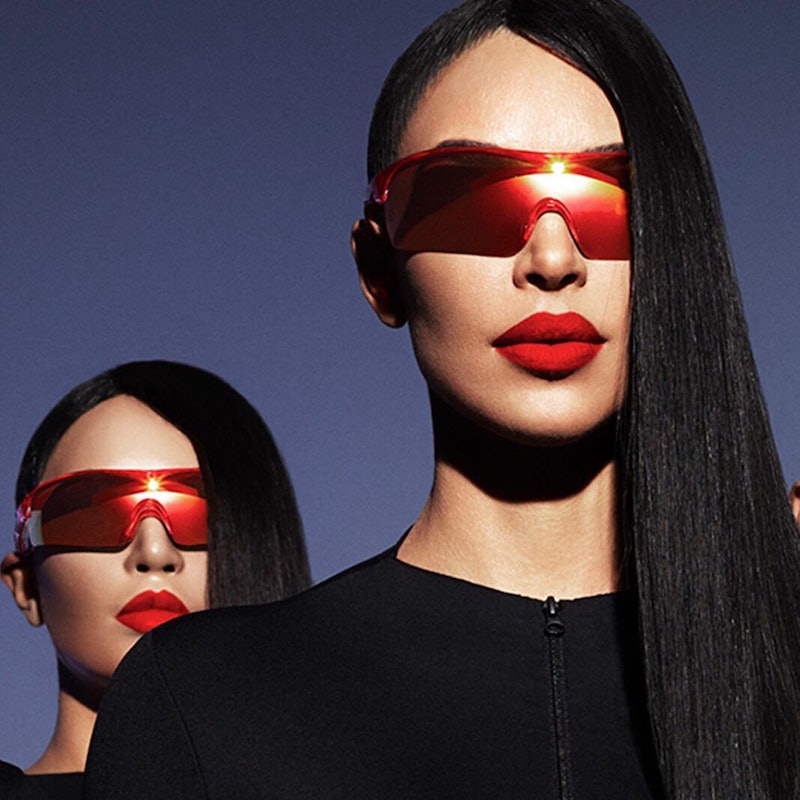 While Kim Kardashian may have created her own beauty and fragrance brands, she has yet to parlay those successes into the fashion industry. Now, however, Carolina Lemke x Kim Kardashian sunglasses are coming, and the collab is a style match that's made in heaven.

While Kardashian's husband Kanye West has his own line of clothes and accessories, Kardashian has stayed pretty firmly in the beauty world. Despite wearing incredible designer pieces and making a splash on basically every red carpet and with each new Instagram, it's been all about KKW Beauty and KKW Fragrance for the reality television star. Her partnership with Carolina Lemke is changing that.

The magazine reports that Kardashian plans to have multiple collection released with Carolina Lemke throughout the rest of the year. Don't worry, though. You're not going to have to wait for the first drop. All seven of Kardashian's first collection of sunglasses are available today, April 2. From shield style lens to tiny 90s styles that Kardashian has already shown off online, each pair is up for grabs right now at the Carolina Lemke website.

While the fact that the glasses are available right now is certainly good news for fans of Kardashian, the sunnies get even better. None of the Kardashian designed specks are over over $100. In fact, every pair in the collection retails for $90. If you were concerned about being able to affordable a pair of sunnies from the collection, you may just be able to snag them now, or if not, saving for them may not be as difficult as you assumed.

Speaking to Vogue, Kardashian explains that part of her motivation for working with Carolina Lemke actually came from their affordable price point. She cited the high price point that some sunnies can reach, especially for those who lose their glasses or scratch them often. The brand's affordability and quality combined with Kardashian's ability to be hands on in the design process made the decision easy for the reality television star.

While Kardashian's sunglasses may be available now, they actually first started going viral back in March thanks to the campaign. The KKW Beauty mogul and the brand enlisted Kardashian look-a-likes to pose alongside Kardashian, and to say the images are a little creepy would probably be fair.

Clearly, though, Kardashian realized how popular the photos were because on April 1, she showcased the PR boxes that would be sent out to influencers and friends. Inside the boxes were the very masks that the look-a-likes wore in the photoshoots. Atop the masks of Kardashian's face were a pair of glasses picked out by Kardashian herself. Again, eery but very Kardashian.

While you may not be getting a Kardashian mask with your Kim Kardashian x Carolina Lemke purchase, the price of the sunglasses is definitely enough of a perk to stop shopping. If you want your own pair of Kardashian created sunnies, you can head to the Carolina Lemke website now.