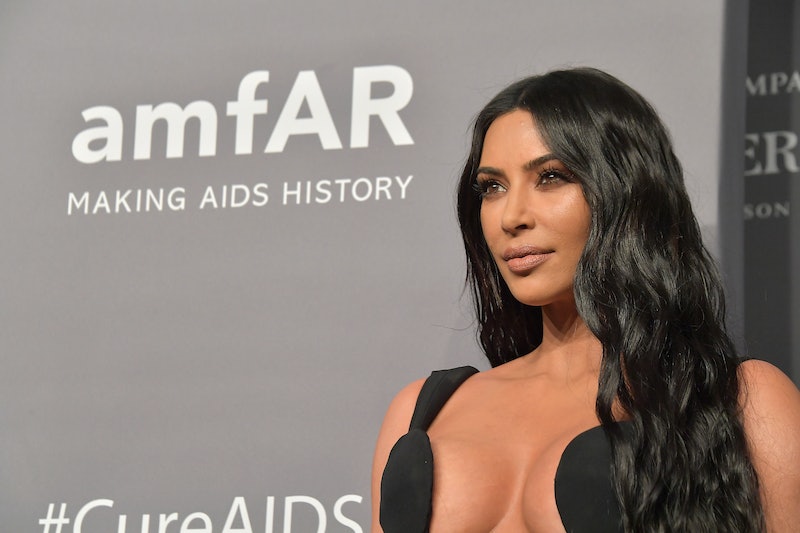 When it comes to celebrities, there are certain fan favorites who know how to serve a look. From Lady Gaga's periwinkle hair at the Golden Globes to Cardi B's 2019 Grammys dress, some style stars never disappoint. Joining them is Kim Kardashian's vintage Mugler dress which may be one of her most iconic looks ever. The extreme cut-out dress had her fans on Twitter going wild, and once you see the look, you'll understand why.

On Sunday, Kardashian took to her Instagram and Twitter accounts to showcase herself wearing a gorgeous black, vintage Thierry Mugler gown from 1998. The KKW Beauty founder and reality television star attended the 5th Annual Hollywood Beauty Awards with longtime hairstylist Chris Appleton who was up for an award. To say that Kardashian deserved a double take in her Mugler dress would be an understatement.

The vintage gown featured less cut-outs and more straps than anything else. The dress circled around Kardashian's neck and flared out into an X shape that just barely covered her breasts. From the center of the X, a velvet piece of fabric came down to connect with the skirt which featured a slit just about her mid thigh. The dress was daring, a total eye catcher, and oh so Kim Kardashian.

Honestly, the Mugler gown may be one of Kardashian's most daring looks, and it could also become one of her most iconic.

As for how fans felt about the look? They were obsessed, and who could possibly blame them? When Kardashian posted the look to her Twitter account, fans were immediately taken with the vintage gown.

Of course, fans were quick to point out that fast fashion brands would probably be rushing to make a copy of the dress. In fact, it's something Kardashian has made light of recently.

Other fans' wigs were snatched thanks to the gown.

If the name Mugler sounds familiar to you, it should for two reasons. The first being that Thierry Mugler is a renowned French fashion designer. The second, however, is that this isn't the first vintage piece of the designer's that pop culture lovers have seen lately.

If you watched the Grammy's red carpet, you couldn't have missed Cardi B's Birth of Venus inspired gown. The dramatic gown featured pearls, a shell-like silhouette, and a velvet skirt that came to make it a total show stopper. As it turn outs, the gown was also a Mugler vintage piece. According to Women's Wear Daily, when Cardi wore the dress to the Grammy Awards, it was just the second time a celebrity had worn a piece from the designer's archives. Now, it seems that Kim Kardashian can join that list.

While Kim Kardashian has worn many memorable looks (like her gorgeous Richardo Tisci designed wedding gown), this one is definitely going in the Kardashian archives right alongside them. While the dress may be a vintage piece, Kardashian rocked it like it could have been made for her alone.