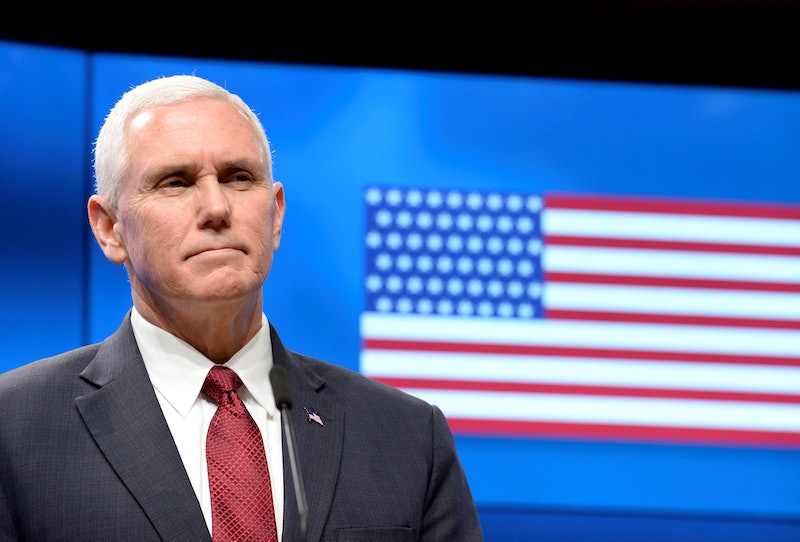 On Sunday afternoon, Mike Pence was at the Colts-49ers game in Indiana one minute and gone the next. After some NFL players decided to kneel during the National Anthem, as they had during prior games, Pence and his wife, Karen, left their seats and presumably flew back in a private jet to Los Angeles for an event. After a tweet from Trump suggested Pence's walk-out was preplanned, the cost of the otherwise pointless trip fell under scrutiny.

On Oct. 8, Trump tweeted, "I asked @VP Pence to leave stadium if any players kneeled, disrespecting our country. I am proud of him and @SecondLady Karen." Then, in a move that both satisfied critics' suspicions and enraged them, Trump tweeted on Monday that, "The trip by @VP Pence was long planned. He is receiving great praise for leaving game after the players showed such disrespect for country!"

So, yes, the move was pre-planned, meaning that the flight from Las Vegas to Indiana was for the sake of what some Democratic lawmakers are calling a "political stunt." Theoretically, if Pence had just skipped out on the NFL game, he could have flown straight from Las Vegas to Los Angeles.

But it wasn't just Trump's commands for Pence that made people mad. It was the fact that ultimately, taxpayers funded the vice-president's travel.

As the Huffington Post pointed out, Air Force 2 costs about $16,000 each hour to operate. If Pence racked up over 6 hours of time in the sky, that means his flight costed over $100,000. If Pence had just cut the NFL game he reportedly knew he'd end up leaving anyway, he could have flown straight to L.A., which would have costed just $16,000. CNN, on the contrary, suggested an hour of flight time on Air Force 2 costs $30,000, "according to the Air Force." CNN also claimed that a flight from Las Vegas to L.A. would have costed $45,000. It's difficult to know which measure is correct. Regardless, the RNC is expected to fund a portion of the trip.

Pence's aide, however, told CNN that the Las Vegas part of the trip was tacked on to the schedule at the last minute, trying to defend Pence against taxpayers' arguments that he wasted their money.

The Vice President was not going to miss the Las Vegas memorial prayer walk on Saturday, which he was honored to attend on behalf of President Trump. If the Vice President did not go to Indiana for the Colts game, he would have flown back to D.C. for the evening — which means flying directly over Indiana. Instead, he made a shorter trip to Indiana for a game that was on his schedule for several weeks.

In a Trump Make America Great Again Committee email, according to The Hill, the president invoked Pence's walk-out to raise campaign money.

Yesterday members of the San Francisco 49ers took a knee during our National Anthem. Their stunt showed the world that they don’t believe our flag is worth standing for. But your Vice President REFUSED to dignify their disrespect for our anthem, our flag, and the many brave soldiers who have died for their freedoms.

It isn't just Pence who's raising eyebrows with his travel. Though Trump's frequent trips to Ma-A-Lago and other resorts haven't exceeded Obama's travel expenses over the course of eight years, the president is on track to out-spend his predecessor if his habits continue. Still, it's too early to tell what the final numbers will be. If the administration takes public outrage into account though, it won't be sending Pence on any more supposed wild goose chases.