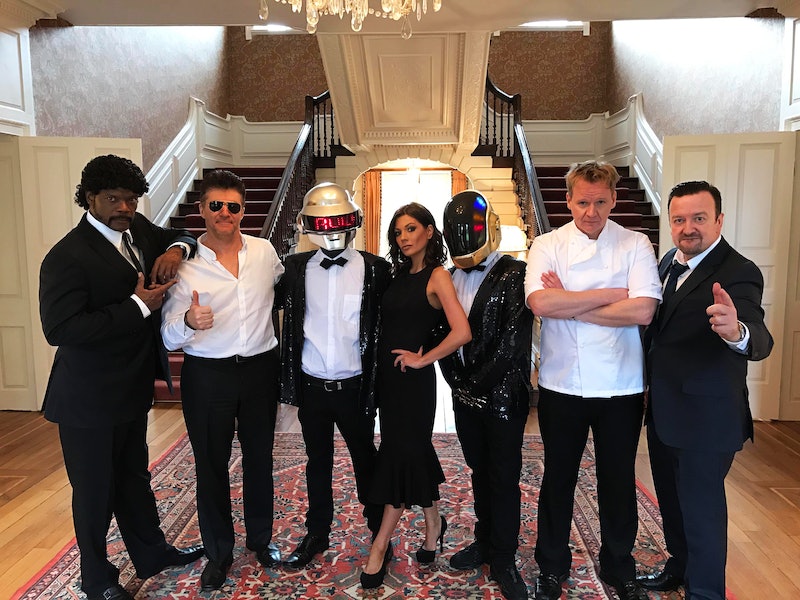 A new documentary taking a behind-the-scenes peek at the lives of celebrity lookalikes is set to air it's second series on Channel 4 on Wednesday night. The show is called Lookalikes, and is centred around a lookalikes agency in Eastbourne — documenting the day-to-day lives of some celebrity mirror images (or at least almost mirror images), including Gordon Ramsay, Samuel L. Jackson, David Beckham, and even a David Brent lookalike. But how much do celebrity lookalikes get paid?

According to the Daily Mail, it very much depends on the celebrity you are impersonating. Dave Evans, a full time Robbie Williams lookalike, says he gets around four bookings a week — with each one bringing in between £250 and £500. "Since 2002 I've been living as Robbie Williams," he told the paper, "and lapping up the female attention it brings ... Since registering with the lookalikes agency I've earned a small fortune."

Camilla Shadbolt is a Victoria Beckham lookalike, and says she can earn as much a £10,000 for a single job. "I even appear in the Spice Girls Tesco advert in the shot of the five girls walking into the store," she told the Daily Mail. "Victoria wasn't on set in time, so I stood in. I have to keep up with all her changing hairstyles, the copious amounts of fake tan and her fabulous clothes. But mine are all high street copies of her designer wardrobe."

While Shadbolt and Evans work full time in their doppelgänger careers, some people do lookalike work around other jobs.

To find out a little more about what it's like to be a lookalike for a living, I spoke to one of the celebrity doubles featured on the Channel 4 show Lookalikes — Martin Jordan, a Gordon Ramsay lookalike. "I've been doing it for ten years now," he tells me. "And I was basically nudged into it. It was my brother who spotted it, after he saw a photo of me on holiday. Then a few people started telling me I looked like Gordon, usually in pubs or clubs. I was a bit reluctant at first. I didn't think I'd enjoy it. But then I signed with an agency and did a few weddings. It's a real honour to be asked to work at someone's wedding."

Jordan tells me he is fortunate to be a lookalike for Ramsay, as that means he often gets to do more food-oriented appearances — handing out canapés, or pretending to cook. Of course, the emphasis really is on pretending, he says, as he confesses he actually can't cook.

However, beyond this, he tries to put on a show, and has worked hard on nailing the Ramsay character. "I only want to do it if I can do it as good as I can," he says. "At first I was uncomfortable with all the swearing, but now I just see it as an act."

But what's the best part of being a professional celebrity lookalike? Jordan tells me it's that every day is different and can take you anywhere. This year alone, Jordan has travelled to some pretty amazing places, including Mongolia and Alicante. However, he does say it's a little harder than people might imagine: "People say to me 'I'd love to be a lookalike'. But they don't always see the hard side of it. The lonely miles travelling in your car."

Ultimately, he's pleased the show will be offering a candid look into the life of a lookalike. "At the end of the day, we just love what we do," he explains.

Lookalikes is on Channel 4, Wednesdays at 10 p.m.