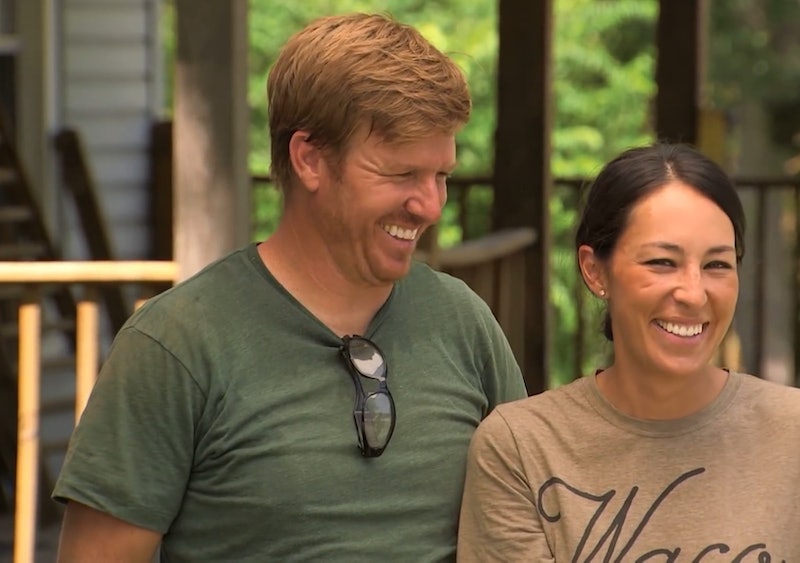 Watching Chip and Joanna Gaines pull off impressively quality renovations in Texas on a budget has, essentially, become a ritual at this point for HGTV fans. Decrepit, flimsy walls? No problem. Mold in the basement? They got it. A literal hole in the ceiling? Who the heck cares? As the final season of Fixer Upper begins to wind down, longtime fans are no doubt reflecting on some of the more miraculous transformations that the adorable duo have pulled off over the course of their run. The frugality of the show almost seems too good to be true, so how much do Fixer Upper renovations really cost the show's participants?

Well, despite the fact that the show is technically aimed at people trying to stretch a small amount of cash, there have reportedly been stipulations in terms of the minimum budget the show's contestants must be able to spend. (Bustle reached out to HGTV for comment but has not yet heard back.)

According to Country Living magazine, at least $30,000 is reportedly required to be allotted for Fixer Upper renovations alone — that doesn't include any furniture or additional purchases for the house. The magazine reported last year that the application questionnaire (which has since been taken down after the final season was cast), also reportedly said that "financial contribution should be proportional to the amount of renovations your new home will need."

It's worth noting though, that the reported $30,000 is only the renovation budget — Country Living magazine also reported that the participants have to either already own a home or land (which is a pretty interesting behind-the-scenes claim, given that a big part of what viewers see is a house hunting endeavor), or they have to have additional money for the purchase of a house. Some people reportedly do already have a home when they approach the show, apparently — Country Magazine reports in the same article that there was even a slot in the Q&A application that allowed possible participants to upload a photo of their home, and to answer questions about some of the home's structural details. Because the show does always go through home buying options, it seems like they still incorporate the cost of the house into what viewers see, even though they may allegedly stage the actual purchasing process.

So while there might be some backstage magic thrown into the show in the event of the participant already having a home, and while $30,000 is a lot of money, that cost isn't exactly unrealistic when working on large-scale renovations. It's especially reasonable when you take into account the budgets some contestants boast on other HGTV shows — if I see one more 25-year-old couple who somehow is able to spend $2.5 million on a kindergarten teacher's salary, I'm going to scream.

Even if you do have the cash and the mission to appear on the show, it's unfortunately way too late for a chance to apply — Chip and Joanna announced that the current fifth season would be Fixer Upper's last. Chip told the Today Show in September that they were excited to step back from a rigorous filming schedule in order to place more focus on their marriage and their family.

"The most important thing in the world is Jo and I's relationship, followed very quickly by these four beautiful kids," Chip told the show. "And we didn't want to push it, red line it, for so long that we woke up and realized, we are at a point of no return. So, we wanted to take a step back and focus on the thing that was absolutely the most important thing to us in the world, which is Jo and I's relationship."

Viewers who have come to love the couple's relationship can certainly appreciate that, and with a spinoff soon airing on HGTV, there's still plenty more Gaines content to devour. Fixer Upper: Behind The Design debuts in April and will be based on behind-the-scenes footage of past Fixer Upper renos, meaning that fans will be living vicariously through past participants for a long time to come.

More like this
Twitter Is Saying The Same Thing About Jill Scott Winning 'I’m A Celeb'
By Sophie McEvoy
BBC’s Gladiators Reboot Is Staying Close To The Original ‘90s Phenomenon
By Sophie McEvoy
Yes, That Is Victoria & Another ‘BiP’ Alum In Zach’s ‘Bachelor’ Trailer
By Kadin Burnett and Grace Wehniainen
Why Wasn't Teddi At The 'Bachelor In Paradise' Reunion?
By Brad Witter
Get Even More From Bustle — Sign Up For The Newsletter