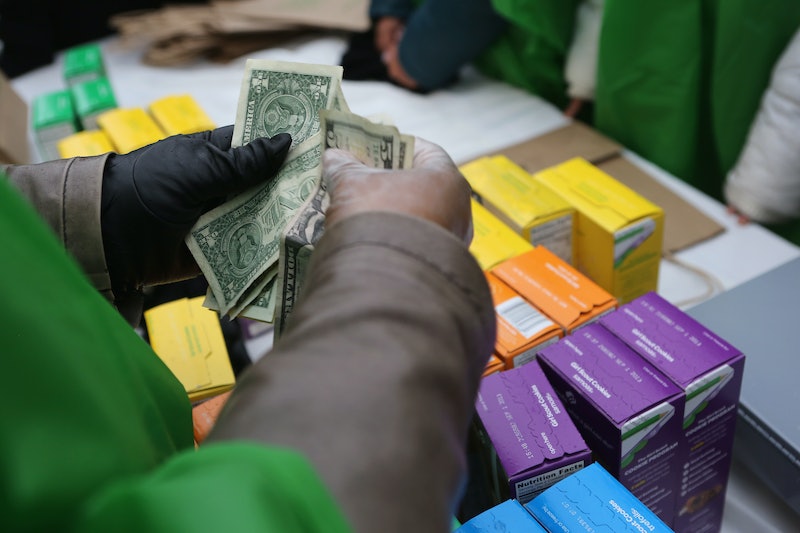 The dead of winter can be a pretty bleak time, full of intense cold temperatures and not nearly enough sunshine. But there's one thing that can make everything better: Girl Scout cookies. The mere thought of biting into a crunch Thin Mint or a sweet Samoa cookie is enough to get most people through even the most bomb cyclone of snow storms. There's already an official countdown to when we can purchase Girl Scout cookies (hint: it's a lot sooner than you think, aka now!), and now we all just have to start saving our money for them. These cookies are worth the cost (I mean, have you tasted a Samoa? It's heavenly) and I don't know about you, but I want to be able to buy as much as possible this year (how else are we supposed to get through another year of the Trump presidency?). Which begs the question: how much do Girl Scout cookies cost in 2018?

As you likely remember, the year 2017 saw a price increase in Girl Scout cookies across many markets. While the price does vary depending on where they're being sold and has always, most places saw an increase of about 25 percent, which equaled out to about $5 per box (as compared to the prices of $3.50 and $4 seen in the years before). So, not a huge price increase, but still one worth noticing. Prior to 2017's price increase, prices had also slightly increased in 2015.

Of course, considering last year's price increase, as well as the fact Girl Scout cookie season is upon us, I can't help but wonder if prices are going to increase in 2018 as well, or if they're going to stay the same. Well, good news, guys: According to a representative for the Girl Scouts speaking with Bustle, as of right now, it doesn't look like there's going to be any kind of widespread change in pricing like there was last year. Again, it's important to remember that the price changes depending on the market, so what you pay may not be the same as what someone in a different state pays — you can find out what your market is on the official site so that you can get a better idea of the price you'll pay. But the bottom line is, prices will be the same they were in 2017.

Additionally, remember this: it's all for a good cause. According to a representative from Girl Scouts, "All of the net revenue from cookie sales — 100 percent of it — stays within a Girl Scout council’s local area to benefit girls and their council. Councils depend on cookie earnings to run their programming, which supports incredible experiences for girls, and girls decide how to invest their troop’s portion of the earnings in impactful community projects and personal enrichment opportunities." In other words: you get to eat delicious cookies while also helping to support young girls and their future. What could be better than that?

Now that Girl Scout Cookie Season has begun, we can finally start to order cookies. So, let's talk about all of the amazing cookies we can start looking forward to. There are, of course, the classics: Thin Mints, Trefoils, Samoas, Do-si-dos, all the good stuff. Girl Scouts has also confirmed that they'll be bringing back S'mores, which, honestly, is an excellent decision. The Girl Scout S'mores were introduced last year as a new cookie, and they were a huge hit (for obvious reasons).

I don't know about you, but I am more than ready for these cookies to be in in my life again.