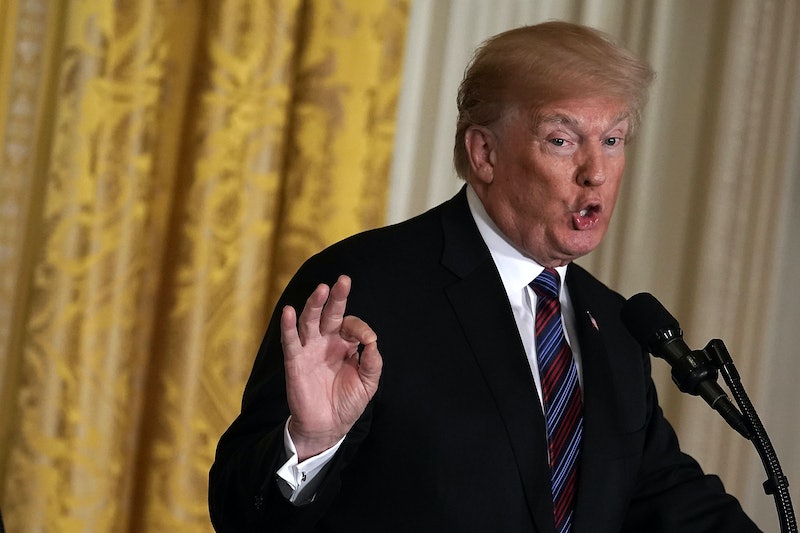 “Until we can have a wall and proper security, we’re going to be guarding our border with the military,” Trump said Tuesday when announcing the impending troop deployment. “That's a big step." The president then falsely claimed that "we really haven’t done that before."

In fact, we have have done that before. By sending the National Guard to the southern border, Trump is merely following in the footsteps of Presidents George W. Bush and Barack Obama, both of whom did the same during their respective presidencies.

Given the vagueness of Trump's plan, it's impossible to know how much it will cost. The president didn't say how many troops will be deployed, how long they'll be there for, or how much of the border they'll protect. In other words, he didn't offer up any of the crucial details that will determine how much the troop deployment actually costs.

But thanks to the Bush and Obama deployments, it's possible to get at least a rough estimate of how much Trump's plan, once it's fleshed out more, might cost.

In what he dubbed "Operation Jump Start," Bush authorized the deployment of 6,000 National Guard troops to California, Arizona, New Mexico, and Texas. They stayed there for around two years, from June 2006 to July 2008. The cost was $1.2 billion, according to congressional testimony from Major General John Nichols, who's in charge of the Texas National Guard. That comes out to roughly $100,000 per troop each year.

Obama also deployed National Guard troops to the U.S.-Mexico border. Operation Phalanx, as it was called, involved different troop numbers at different points of time: Obama initially deployed 1,200 troops when the operation was announced in July 2010, but the Department of Homeland Security reduced that number to 300 around a year and a half later. Although total estimates of the program aren't available, the first year of deployments cost $110 million, according to the Government Accountability Office. That's $91,666.66 per troop every year, just slightly less than the annual cost per troop under Bush.

Again, Trump hasn't provided details on the extent or duration of his plan to send the National Guard to the border, so it's impossible to say how much it will cost. According to the White House's press release, the guardsmen "will remain in a support role [at the border] until Congress takes the action necessary to close the loopholes undermining our border security efforts." Needless to say, there's no way to know if and when Congress will pass any type of immigration reform.

That said, the cost of National Guard deployments to the U.S.-Mexico border under Bush and Obama were more or less consistent: Around $100,000 of taxpayer money per troop annually. All other things being equal, it stands to reason that this price tag will remain the same under Trump.

Moreover, the Obama and Bush deployments are a helpful reminder that "sending troops to the southern border" isn't a single specific policy with a defined cost. The devil is in the details, and as with any policy proposal, it's important to take a look at the details before drawing any big conclusions.

Between 2008 and 2014 — the most recent year for which data is available — more Mexican citizens have have left the United States than entered it.