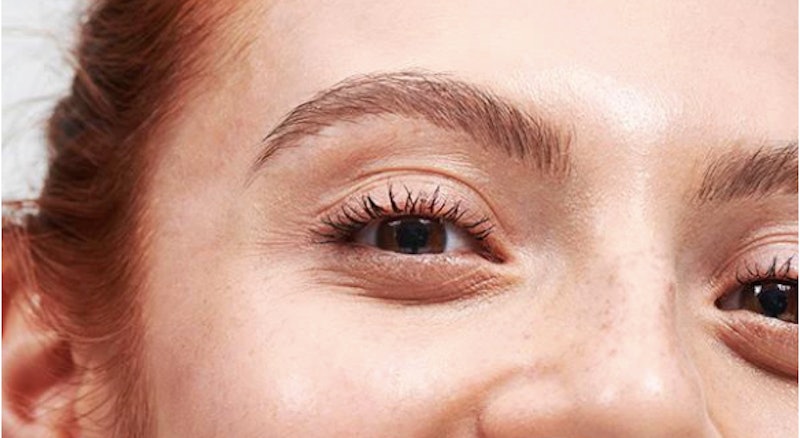 Glossier is determined to make your brows sharp this summer, thanks to the launch of its new product, Brow Flick. But how much does Glossier's Brow Flick cost? It's pretty on-par with the rest of the brand's product prices.

Brow Flick is the brand's second eyebrow product, and is meant to be used in partnership with the original Boy Brow. Brow Flick is Glossier's brand new brush-tip detailing pen, which will make filling in brows easy and stress-free.

According to Glossier's site, the pen is meant to give "more brow for your brow." The pen has a thin, brush-tip that will let you add light, feathery strokes of color to fill in your brows, giving off the appearance of natural hairs. You can use the pen to add dimension anywhere your brows feel sparse, use it to define your shape, or darken your color. You can use the product to clean up your arch shape, extend the detail, or add more thickness and drama to your brows.

This product is especially great if you were never able to hack how to fill in your arches with natural, feather-like strokes. If you have been struggling with heavy brows that are a block of color, then this pen can help you master that all-natural feathering technique.

And at just $18, it's an affordable pen to help make your makeup routine easier. Plus, you can buy a bundle deal with the Brow Flick and Boy Brow together for $30, saving you four dollars.

Once you fill in your brow with the Brow Flick, Glossier recommends finishing the look with Boy Brow to groom out your brow hairs and add extra hold. The end result will be a fluffy, polished, and natural-looking brow that's perfect for any no-makeup makeup look.

As for colors and finding a match, Brow Flick comes in three sheer shades. You can pick between Blond, Brown, and Black. You can then follow up with Boy Brow in the same color for a little more dimension and tint, or use Boy Brow's Clear version if you want to keep your arches subtle.

Since Brow Flick is a newly launched product, there aren't many reviews just yet, but some beauty vloggers have already gotten their hands on it. Sincerely, Sarah C. is one of those vloggers who have posted a swatch and first impressions video.

In the beginning of the video, Sarah discusses the holding power of the new brow product. She says that when she first received the Brow Flick pen in the mail, she immediately swatched it on the back of her hand to see how it worked. "It dried down, dried down. Your eyebrow hairs aren't going anywhere," Sarah said while rubbing the back of her hand to demonstrate how the color doesn't budge.

Since it's a micro-fine detailing pen, Sarah believes it's perfect for filling in small sections of the brow. She is not certain if it's great for creating an entire eyebrow look with just that one product.

Sarah over-plucked the tail of her brow before the video, which was perfect to demonstrate how well the pen worked. You couldn't really tell which were her real hairs and which were the pen strokes at a glance.

One interesting thing that Sarah mentions in her video is that, even though she has dark brown hair, she was sent the Blonde shade. And as you can see in the video, it's a pretty close match. So Sarah poses the question whether you're supposed to go a shade lighter than you normally would with the Brow Flick pen. Bustle reached out to Glossier, and the brand said that the labels are what they suggest.

Try out the Brow Flick pen this summer and have your easiest, most hassle-free brow yet.