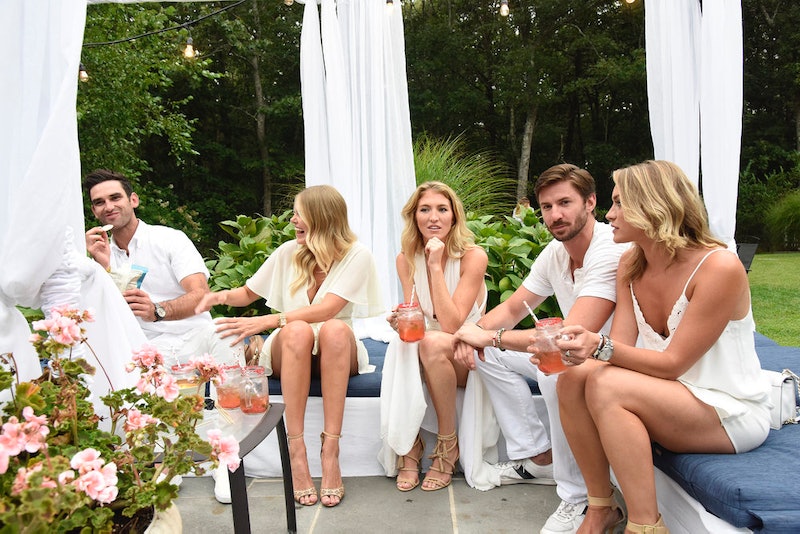 It might be icy and cold on the East Coast right now, but it's already time to start thinking about planning summer vacations if you want to travel to a location as sought-after as the Hamptons. The cast of Bravo's latest reality series is staying in a particularly beautiful mansion in East Hampton, and viewers who want to know how much it costs to rent the Summer House in Montauk will likely be disappointed. See, it's not cheap.

According to StreetEasy, a rental at 90 Napeague Harbor Road, the actual house where the series was filmed, can cost anywhere from tens to hundreds of thousands of dollars for a few weeks. You'll have to fork over a more modest $45,000 if you want to stay for the month of June, but if you're looking for a longer stay, like, say, Memorial Day through Labor Day? That's going to be an incredibly pricy $165,000. Keep in mind, many people rent houses like these primarily to use on weekends in the summer.

Apparently, that's how much New Yorkers want to get away from the scorching concrete in the summer. But how do you make the most of a vacation spent at such an expensive, yet beautiful hamlet? Well, Summer House and its cast can teach us a few things about maximizing a vacation at such an expensive location.

Even though the house is over 4,000 square feet, it's only listed as having four bedrooms. However, any smart vacationer knows that official capacity is no reason to limit yourself to three fellow guests: there are nine cast members in Summer House, so at least bring eight pals to split that cost.

While the show name-drops East Hampton hamlet Montauk as the place to be for young partiers, that's not technically the location of the Summer House, which is in a smaller neighborhood called Amagansett. And according to blog 27East, share houses aren't permitted in Montauk, so it makes sense to stay nearby without being within the limits of the more uptight rules.

If you're paying such big money for a beautiful home, be a host: have the big parties at home, where you have thousands of square feet to spread out, rather than spending more time and money on going to a club. So long as you're adept at cleaning up, of course.

If you look at the costs for a single night right now at some other Hamptons mansions, the price will still give you sticker shock. But I promise you, with summer still months away, these prices are actually not particularly bad. If you wait until the weather turns warm? Forget it, things will be sold out.

Hang With Some High Rollers

It looks like these Summer House cast members are doing pretty well for themselves... considering they all must have deep enough pockets to throw in at least a few grand for the trip. Maybe you can befriend someone like them and just be a guest at one of these homes for a weekend.

Take Advantage Of Your Location

It's the beach and you're at Summer House. Naturally, you're going to see a lot of crab boiling, swimming, tanning, and many other mostly free summer activities. For the few daytime hours you are awake, you should spend them outside. And since houses like the one featured on Summer House aren't affordable for a majority of people, consider doing these same activities during a day trip for a fun, cheap escape from the city when the weather finally warms up.