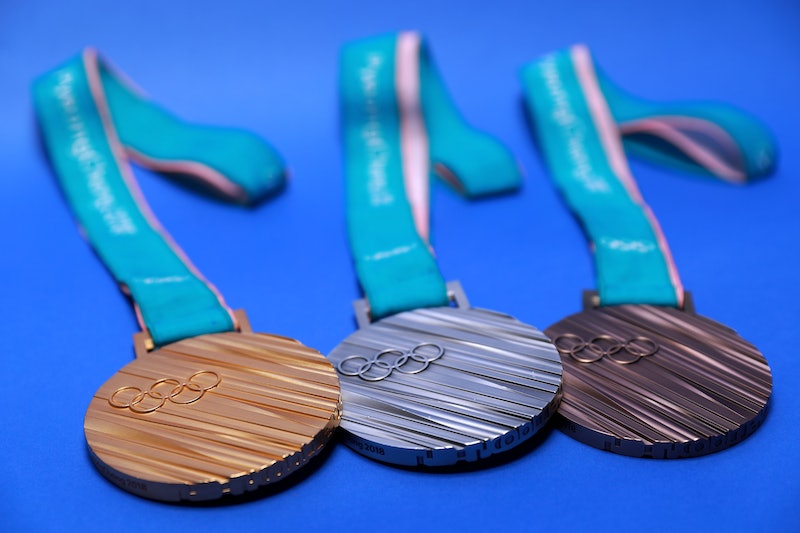 The Olympics are full of surprises, and while no one can ever be certain just who will take home the gold in each event, one thing is clear: Blood, sweat, tears, and an incomprehensible amount of practice and dedication are what propel the world's top competitors to the podium. And while not every athlete can get a gold medal, there are still two other hugely meaningful awards handed out. But honestly, how much is a bronze Olympic medal worth? Even if it's not the emotional value of winning gold, is it maybe worth as much money?

This can be a pretty complicated question, mainly because there can be multiple interpretations of the term "worth." One interpretation is how much medals are worth once they are melted down and sold. Obviously, this varies greatly depending on which type of medal you're melting. And spoiler alert: Gold medals actually aren't made entirely of gold. They are actually made up of — get ready for the bombshell — only about 1 percent actual gold. The other 92 percent of gold medals is silver, with an added sprinkle of approximately 6 percent copper. So when you melt all of those together and sell them for material costs, the total value comes out to about $644.

By contrast, bronze medals are 97 percent copper — that's where they get their shiny bronze color from — as well as 2.5 percent zinc and 0.5 percent tin. So how much do these raw materials cost? Well, get ready for this even bigger bombshell: the total cost of a melted down Olympic bronze medal comes out to less than $5.

Of course, Olympic medals are more than just chunks of raw materials. They are symbols of national pride and unity, the result of endless hours of hard work and sacrifice. That being said, a more common way of assessing the worth of medals is by estimating how much they might sell for at auction, though the value of each medal is dependent on a variety of factors.

For example, national icons who have shattered records and become national celebrities — like swimming legend Michael Phelps, who has won a total of 28 Olympic medals —sell for quite a pretty penny. For example, a medal won by Jesse Owens, the descendant of African American slaves who out-ran German athletes in front of Hitler in 1936, was purchased for $1.47 million in 2013. Medals that are not tied to a popular figure or momentous story sell for much less. Typically, a common bronze medal can bring in between $5,000 to $6,000. According to some auctioneers, that's much less than many athletes often expect.

While all Olympic medals are unique in their own right, this year's set have a special touch. They were created by designer Lee Suk-woo to resemble the texture of tress trunks as a reminder of the "work that has gone into developing Korean culture and the games themselves." According to the official Olympic website, the Korean alphabet was also integrated into the design.

[The Korean alphabet consonants] stretch across the face of the medals to the edge, where they come together to spell “Olympic Winter Games PyeongChang 2018." As a result, they create dynamic diagonal lines that reflect both the history of the Olympic Games and the determination of the competitors vying for a place on the podium.

Each Olympic medal tells a very unique story, and monetary value aside, the experience of making it to the world's stage to represent your country — regardless of whether or not you make the podium — is definitely worth more than any medal ever could be.