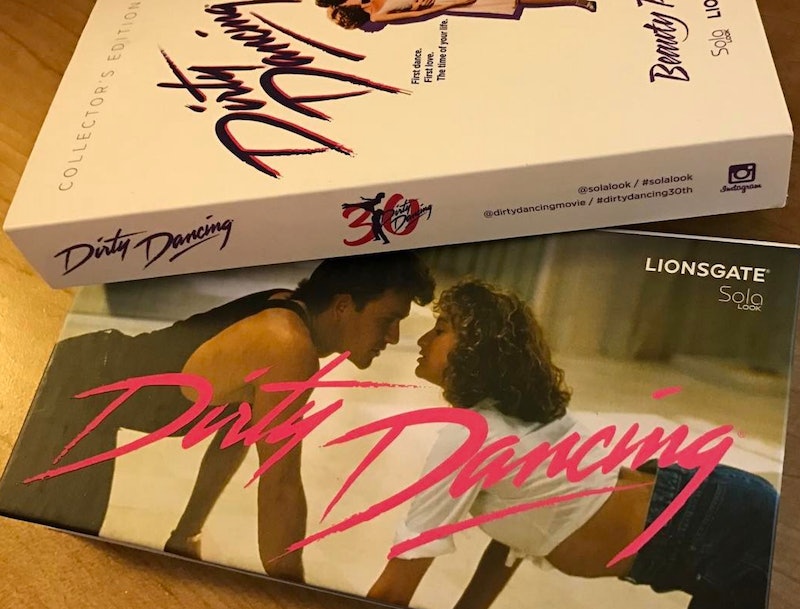 The '80s are still in vogue. The Sola Look Dirty Dancing Palette, which features eyeshadows, a highlighter, and lipstick and celebrates the film's 30th anniversary, is proof the '80s reign supreme.

According to an email Bustle received from Sola Look and according to the brand's detailed Instagram post, the official Dirty Dancing Palette release date is Saturday, Apr. 22. If you are a makeup obsessive who totally ships the film's supercouple Baby and Johnny, you can get your hands on this palette sooner than later.

There is a pre-order set for 3 p.m. ET/12 p.m. PT on Saturday, Mar. 18. A thousand palettes will be made available then. If you pre-order, your card will be charged at that time. But please be advised that your palette won't ship out until Wednesday, Apr. 12. The indie brand is also enforcing a two-palette limit per customer.

How much is the Sola Look Dirty Dancing Palette? It costs $36. Since there are six elements to the palette, each products shakes out to about $6 a piece. That's a super sweet deal.

Here's a further breakdown. There are four eyeshadows, including a matte black named "Johnny Castle" after the film's leather jacket-wearing main dude. The hot pink hue is called "I Carried A Watermelon" and references an unforgettable scene. There is a pressed highlighter, named "Merengue" after the dance, and a matte liquid lippie inspired by a dance sequence.

The products were inspired by film scenes, lines, and characters, while the palette also features original photos from the film.

The palette and the packaging are references to so many amazing scenes in the film.

There is a ton of info in this caption. Soak it all up, Dirty Dancing lovers!!

The Sola Look Flashdance Palette boasted four large pans of matte eyeshadow and it's one of my go-to travel palettes. It packs beautifully and gives me plenty of makeup options when I am away from home. I love how the brand creates palettes that take inspo from '80s dance films.

Mark your calendar for Mar. 18 for pre-order or Apr. 22 for the regular on-sale and enjoy a #ByeMoney moment.