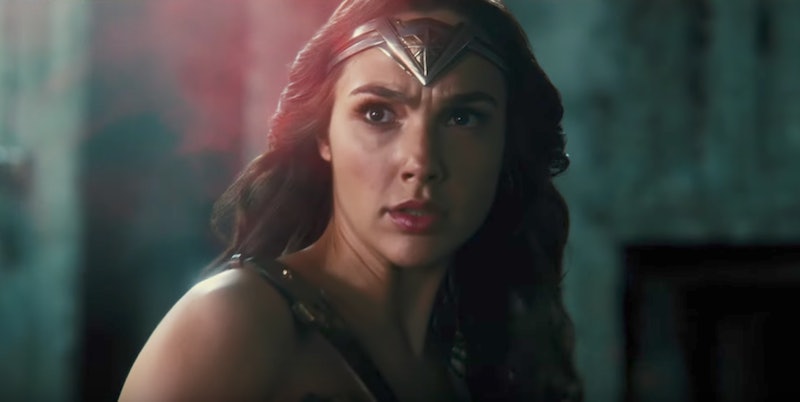 Spoilers for Justice League ahead. Justice League is the fifth installment to the DC Extended Univers), but there's really only one movie it has to live up to: Wonder Woman. This summer, Gal Gadot's solo outing as Diana Prince saved the DCEU in the eyes of many fans and critics, so it's nice to see how much Wonder Woman is in Justice League. Fans who feared that she would be reduced to a background player with the addition of three new male heroes to the DCEU (Aquaman, Cyborg, and the Flash) need not to have worried, as the character thankfully plays a huge role in Justice League. Unfortunately, she is also constantly disrespected in the film, and the stark difference in how she's treated in Wonder Woman and how she is treated in Justice League is a prime example of the toxicity of the male gaze in Hollywood.

Wonder Woman isn't just a key player in Justice League, helping recruit Cyborg and providing intel on the villainous Steppenwolf — she also emerges as the team leader. Batman may be the one who set the Justice League in motion (he's also, presumably, the one funding the entire operation), but it's Wonder Woman who has the vision and positivity to lead. She's also the one every other hero trusts immediately, unlike Batman. It's clear from their first big group meeting that the heroes' loyalties lie with her, not him. "If she kills you, we will cover for her," the Flash tells Bruce — and he's not joking.

Wonder Woman is obviously the strongest and most experienced fighter of the Justice League, which is why she more than earns her place as the Justice League leader. As such, it makes sense that she would have the biggest, most fleshed out superhero arc in the film. At the beginning of Justice League, she's still living her life in hiding. She hasn't yet become Wonder Woman the superhero, at least not as far as the world is concerned. But, with a little help from Bruce over the course of the movie, she begins to embrace her ability to inspire hope and change in the world, and she ends the film stepping into the superhero spotlight. As far as the DCEU is concerned, Wonder Woman is now the most beloved and public superhero around other than the Man of Steel.

So, yes, fans of Wonder Woman will be happy with Wonder Woman's role in Justice League — but only to a point. At the same time that Justice League elevates Wonder Woman's place in the DCEU, it also constantly disrespects her. The movie sexualizes nearly every interaction she has with men on screen, which is to say the film sexualizes every single interaction she has period, because there are no other female superheroes in the movie. Furthermore, she doesn't even exchange two words with Lois Lane (the closest Justice League has to another female lead). From her reunion with Bruce Wayne to her fights with Steppenwolf, there is not one scene involving Wonder Woman that doesn't somehow reference her looks (Aquaman calls her beautiful, for instance) or her sex appeal (she seems set up to become Batman's love interest later on).

First, Bruce Wayne acts like a little schoolboy with a crush when speaking to Alfred about calling her for help. This means that every one of their subsequent interactions is colored by the idea that Batman is trying to impress Diana or win her over, seeing her as a sex object, not a fellow hero. Then there's Wonder Woman's introductions to Aquaman and the Flash, both of whom have some sort of unnecessarily sexual interaction with her. Aquaman straight up tells her she's gorgeous and practically drools at her, while the Flash falls on top of her after pushing her out of harm's way and immediately stands up, as if afraid of his precarious position.

These scenes may seem harmless, and, to be fair, they do add a bit of lightness to the film. However, they also ensure that Wonder Woman is constantly connected to her sex appeal, even when she's fighting, in a way that none of the other superheroes ever are.

Wonder Woman isn't the only person in Justice League being objectified — this is Hollywood, folks. However there is one key difference between the objectification of, say, Aquaman and Superman in the film (both of whom have brief shirtless scenes), and that of Wonder Woman: the male gaze. The male shirtless scenes in Justice League serve the story (Aquaman lives underwater, after all), and they also aren't filmed with a lingering camera. Sure, director Zack Snyder probably recognized that some audiences wouldn't object to seeing Aquaman in all of his Aqua-glory, but neither the other characters in the film nor the camera are particularly thirsty for it. In contrast, the shots of Wonder Woman, as discussed above, show her as a figure to lust over, with the character portrayed in low-cut outfits and the camera hovering over her body.

There is no denying the difference between the way Justice League director Snyder filmed Wonder Woman and the way Wonder Woman's director Patty Jenkins did. And it's not just about the hero's seemingly shorter skirt or the laughable bikini armor worn by the Amazons in Justice League. The camera in Justice League simply objectifies Wonder Woman in a way that Wonder Woman did not. Whereas the Wonder Woman fight scenes focused on her strength and skill as a fighter, the scenes in Justice League are peppered with a handful of up-skirt shots. It's not exactly voyeuristic — all of these shots occur in chaotic battle scenes — but it does still feel unnecessary, and it certainly takes one out of the movie. Altering the length of the skirt or playing with a bit of CGI could have fixed this problem instantly. And even in non-combat scenes, Wonder Woman is dressed in especially low-cut shirts and tight pants, something that, as said, the camera never fails to emphasize.

We get it: Wonder Woman is hot. But she's also a powerful superhero who deserves not to be treated like a piece of meat by the people who are supposed to have her back when they're off saving the world. Justice League does a good job of including Diana as a character and not a love interest (yet) or team mascot, but as those up-skirt shots and scenes of swooning men show, there's still a lot of room for improvement.