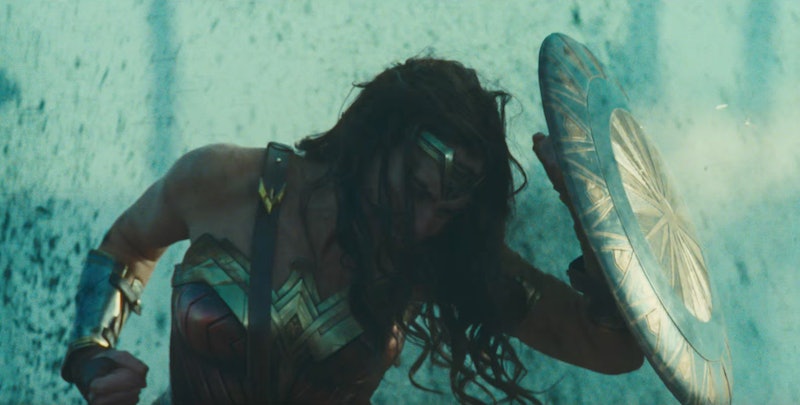 The Wonder Woman costume has been a topic of debate and controversy for decades. Ever since the character debuted in 1941, she has been held up as a symbol of feminism — but also men's sexual fantasies, due to its skimpy nature. Yet in the superhero's first movie, Wonder Woman, the iconic costume is totally reclaimed, seen as a symbol of strength, not sex, once and for all.

For some, Wonder Woman's look has always represented the strength of women, but for others, like myself, the tight dress served only as a reminder of men's unrealistic standards for women's looks. I used to look at Wonder Woman's outfit and see a symbol of female oppression, not to mention unsuitable for fighting. Wearing a tube top, for instance, is a constant battle to discreetly yank up the sides or straighten out the neckline without flashing anyone. And Wonder Woman is supposed to fight crime in that? No way. The hero's costume was just that — a costume. It wasn't something that helped her fight bad guys, but rather something that made her appear feminine and appealing to male viewers.

Now, though, thanks to Wonder Woman, I see that outfit as a uniform of strength and power. In the new film, Wonder Woman's iconic costume feels more like armor. The impractical tube top, traditionally miraculously held up by Diana's ample cleavage, is moulded and thick to protect her chest from any bullets that might fly her way. The (very, very) short skirt isn't there to show off her legs, but to help give the hero mobility. Her thigh-high boots aren't meant to titillate men, but to protect her shins and knees. In fact, the design of the costume was even tweaked a bit from Wonder Woman's big screen debut just a few years back. "The first time I tried the costume was for Batman v Superman and it was tight and it was different," Gal Gadot said in an interview, via ABC News. This time around, the costume was made more comfortable to accommodate the multiple action sequences, and its look is empowering, not demeaning.

But it's not just the design of the costume that's different in Wonder Woman — it's the way the costume is shown. The movie is full of slow motion shots, but not one of them is focused on the exaggerated sway of its hero's hips as she walks into battle. There are no lingering camera movements or unnecessary close-ups of Wonder Woman's breasts or legs. There is no sexy changing scene, no reaction shots of men appreciating Diana's figure, no close-ups of her ass. In other words, Wonder Woman is free from all the objectifying shots of women commonly seen in action films, like those of Harley Quinn in Suicide Squad, for instance.

I have no doubt that the lack of objectification of Wonder Woman's revealing suit is due to it having a female director and many women its cast and crew, as in the new film, neither Wonder Woman nor her costume are subjected to the male gaze. The absence of this allows for Wonder Woman's power to shine through, which is what makes her sexy — not her skimpy clothes. Her outfit may be short, but it's practical, and it makes her seem completely in charge of her sexuality and strength.

Thanks to the new film, I can look at Wonder Woman's costume and see power where I once saw oppression, and for that I am grateful.