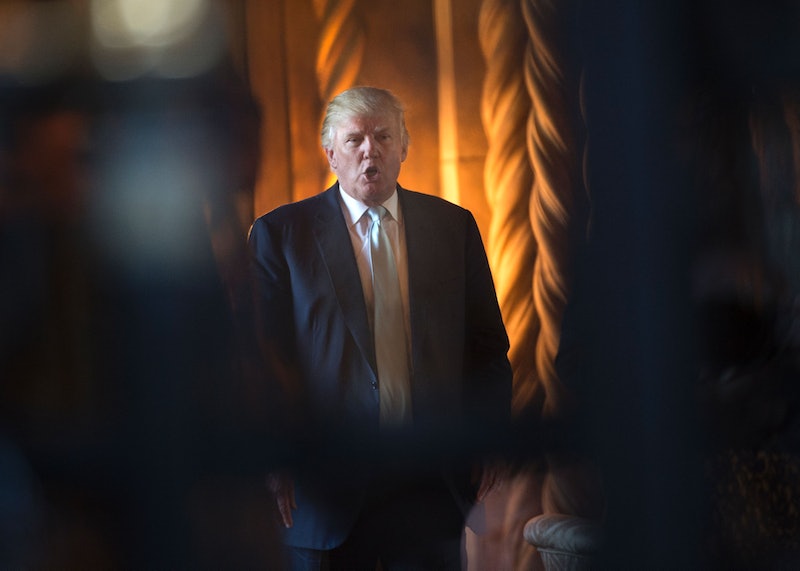 It should be no surprise that presidential inaugurations are expensive affairs. Since they include a massive parade, a star-studded concert, and not just one but multiple lavish balls, the price tags can quickly add up. The inauguration of President-elect Donald Trump on Jan. 20 is expected to be no exception. But how much money has the Presidential Inauguration Committee raised for Trump's big day?

The truth is, it's hard to say exactly how much money has been raised by Trump's Presidential Inauguration Committee as the committee has yet to release any specific numbers. However, a report from the New York Times in early December claimed the president-elect's fundraising team had managed to pull in about $50 million from donations. While that number reportedly puts the committee on target of meeting its $65 million to $75 million fundraising goal, it's merely a drop in the bucket compared to an inauguration's overall price tag.

According to the Washington Post, the total cost for all of Trump's inauguration events are expected to fall somewhere between an estimated $175 million and $200 million. That includes the price of official dinners, a parade, a concert, multiple inaugural balls, a swearing-in ceremony at the U.S. Capitol building, and police and security to oversee the whole shebang. Although Trump's the man of the hour, the president-elect isn't expected to pay for everything himself.

A breakdown of inauguration costs by the Post, shows Trump's Presidential Inaugural Committee (like all presidential inaugural committees before it) will foot the bill for everything but the swearing-in ceremony at the Capitol, which is paid for by the federal government. In essence, Trump pays for the parties and celebratory events while the government, and in some cases, taxpayers cover all of the costs associated with the official swearing-in. On the tab picked up by the government is the construction of a stage on the Capitol's West front, security and emergency personnel to oversee the event, and an official congressional luncheon attended by the new president and vice president.

If Trump's Presidential Inaugural Committee does meet its goal of raising between $65 million and $75 million they'll have surpassed the fundraising record President Barack Obama's inaugural committee set in 2009. Despite capping contributions from individuals at $50,000 and banning donations from corporations, lobbyists and political action committees (PACs), Obama raised a record-breaking $53 million for his first inauguration. Trump's inaugural committee has opted to ban donations from lobbyists but to accept large contributions from corporations and individuals, according to the Times.

Those who donated at least $1 million to Trump's Presidential Inaugural Committee were reportedly rewarded with an intimate dinner with Vice President-elect Mike Pence, the opportunity to lunch with the ladies of the first families, and a candlelit dinner featuring both Trump and Pence among other things, according to a memo obtained by the Times. The tiered benefits extended to major donors has raised concerns that Trump's Presidential Inaugural Committee potentially opened the door for wealthy individuals and corporations to buy influence within the incoming administration.

While Trump's Presidential Inaugural Committee will cover a portion of the inauguration hefty price tag, Trump himself is not expected to open his own wallet to cover any of the costs, according to the Times. In fact, taxpayers will still be forced to pay a significant – if not major – part of the costs associated with the inauguration.