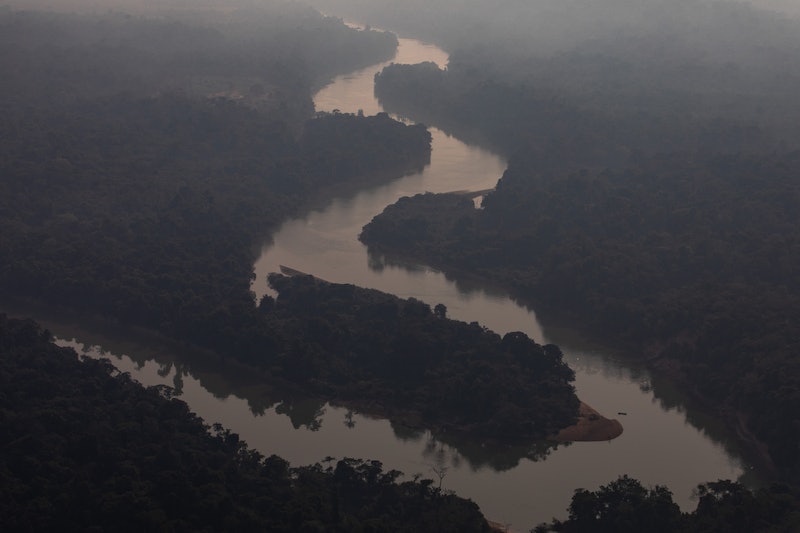 In recent weeks, there has been intense international outcry in response to the devastating fires burning through the Amazon rainforest. And in the midst of this environmental crisis, one false statistic has been floating around: that the Amazon rainforest produces 20% of the world's oxygen. Although there are many dire consequences related to the burning of the Amazon, losing that much of Earth's oxygen supply is not one of them.

You may have heard people repeat this misunderstanding over the past few days. In fact, even French President Emmanuel Macron cited it in a tweet. He wrote in part, "Our house is burning. Literally. The Amazon rain forest - the lungs which produces 20% of our planet’s oxygen - is on fire. It is an international crisis."

In truth, the Amazon rainforest accounts for a fraction of oxygen production in the world. According to The Atlantic, it produces approximately 6% of the oxygen that's created by the photosynthetic organisms living on Earth right now.

But here's the catch: most of the oxygen available in the world does not come from photosynthetic organisms like trees. According to Scientific American, the majority of the oxygen on Earth actually comes from the oceans; specifically, from tiny plant matter called phytoplankton that live at the bottom of the ocean.

This is not to say that the burning of the Amazon doesn't impact the Earth. It does, in massive and devastating ways — but the more that people actually understand the true impact, the better, and that means moving away from false statistics. To learn more about how oxygen is created on Earth, and how humans do and don't impact the oxygen supply on Earth, you can check out these pieces by The Atlantic and Scientific American.

The true consequences of the Amazon burning, though not related directly to oxygen loss, are still extremely significant. According to Vox, one major consequence of these fires could be a disruption of rainfall patterns across the globe; trees play a large role in rainfall patterns, the publication reports, because they absorb water and send it back up into the sky through a process called evapotranspiration.

To put it into further perspective, a report by George Mason University and the National Institute of Science and Technology for Brazil revealed that the Amazon generates approximately half of its own rainfall. So when a forest as large as the Amazon burns, it could dramatically impact the rainfall patterns in the area, leading to agricultural and cultural devastation.

What's more, if enough of the rainforest is destroyed, then the area will change entirely in terms of climate and become a savanna, according to The New York Times. This will also impact weather patterns, not to mention the amount of carbon in the Earth's atmosphere, the publication explains, since there will be no trees to take in the carbon.

As CNN noted, the number of fires this year in Brazil is up 85% compared to last year. To learn more about how to help end this crisis in the Amazon, you can read this piece about where to donate.

More like this
The Best Fans That Blow Cold Air
By Andrea Hannah
The 6 Best UV Umbrellas, According To A Dermatologist
By Rachael Green
The 8 Best Indoor Door Mats For Your Home
By Jenny White
Your Daily Horoscope For August 9, 2022
By Mecca Woods
Get Even More From Bustle — Sign Up For The Newsletter