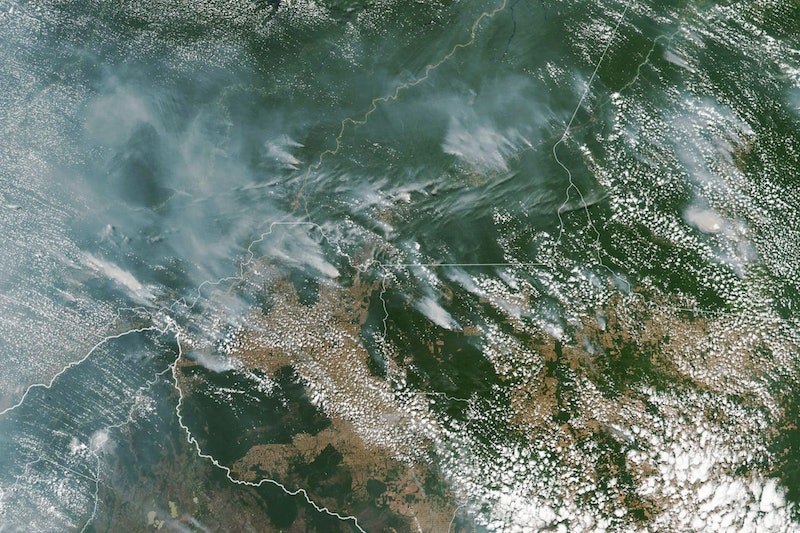 Recent news stories about the devastation happening as a result of forest fires in Brazil's Amazon rainforest are truly heartbreaking, but, if you're feeling hopeless, there are things you can do from where you're sitting right now. Below is an explainer on how to donate to Amazon rainforest causes, because it's too distressing to sit back and watch one of the world's most beautiful ecosystems be destroyed.

According to the BBC, between Thursday 15 and Wednesday 21 August 2019, more than 9,500 fires were observed in Brazil's Amazon rainforest. And the National Institute for Space Research (INPE) has said that, since January 2019, it has detected more than 74,000 fires in this area. That's the highest number since records began in 2013, the BBC reports, and a surge of 84% compared to this time last year.

Conservationists have criticised President Jair Bolsonaro of Brazil for stifling efforts to save the Amazon Rainforest. He took office in January with promises of developing the region for farming and mining in spite of critics' warnings about deforestation, and in that time, Brazil has reported a record number of forest fires, according to Reuters. Bolsonaro hasn't accepted them blame, telling told reporters that it's the 'queimada,' the time of year when farmers burn to clear the land.

"I used to be called Captain Chainsaw," he said (via Reuters). "Now I am Nero, setting the Amazon aflame. But it is the season of the queimada."

While the cause of the fires may be disputed, the devastating effects are plain to see. So what can we do about them?

By donating to campaigns and charities, you’ll help fund relief and conservation efforts to protect the rainforest. Rainforest Foundation UK works to fight against deforestation locally and globally. Similarly, Cool Earth works to prevent deforestation by working with the communities that rely on the rainforest to survive. The Rainforest Trust works globally to protect vulnerable areas, and 100% of your donations will go to conservation work. All of these charities accept donations through their websites and there are so many others doing such amazing work, including:

Along with donating money, there's other ways you can help. For example, Gabriel Santos, a lawyer in the Amazon's Rio Branco, is gathering signatures on his Change.org petition, which is asking "all levels of Government in Brazil to mobilise and help us put an end to the burning of the Amazon rainforest!" It's also asking "the authorities to set up an inquiry to investigate what is leading to the increase in fires in this region and hold the culprits to account." As of writing, the number of signatures stands at 543,293, and Santos is trying to reach 1 million.

It's important to stay up-to-date with the news of what's happening with the fires in order to help in other ways. #PrayforAmazonia and #AmazonRainforest are both trending right now, so it’s super easy to get clued up and join conversations about how else you can help conservation efforts.

If you want to do your bit to donate to Amazon rainforest causes, it’s incredibly easy to give money to the above charities through their online donation pages or to sign your name on an online petition. To see one of the world's most beautiful and important regions destroyed is seriously distressing, but you don’t have to feel helpless.