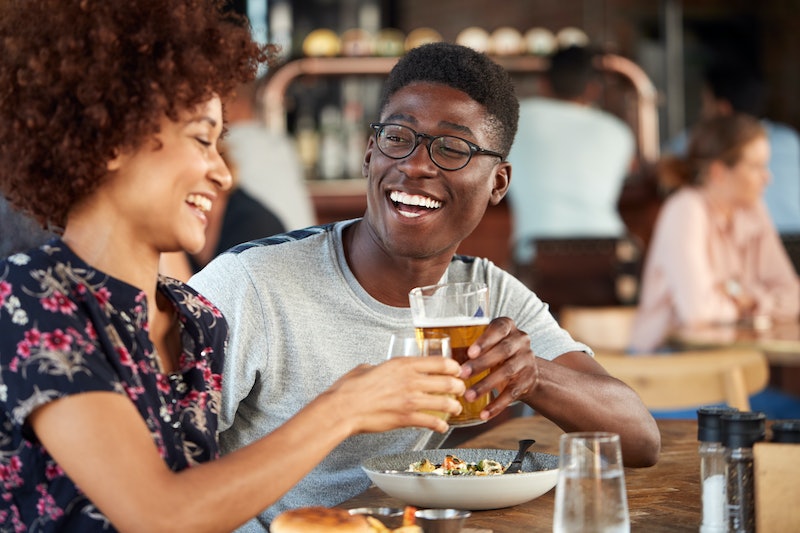 It's Shakespeare who said “the course of true love never did run smooth” and it makes you question whether he saw dating apps coming. Sometimes trying to find the one can feel like a full time job in itself. Between scoping out the time in your busy schedule to preparing yourself before the first meeting, it's a lot. And that's before we even talk about money. But how much should you spend on a first date? New research has found that UK singles spend over £100 per date. Wow.

Dating app Plenty of Fish surveyed 2000 singles in the UK to establish how much they spent on a date. Prepare yourself, these figures will have you shook. Brits spend an average of £106.06 per date, meaning UK singles can expect to part ways with £1,349 on romance in a year. Over the course of a lifetime, the app predicts this will cost the average dater £40,470. That’s a big investment into your love life and, I’ve got to say, it makes me feel slightly unwell.

While you might think it’s expensive dinners, gig tickets, and trips to the theatre that end up pushing the price of dating up, the research found that date preparation was generally more expensive than the dates themselves. On average, women spend £53.14 before a date compared to £74.07 spent by men. Of the men surveyed, 90% said their main expense before a date was tickets for an activity or event. The next splash out was on a new shirt or top (84%) and then some new trousers (80%). When it came to getting ready for the big night, 85% of women said their most expensive consideration was new perfume. While 81% said they also liked to treat themselves to a new top and 79% liked to top it off with new trousers.

There's definitely something to be said for making the best impression possible but does it have to be so expensive? Shannon Smith, Plenty of Fish’s resident dating and relationship expert, said “purchasing tickets for events or activities is a big trend, not to mention that both ladies and gents like to turn up to a date feeling confident and looking their best. However, once on the date, a modest meal out or trip to the pub doesn’t have to cost the earth.”

Once on the date, Plenty of Fish found that men spend an average of £62.59 compared to women who splash out £36.60. While 71% of female respondents said they usually offer to go halves on the bill and many said they would be happy for their date to spend around £38, instead of £62, 19% of men said they didn’t think their significant other would enjoy a cheap date.

So, how much should you be spending on a first date? Relationship expert Rachael Lloyd from eharmony says, “dating can be expensive. The endless dinners and drinks can quickly add up and cause singles even more stress!” She continues:

“If you connect with the person you're on a date with on a more granular level, with shared personality traits and passion points then it won't matter whether you're eating in the most expensive restaurant or walking around your local park."

Going on fancy dates can be fun from time to time. Everyone likes getting dressed up, eating nice food, and doing different activities. However, it isn’t the be all and end all of dating. The main reason you’re there is to see if you have that spark with someone. Within the Plenty of Fish survey, 85% of respondents agreed that chemistry and conversation is so much more important than the cost of a date and 46% said that cheap or free dates are often the best ones.

So, next time you’re delving into your bank account to create the perfect date maybe think outside the box. You can’t beat a lazy day under the sun in the park with the right person, IMO.