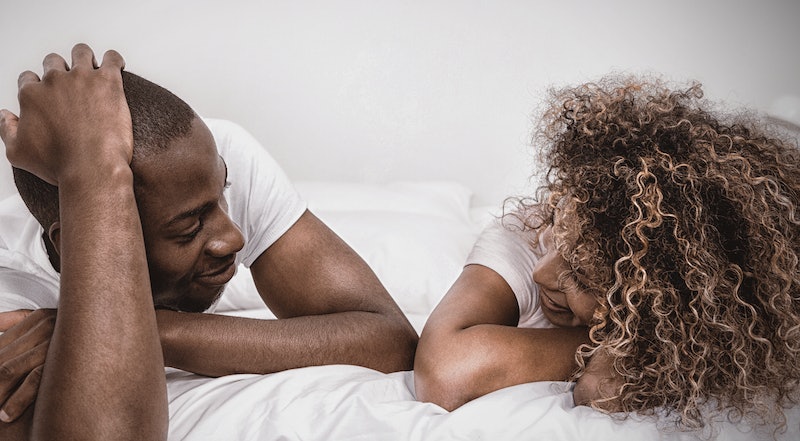 Sex is incredibly intimate and should be good fun. However, it can also be a pretty touchy subject. Everyone deserves to get the most out of their sex life and, while getting intimate isn’t all about climaxing, it does play a pretty essential role. If you’re not finishing with your partner on a fairly regular basis, it might be worth raising it. And there are ways to do so without it ending in an argument. Here’s how to speak to your partner about changing your sex life, according to an expert. It can be difficult to express your needs when you’re worried that you’re going to upset someone but it takes two to tango and your pleasure is just as important as your partners. Experts suggest through speaking about it your sex life could come on leaps and bounds.

A recent survey released by Superdrug Online Doctor revealed that, typically, women want 40% more sex than what they're already having. Of the 1,000 people Superdrug spoke to, they found that, on average, people are having sex eight times a month and women would rather it be raised to 12. But it wasn’t just the amount of action they were having that women weren’t completely satisfied with. They said that, when they had sex, they’d ideally like it to last 19.3 minutes from foreplay to climax, yet they said their partner typically lasts 9.9 minutes.

Talking to your partner about changing up your sex life without sounding like your playing the blame game can be hard. “It can sometimes feel awkward having conversations about sex as you may worry about hurting your partner’s feelings or get embarrassed but it’s really important, particularly if things aren’t going as well as they could be," says Martin Burrow a counsellor at UK's largest provider of relationship support, Relate. He continued:

"By talking openly and honestly about what you’re both enjoying, what isn’t working and any new things you’d like to try, you’re creating an opportunity to improve your sex life and your relationship as a whole."

Looking in the specific, the study found that the missionary position was ranked as the most ideal position for climaxing by 48% of the female respondents. Doggy style was voted the best by 16.2% and, down at the bottom was the standing position, which gained just 3.7% of the vote.

So, if you’ve got a good idea of what you’re into and what is likely to prevent you from climaxing, but you’re not sure how to let your partner know, Burrow has some tips. Firstly, he says the key to getting things going is simply saying you need to talk, choosing a time when you’re both going to be in a good headspace, in a place that’s private and neutral.

“Walking is great as it can feel easier to open up when you aren’t sitting face to face,” says Burrow, “be sure to point out that this isn’t a criticism of them or of your sex life but you’re wondering if there are some things you might both be able to do to improve it. Your intention is important. Ask them if there’s anything you could do that they would enjoy so this isn’t just about your own needs.”

If being so direct is a little bit intimidating, Burrow offers these tips to try and ease the conversation and keep it from getting heated:

Sadly, there's no cheat sheet when it comes to having the best sex of your life. Often it’s something you’ll work on with your partner. Just like you change your taste in clothes and music, your sexual desires can change over time too. Keeping communication open is a super healthy and positive way to ensure you’re both happy.

More like this
TikTok's "Triangle Method" Technique Is The Key To Better Flirting
By Carolyn Steber
My Partner Wants Me To Wear A Diaper During Sex. Help!
By Sophia Benoit
30 Sweet Valentine's Day Caption Ideas For Long-Distance Relationships
By Syeda Khaula Saad and Carolyn Steber
Why Being “Too Sensitive” In Relationships Is A Good Thing
By Lexi Inks
Get The Very Best Of Bustle/UK
Sign up for Bustle UK's twice-weekly newsletter, featuring the latest must-watch TV, moving personal stories, and expert advice on the hottest viral buys.