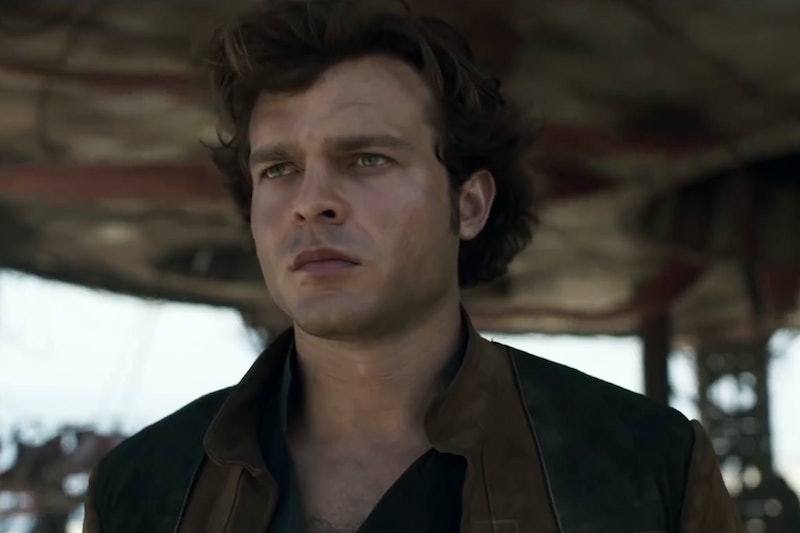 A long time ago in a galaxy far, far away... no, longer than that. We're talking not about a Star Wars classic but the latest film in the Empire, Solo: A Star Wars Story. It's a tale that promises to fill in fans on the early years of everyone's favorite vest-wearing sarcastic smuggler, Han Solo. But exactly how much time is there between Solo and A New Hope, the first film in the original trilogy where audiences were initially introduced to Han? And how much will that timing affect the Star Wars stories to come?

To figure out the number of years between the two films, the best place to start is with the guy at the center of both. Han Solo, smuggler-turned-rebel fighter, was played by a 33-year-old Harrison Ford in A New Hope. But actors play above and below their age all the time, so that only gives a general range. Fortunately Star Wars fans are nothing if not thorough; the universe has its own detailed timeline hinging on the Battle Of Yavin, the major fight that ultimately led to the destruction of the Death Star in A New Hope. According to Lucasfilm, Han's birth year is 29 BBY (Before Battle of Yavin), meaning he's a solid 29 in A New Hope.

Ok — now to figure out how old Han is in Solo. In an Entertainment Weekly interview with Lucasfilm president Kathleen Kennedy, she said the filmmakers weren't going to go the same route as with Phantom Menace's kiddie Vader. “He'll definitely be probably in the high teens, low 20s. We’re not introducing you to a 10-year-old Han Solo," said Kennedy. So let's split the difference and round it off to 20 years old. That means a decade passes between the events of Solo: A Star Wars Story and Han's run-in with Obi Wan at Mos Eisley Cantina.

A lot can happen in 10 years, and from what we've seen in the Solo trailer, Han's boasting and bravado have been there since day one. What's missing is more of his sarcasm and mercenary attitude. This guy seems too naïve and idealistic to be the kind of person who'd tell Leia, "Look, I ain't in this for your revolution, and I'm not in it for you, princess. I expect to be well paid. I'm in it for the money.” So what happens between now and then to change things?

For one thing, probably a first betrayal. Han's experienced plenty of it in the years we've seen him already, from former friend Lando Calrissian handing him over to the Empire at Cloud City, to his own son turning on him in The Force Awakens. But Solo's trailer explicitly includes Woody Harrelson's smuggler warning a younger Han, "Assume everyone will betray you, and you will never be disappointed."

Whether that refers to Han's childhood friend Qi'ra remains to be seen, though Harrelson's own character isn't out of the running. As the actor told ComicBook about his character's relationship with Han, “I don’t know if mentor is really the right word, you know. I’m a criminal who he gets to know, and I guess, probably, I do have some influence on him. But I’m a criminal.” There's also always the possibility Lando did Han dirty even earlier than fans thought, but considering Han trusts him enough to try and hide from the Empire in his city, whatever bad blood might've been between them wasn't enough that Han truly distrusted him.

One character's definitely out of the question when it comes to betrayal, though. Co-pilot, partner-in-crime, and a character who looks amazing for his 190 years, Chewbacca's the one friend that Han's definitely stuck with during the decade between Solo and A New Hope. At Han's side as they get sucked into the Rebel Alliance's struggle, Chewie's a constant pal that Han was, luckily, able to count on through all those intervening years.

More like this
What's New On Netflix: A Third '365 Days' Movie & Lili Reinhart’s New Film
By Arya Roshanian
Twitter Is At Odds Over Taylor Swift’s Possible ‘All Too Well’ Oscar Run
By Brad Witter
Revisit 1992’s 'A League Of Their Own Cast' Photos After The New TV Series
By Grace Wehniainen
Ezra Miller Apologises To Everyone "Alarmed & Upset" By Their Behaviour
By Sophie McEvoy
Get Even More From Bustle — Sign Up For The Newsletter