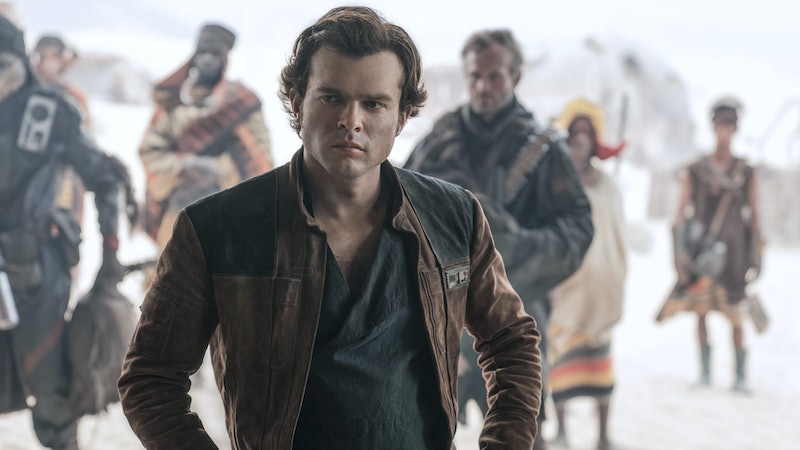 Fans have been eagerly awaiting any drop of information about upcoming Han Solo standalone movie, Solo: A Star Wars Story. But with the official announcement of the song listings, the Solo soundtrack actually reveals more about the movie than even the trailer does.

The movie's trailer dropped in early April 2018, treating fans to what looked like a multi-planet heist with Solo joining up with a rag-tag crew of smugglers (with some familiar faces among them). The centerpiece of the action seemed to take place on a two-tiered train known as the Conveyex, and implied the heart of the film would be a great train robbery on an icy planet now identified as Vandor.

But with the official soundtrack listing dropping on film composer John Powell's personal Instagram, it looks like fans of the Star Wars franchise have been teased and fooled yet again. There's definitely a train robbery, and it's still going to be a high-octane action sequence, but out of the 20 tracks, the one with the extremely on-the-nose name of "Train Heist" comes in at a mere number 6. That's well within the first third of the movie, and unlikely to be the apex of the film's action.

Meanwhile, some very intriguing titles pop up in place of pride two-thirds of the way down the list: Track 17's "Savareen Standoff", and Track 19's "Testing Allegiance." Savareen is an outer-rim planet in the Star Wars universe, and likely to be a full-on showdown between major characters in the film, with a possible surprise betrayal or rescue hinted at with Track 18's "Good Thing You Were Listening," though it's unclear whose allegiance will be tested and over what. Given that the last track is called "Dice And Roll", it could reference the famous gold dice Han rolled to officially claim the Millennium Falcon once and for all. Were that the case, it might be that Lando Calrissian (played by Donald Glover) swoops in to save the day, only for he and Solo to have a falling out of some sort, possibly over Calrissian losing his prized ship for good.

Tracks 9 through 11 ("Is This Seat Taken?" "L-3 & Millenium Falcon" and "Lando's Closet") confirm Solo and Calrissian meet up, with the Falcon playing a major role. Combined with the trailer, fan theory has it that new character Qi'Ra (played by Emilia Clarke) sends Solo over to meet up with the charming scoundrel to see if they can use his notoriously fast ship for a particular job, likely the one referenced in the immediately following Track 12, "Mine Mission."

What's interesting is none of the songs overtly name the person Qi'Ra's taking orders from — mention is made of a "big-shot gangster putting together a crew", and in early May, fans got to hear the man speak for himself. Paul Bettany plays Dryden Vos, and in this TV spot specifically says "we need an incredibly fast ship, and a brilliant pilot." The track titles only mention a handful of characters fans were expecting to show up, including Han, Chewie, Lando, and Lando's robot sidekick L-3. The vagueness of the titles could be Lucasfilm's attempt to make up for past soundtrack listing accidental reveals, like Phantom Menace's "The High Council Meeting and Qui-Gon's Funeral" or even the original Star Wars' "Ben's Death and TIE Fighter Attack." Not exactly subtle, there.

Still, the Solo tracks promise a movie packed full of heists, missions, and action-packed set pieces, with a little mystery thrown in ("The Good Guy" of Track 14 is probably Han, but who's to say for sure?). Whatever the track titles ultimately refer to, it looks like Solo: A Star Wars Story is underscoring one big adventure for the Star Wars smuggler.