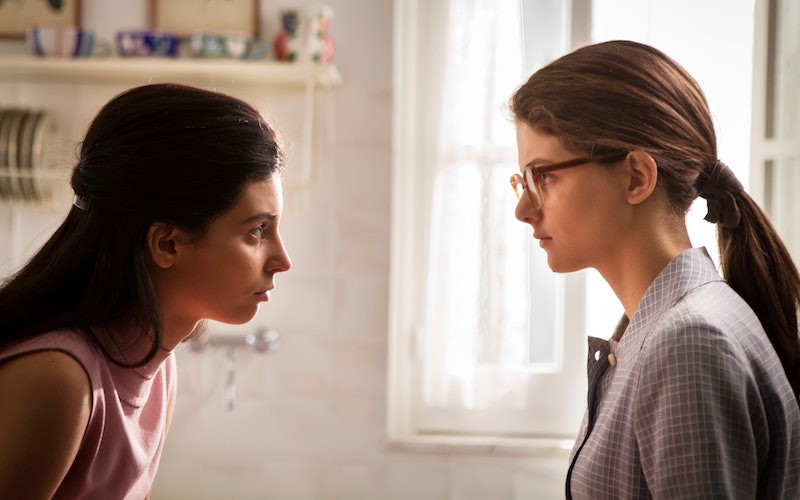 The two protagonists in Elena Ferrante's Neapolitan Novels, Lila and Elena, are simultaneously at odds with each other and attached at the hip. It's a complicated dynamic that "we all have in our lives, at least once," My Brilliant Friend director Saviero Costanzo tells Bustle. While the audience may not be familiar with life in '60s Naples, Ferrante's focus on female friendship has made her book series, which is now in its second season as an HBO show, that much more universal.

"Ferrante built a kind of archetype where everyone can see themselves," Costanzo says, explaining that despite his difference in circumstances, he still related to the book's two young, female, Neapolitan protagonists. "I [jumped] into these two characters, living like I was them!" he exclaims. "And it was incredible!"

It was the specific nature of their relationship that drew him to the tale, including the tension between the friends. "We always meet someone who's trying to make us a better person. And to do that, sometimes the envy, the competition has to be part of it," he says. Indeed, while Elena and Lila's relationship may not always be pleasant (the two young women become more combative as they find themselves embroiled in a love triangle), their competitive dynamic pushes each other to make something of their lives.

Ferrante's second book, The Story of a New Name, opens with Elena dumping Lila's beloved notebooks into the river. She is furious with her best friend for stealing her beloved Nino Sarratore and retaliates by destroying Lila's greatest achievements. Season 2, conversely, picks up right after her wedding to Stefano Carracci. This narrative tweak was the biggest change between the source material and HBO's adaption, Costanzo says, which keeps the plot more linear. Despite these small edits, however, Constanzo hopes "that the heart, the soul of the book is still there."

Ferrante, who is famously secretive and shies away from public attention, was just as involved with Season 2 as she was the first time around. "Ferrante has been always very gentle and polite with me," he shares. "She was very open to the adaptation.... And she [never tried] to keep the possession of her story." The Italian author submitted her notes over email, according to the director, and even helped edit the script — a process which he calls "a lovely and productive collaboration."

One of the most important aspect of the Neapolitan Novels is Elena's interior monologue, which the HBO series accomplishes through voiceover. A notable example of the protagonist's rich inner life occurs in Episode 2, when Lenu contemplates the sacrificial role of motherhood and Lila's reluctance to become pregnant.

"[Lila] didn't want to become like our mothers, neighbors and relatives, who looked like they'd lost their female features," Elena reflects as she studies her neighbors. "They had been eaten away by the bodies of husbands, fathers, and brothers, whom they ended up resembling." It's a beautiful moment of empathy — especially given that earlier in the episode, she had tried convincing Lila to give in to her husband's violent demands.

Although Costanzo had never used voiceover before in his films, he says it came easily, since Ferrante's monologues felt like a "conscious river that comes out of [the author's] soul." The end result, then, gives "the readers, now viewers, the idea that they are watching something that is [being] written while [they] are watching it." Nothing feels pre-meditated or overly polished — both the dialogue and narration feel organic and, by extension, relatable.

"The miracle of Ferrante writing this long, long book is to create something that everybody can identify with," Constanzo says. Indeed, just as Ferrante's prose retained its potency after the Neapolitan Novels were translated into English, HBO's adaptation remains just as true to her seminal source material and the complicated friendship that surrounds it.