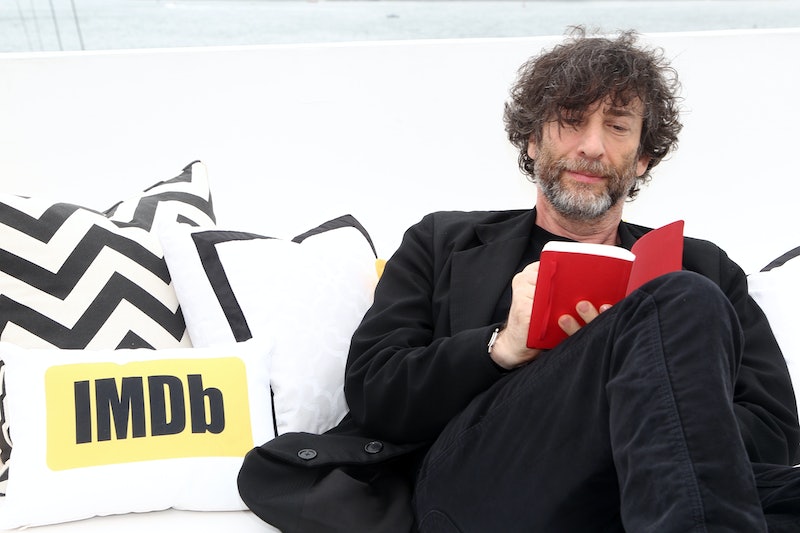 Winter isn't finished quite yet, and as people across the country prepare for more weeks of driving snows, howling winds, and apocalyptic conditions both natural and political, the old gods of the far North are making their presences felt once again. Specifically, they can be found in Norse Mythology, Neil Gaiman's dazzling retelling of viking myths, which is now available in paperback with a gorgeous new cover to boot.

With Norse Mythology, Gaiman brings us a contemporary spin on the ancient sagas of Odin, Thor, and Loki. Rather than a loose collection of old stories, the book reads like a modern fantasy novel. There is wicked wit, family drama, and a relentless momentum towards Ragnarok, the final destiny of the gods. The tales take place in a time before time, when disgruntled frost giants roamed the Earth, or they are set in the hazy future, when all nine realms shall be consumed with fire and ice. And yet Norse Mythology still feels strangely, terrifyingly now.

"I remember a reading, a year ago, when the book came out in hardback," Neil Gaiman tells Bustle over toast (he had to order a second round of toast, he explained, for fear that people in the restaurant would wonder why he was still sitting there). He was reading to a packed crowd, while a thematically appropriate blizzard raged outside. "I get to the bit where Odin announces that the way to keep the frost giants out is to build a wall," says Gaiman, "And I had the room break down."

"I’m just standing there while people are having hysterics of some kind, they’re laughing, and there’s this sort of weird, stretched tight, ‘oh my god’ relief laughter, that just goes on and goes on," he says. "And I don’t think that that would have occurred at any other point in history."

Clearly, the Norse gods' defense plan (which naturally gets them into a heap of trouble) reminded everyone of that "puffed up little popinjay and his appalling wall," Gaiman says. "So I think from that point of view, that’s very time specific."

Still, though, Gaiman believes that these stories would feel relevant in any time. "They are timeless," he says, "They feel mythic. Often there’s a simplicity to the myth, you don’t have complicated things, you don’t have twits in plots, you just have ‘this is what happened.’ And sometimes you have stories that are contradictory."

Somehow, Gaiman has managed to weave a single, driving narrative out of these contradictory stories. "I had an idea in my head of how it was all going to work, but it wasn’t until it was done that I actually put every story into order and read them through," he says. He wanted to "put them into a sequence that tried to make sense of things like, ‘here is the fall of Loki,’ ‘here is the build up to Ragnarok.’"

He started with the stories he had loved as a child, like the time that Thor dressed up as the goddess Freya to get his hammer back, or when Thor and Loki traveled to the land of the giants to engage in various competitions (including a battle with a giant cat). For the most part, he stuck with the stories as told by Snorri Sturluson, the Icelandic historian who gathered most of the Norse myths that exist today into a collection called the Prose Edda.

Even with Snorri's steady guidance, though, there were decisions to make. "I made judgment calls as I went," says Gaiman. "The story of how Freya obtained her necklace is a kind of a late story, it’s after Snorri... basically, she has sex with a load of dwarves, and gets them to make it for her. And it’s a story that I didn’t think that I could do without." But the way the story treated the goddess Freya just didn't sit well with him. "There’s a sort of weird implicit slut shaming that goes on," says Gaiman. "It’s kind of misogynist, and it’s not from Snorri, so I’m leaving it out."

That wasn't the only story he abandoned on feminist grounds, either. "There are two accounts of the wedding of Gerd and Frey. And in each of them, Frey falls in love with this giantess that he’s seen but doesn’t dare talk to," says Gaiman. "In one version, his assistant goes and says to her, ‘Frey is love with you,’ and she goes, ‘Fair enough, I will marry him, when are we going to meet?’ And in another version, she goes, ‘I don’t think so.’ And he says, ‘If you don’t do it, these are the terrible things that we’re going to do to you, and here is how I’m going to make your life miserable.’ And she goes, ‘Oh that’s pretty horrible, OK.’"

"There’s a sort of weird implicit slut shaming that goes on," says Gaiman. "It’s kind of misogynist, and it’s not from Snorri, so I’m leaving it out."

The choice seemed fairly clear to Gaiman. "I went, 'Well, there are two versions of this story, I’m going to go with the least rape-y,'" he says. He chose the Gerd who actually wants to marry a Norse god. "And then I had people going, ‘Why did you rewrite the story?’ And I said, ‘Actually I didn’t, there were two and I got to pick.' And I also had women going, ‘But we preferred the agency of her at least saying no,’ and I went, ‘Well, OK… I’m still going to go with the least rape-y version.’"

He might have been able to rewrite the story entirely, to give Gerd more agency without coercing her into marriage. But at the beginning of this enormous undertaking, Gaiman decided against "making sh*t up." At least, he couldn't make too much sh*t up.

This rule was especially hard to follow when it came to the goddesses who make cameo appearances in the Norse myths, but whose stories are lost to the ages. Gaiman mentions Eir, the doctor of the gods, and Vor, goddess of wisdom, and Sjofn, goddess of love, but their exploits were never recorded by Snorri or anyone else.

In fact, a huge amount of Norse mythology is lost to us now. Only a small fraction of the tales survived. "The ones that survived, tended to survive for a specific purpose," says Gaiman. "Which is, weirdly enough, not the joy of telling tales, or that somebody wanted to preserve them. Most of the ones that survived, survived because they made sense of poetry."

Icelandic poetry made use of a lot of metaphors or "kennings" back in the day. The phrase "Freya's ransom," for instance, would evoke "gold." And so the stories were preserved as a sort of poetic footnote, to make sense of the poetry of the day.

"Most of the ones that survived, survived because they made sense of poetry."

"It’s as if every rock song written now were quoting from the songs of the Beatles," says Gaiman. "So somebody goes off and says, ‘In order to understand the songs being written now, here are five Beatles songs, with explanations of ‘When I’m 64,’ ‘Lovely Rita Meter Maid,’ ‘Please Please Me,’ ‘Lucy in the Sky with Diamonds,’ and ‘Strawberry Fields Forever.’ And you go, hang on, we have these five songs, I think there may have been hundreds more that we don’t have. And that is kind of how it feels with the Norse. We have lists of things, and you know that were there are lists of gods, there were stories. You just don’t get the stories."

Some reviewers have criticized Gaiman for not including the pre-Christian versions of the Norse myths in Norse Mythology, but, in fact, there are no pre-Christian versions in existence. The stories were told orally. And worshiping the pagan gods was made illegal in Iceland, where the myths were eventually recorded. Although if you were quiet about it, authorities might let it slide. "You don’t get that with things like murder, murder remains illegal whether they catch you or not," says Gaiman. "But worshiping the pagan gods wasn’t illegal if nobody caught you."

This was a challenge, since Loki of the early myths is more of a quick-thinking rascal, the mischief-maker who everyone loves to hate. "It’s like a sitcom, you know? He’s like the one who is just a little bit smarter than everybody else, who’s going to get everybody else into trouble," says Gaiman. He's the one getting the gods into trouble with his "brilliant" plans, and he's the one to get them out of trouble again by, say, transforming into a horse or dressing Thor in drag. "And it’s fun! And it’s funny, and it’s kind of lovable. And he’s the wind-up key that sets the clockwork of the story into motion. And that’s great. And then it gets darker... He sort of edges over and starts becoming, you know, an embodiment of evil."

"It’s like a sitcom, you know? [Loki's] like the one who is just a little bit smarter than everybody else, who’s going to get everybody else into trouble."

Norse Mythology is fairly unique, after all, in that its gods are not immortal. The gods will die in the fated Ragnarok, the divine apocalypse that Gaiman tackles in his final chapter. But rather than end on a sour note of death and despair, Gaiman zeroes in on a minor moment in Snorri's tale: the few surviving gods finding some chess pieces in the grass.

"That was a weird and wonderful moment in the writing," says Gaiman. "I wrote the Ragnarok chapter. I was in a house in Hudson, New York, two years ago, during what turned out to be, again, one of these mad winter storms. Mad winter storms seem to be a feature. And so the mad winter storm is going on, I’m stuck there, and during the night the power went out, completely." There was no wi-fi in the empty house, no way to back up to the cloud, so the entire chapter had vanished for good. "So I re-wrote, I had to start again with Ragnarok. And it was the second time through that, what started to become more and more important to me, were these golden chess pieces that they find in the grass."

Snorri doesn't specify what the pieces are or why they're important. "But somewhere in there the idea that these golden chess pieces were the gods themselves came in, that was something I absolutely made up," says Gaiman. "The golden chess pieces are not described. And I thought, they might as well be the gods. And then at the point where they start to play again, well, this is the cycle. And it just felt like it made everything work. And I was so unsure of the line, ‘And the game begins anew,’ that I asked my editor, Amy, ‘What do you think?’ And she said, ‘I don’t know.’ And I said, ‘Well, go and ask people in the office.’ And she came back and she said, ‘Basically half the people like it and half the people don’t.’ And I went, ‘OK, I think I’ll go with the people who like it then.’"

And so, as Gaiman says, the game begins anew. A new cycle for anyone returning to the frosty gods of old, or anyone discovering the Norsemen for the very first time.