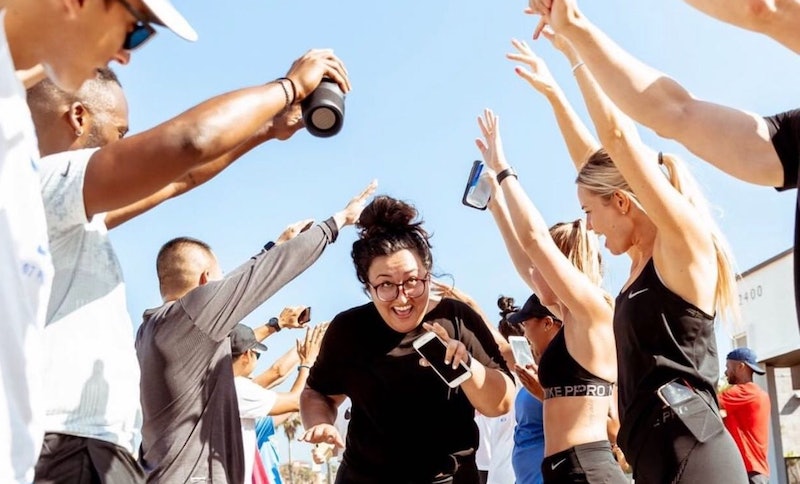 Imagine a runner. For me, the word conjures up images of a person who wakes up at the crack of dawn and likes it; someone whose thighs are made of — not steel — but tungsten; who does squats for breakfast, and runs roughly 900 miles per week and BRB, is, in fact, somehow running right now. I am, ahem, not that person by nature. I sleep in as late as my cat will allow. My thighs are the careful result of red wine and Del Taco. And, until very recently, I had never run a mile in my life. Ever. So, naturally, when Nike invited me to participate in a series of runs for “reluctant runners,” in celebration of the launch of their newest shoe, the Nike Joyride, I was beyond reluctant. I was terrified. But over the course of 3 months, I somehow went from dreading running to becoming a runner. Here's how.

I showed up to my first run full of anxiety. When I first tried on the Joyrides, the patented "bead technology" (a Nike-only technology, which uses a "proprietary cushioning system made of thousands of TPE beads") felt unlike any shoe I had worn before. It offered an effortlessly comfortable fit with an added bounce to every step, like what I'd imagine it'd feel like to walk on a cloud. Plus, the colorful beads make the shoe just look fun, reminding me of the pride I once felt wearing light-up shoes as a kid. The Joyride was designed specifically to make running easier and more accessible, while reframing the conversation around running with a focus on joy.

And yet, I couldn't get past the Joyride tagline, “enjoy the run." Enjoy the run? I thought. How am I supposed to enjoy anything about running? The sweat, the heavy breathing, the leg pain. It’s bad enough that they expect me to run at all. Now I have to figure out a way to enjoy it?

I’ve never had a positive relationship with running. As a kid I was thoroughly outdoors-averse. With the exception of the annual elementary jog-a-thon, which was hardly a feat of athletic endurance, I didn’t participate in any physical activities or sports. The first time I was ever pushed to run any significant distance was in high school, when we had to run the mile in P.E. class, which was its own nightmare. Each Friday, our P.E. teacher held everyone back from “Friday Free Time” until everyone completed the mile. As you can imagine, some kids (the fast kids) were less than thrilled to have their free time hindered, and chose to sit on the grass and hurl insults while the slower kids (me) suffered through each lap. At some point, I convinced myself it was easier to take the harassment if I walked and made no effort, then to try and look dumb. Thus, my relationship between running and shame was born.

In college, I tried to take up running but with a bad case of asthma, recurring shin splints, and no support group to keep me motivated, my running journey hardly made it out the door — only to enmesh my relationship between running and self-hatred. I’ve tried to become a runner over and over again, and, with each failure, I’ve felt worse about myself and learned to loathe running even more.

According to Mark Kennedy, former kinesiologist and founder of None To Run, a running program for beginners, that’s a common trajectory. “I think the main perception of running that makes people so against it is simply that it’s too difficult and it hurts,” Kennedy tells me. "But it doesn’t have to be that way," he adds. Kennedy explained that most runners expect too much, too soon, and associate leg cramps and burning lungs to failure instead of working up gradually. “More often than not, [running] is a miserable experience of suffering and anxiety," he says.

When I started posting about my new running journey, I was flooded with messages from people who felt that sentiment. Messages like, “Running is the worst,” or “I’m afraid people will judge my body or how slow I am.” On one running message board, a woman expressed in painful detail that she only runs on trails during non-peak hours to avoid being seen. There’s something about running that’s inherently vulnerable.

I experienced that vulnerability again, first hand, the day I showed up to my first Joyride event with Nike. As I prepared to hop on a treadmill, surrounded by people who looked more athletic than me, I worried if anyone would notice how much slower I was, or if I’d be judged if I had to stop to catch my breath. To my surprise, however, at the end of the run, I was only greeted by cheers and high-fives. I was encouraged to go at my own pace, challenged in a safe and supportive way and surrounded by others looking for a healthy and positive experience. It was the first time I ever experienced running in a way that wasn’t associated with shame. Nike coach Bec Wilcock looked at us and said something I never expected to hear: “Unfortunately, you’re all runners now.”

I could barely run for 45 seconds straight without a break, and yet those five words gave me chills. Not as the result of dread but because, for the first time, it clicked that running could be for me. It didn’t have to be about pace, or distance, or achieving a certain body type. I didn’t have to impress anyone. It could be my own journey.

Since then, I've adopted the None To Run program, and in 12 weeks I went from only running for under a minute straight to successfully running 25 minutes. According to Kennedy, the program is successful because it starts small and “builds confidence and consistency.” Each week, I found myself advancing gradually — and the small wins were exactly the motivation I needed to propel me forward.

A few weeks ago, on a run, a grown man slowed down in his truck to mock me. A year ago, that experience would have broken me. I would have slowed to a walk, and likely never run in public for a long time. Instead, I looked down at my Joyrides and embraced my run — even in all its slowness — because I knew I was achieving something I had never done before. I turned up Cardi B in my headphones, and surprised myself with my fastest run yet.

While I still consistently wear (and love!) my Nike Joyrides, I don't consider myself a reluctant runner anymore. Now, I’m a relentless runner. I run several times a week and I'm training for upcoming 5K and 10K races and believe it or not: most days I even look forward to it.

More like this
I Tried Kendall Jenner's No-Pants Look As A Plus-Size Woman
By Sarah Chiwaya
Bonnie Milligan's Wellness Routine, From Daily Journaling To Drugstore Teas
By Jessica Derschowitz
The 9 Best Exercises For Improving Coordination
By Carolyn Steber
All The Surprising Benefits Of Having Strong Glutes
By Carolyn Steber
Get Even More From Bustle — Sign Up For The Newsletter
From hair trends to relationship advice, our daily newsletter has everything you need to sound like a person who’s on TikTok, even if you aren’t.