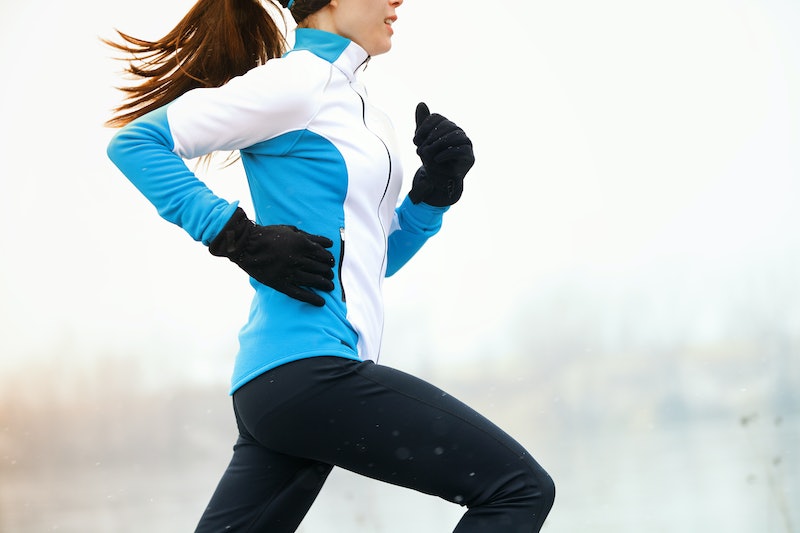 It seems like after a certain age (26?), everyone embraces long-distance running. Goodbye, day drinking; hello, marathon training. Running has many benefits, from increased happiness to weight loss. It may even reduce your risk for certain kinds of cancer. But if the farthest you've ever run is to catch the subway, the idea of doing it for exercise can be daunting — even if you are totally in shape from other workouts. Just one jog can make you question why anyone would ever want to run 26.2 miles, especially for fun.

So we got Elizabeth Corkum, a top running coach with the Road Runner's Club of America, to share her tips on pounding the pavement the right way — whether you're just trying to survive one mile or you're dreaming of future marathon medals.

Don't get overambitious: Just because you can handle a killer SoulCycle class or sweaty hot yoga session doesn't mean your first few runs should last the same amount of time. Instead, stick to 20 to 30 minutes (you'll be surprised at how long it feels!). "If you need to combine walking and running, that's totally fine and will help build cardiovascular strength," says Corkum. "As your body adapts to the demands of running, you can increase your time. Building slowly minimizes injury and mental burnout."

Focus on minutes, not miles.

It's tempting to measure your run by distance, but trying to add even a quarter mile each day can be tough when you're just starting out. "For a new runner, focusing on minutes is best," says Corkum. "As you become stronger, your pace will naturally increase." And once your pace increases, you'll start covering more ground in less time — track your time and distance during each run, and you'll see how quickly you progress.

To paraphrase Ice Cube, "This ain't a track meet, it's a marathon." As in, don't sprint from zero to 60 miles per hour straight out of the gate. "Instead of going by a number, go by effort," says Corkum. "If you were running next to a friend, you should be able to continuously hold a conversation without gasping for air." Also, the right pace for someone else isn't necessarily the right pace for you, so if you actually are running with a friend, try to agree on a speed that feels OK for you.

Don't be afraid to go outside.

I know, polar vortex, winter storm Maximus ... why would any sane person want to work out outdoors? But, "as long as conditions outside aren't icy or dangerous, running outside is best," says Corkum. "Running form and stride often change on a treadmill, and that can cause injury. Running outside activates and requires more muscle involvement than running on a belt. Plus, you'll often burn more calories."

Hydrate before your run.

Just one cramp can be enough to kill your momentum and motivation. "Cramps throughout the body (especially legs) are often a sign of dehydration," explains Corkum. But guzzling a gallon of water mid-run isn't a quick fix. "To avoid cramps, hydrate well all day." And if you get one of those annoying side stitches, it's probably caused by poor breathing patterns. "Focus on breathing out hard, and within a few minutes the pain will go away," says Corkum.

Stretch after your run.

All those fancy lunges and twists might make you look like you know what you're doing, but apparently, stretching pre-run doesn't do much good. "In fact, some research suggests that static stretching cold muscles can cause damage," says Corkum. Warm up with an easy five-minute jog or brisk walk, then cool down the same way. But, "after your run, it's very important to stretch your warm muscles," she advises. "Focus on stretching your calf muscles to avoid shin splints, and stretch your IT band (along your outer thigh), quads and glutes to avoid common running injuries."

Give it a rest.

Now that you know how to do it, don't overdo it. "Rest is necessary for your muscles to rebuild stronger and for your body to adapt to the demands of running," says Corkum. "I recommend new runners stick to a schedule where they run three to four non-consecutive days per week." And about thirty minutes after your runs, refuel with a high-protein snack—it will help jumpstart the recovery process and make it easier to get back out there. Corkum's picks: Greek yogurt, protein shakes and chocolate milk.