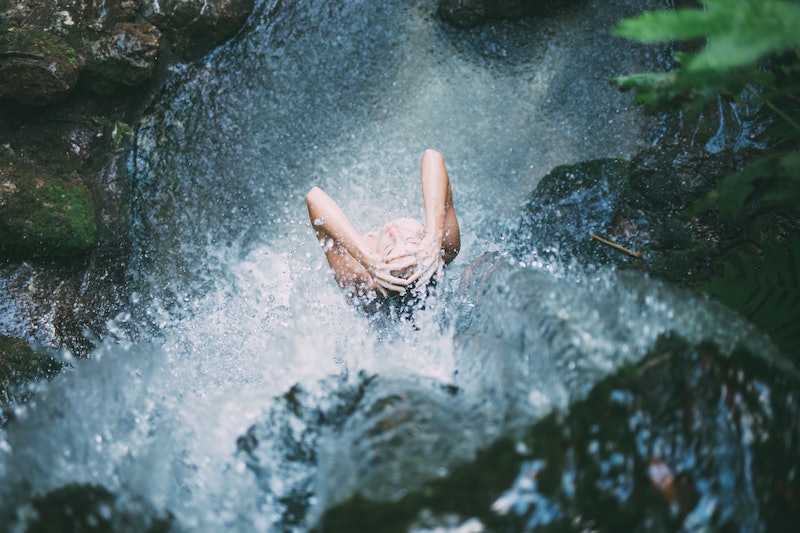 I can't go one day without showering. I have friends who only shower once every two or three days. Then there's the one person who smells like they never bathe, ever. So: How often should you shower? Science has a very surprising — and I imagine potentially smelly — answer.

Skin care company Flint + Flint recently explored the bathing habits of more than 2,000 women and found that 57 percent of them don't bathe every day. Then there's the MIT graduate Dave Whitlock, who created a spray called Mother Dirt AO+ Mist, which lives off the ammonia you produce when you sweat. Whitlock says he hasn't taken a shower in roughly 14 years. "No one did clinical trials on people taking showers every day," he told CBS Boston. "So what's the basis for assuming that that is a healthy practice?"

Well... historically speaking, physicians beginning the practice of regular handwashing literally saved lives, which is compelling evidence for trying to stay clean. But maybe Whitlock has a point, so I decided to explore further.

There is, in fact, a great deal of evidence that too much showering disturbs the human microbiome — a collection of bacteria, archeae, viruses, and other types of microbes living in and on your body. They're important to your health and play a big role in immunity, digestion, and heart health. Having healthy skin isn’t merely a superficial issue; it goes deeper than that.

What about at the end of a long, hot day, when you're sweaty and smelly? Research suggests that the reason this happens is because we've disturbed our microbiomes so much. People who have returned to a relatively shower-free life claim that once your body adjusts, you just... stop smelling funky. Other pesky nuisances like acne are also said to be a result of a disrupted microbiome, which totally challenges the belief that you should be cleaning your face regularly.

Dermatologists Dr. Joshua Zeichner and Dr. Ranella Hirsch echoed these sentiments, explaining that our obsession with showering is more of a cultural thing than a health thing, since the social norm says that you're not clean if you don't bathe. In actuality, showering too frequently (especially in super hot water, which is my absolute favorite) can dry out and irritate your skin, remove the good bacteria that you should be hanging on to, and even create small cracks in your skin. So, according to these doctors, here's the big answer: If you don't sweat too much, showering every two or three days will suffice.

Now, if you have a very physical job, you live in a hot or humid climate, or you exercise a lot, daily showers might be the better answer. (I exercise four days a week and live in the desert. I can't imagine skipping showers.) When your body produces excess oil, it can clog your pores and lead to acne and folliculitis, according to dermatologist Dr. Monika G. Kiripolsky. It's the perfect environment for bacteria to grow.

If you prefer to shower daily, try not to lather your whole body, instead focusing on the especially smelly parts (like your underarms and nether regions). Perhaps even more helpful is remembering to change your undergarments every day. Research has found that we leave way more dirt and oil in the clothes we're wearing than we do in the shower. (Ew!)

At the end of the day, you have to find what works best for you and your body, but I'm definitely curious about cutting out maybe one shower a week. Who knows? It could be life-changing!

More like this
6 Abortion Advocates To Follow On TikTok
By Sara Youngblood Gregory
The Best Underwear For Sensitive Skin, According To A Dermatologist
By Alexa Vazquez
The UK Abortion Laws In 2022, Explained
By Sophie McEvoy
How To Protect Your Digital Privacy If You Need An Abortion Post-Roe
By Kaitlyn Wylde
Get Even More From Bustle — Sign Up For The Newsletter