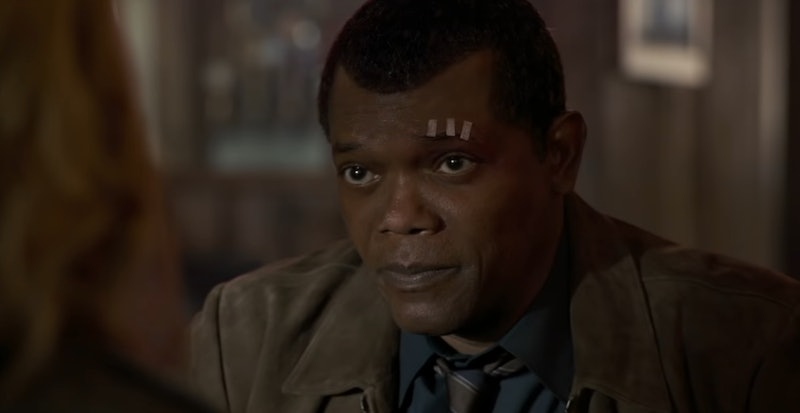 After the, um, results of Avengers: Infinity War, Captain Marvel is taking things back a couple decades. The film, out Mar. 8, is obviously Captain Marvel's origin story, but it also involves a younger Nick Fury. How old is Nick Fury in Captain Marvel, exactly? He's probably around the same age that actor Samuel L. Jackson was then.

Captain Marvel is set in 1995, which means it takes place over 20 years before Avengers: Infinity War. According to his bio on the Marvel Cinematic Universe Fandom page, Nick Fury joined the Army right after high school and was in action in the Soviet Union during the Cold War in the 1970s. If this was soon after he left school, Fury would have been in his twenties in the 1970s, which would mean he'd be in his forties in the 1990s. This lines up with the age of Jackson, who is currently 70 years old and would have been 46 in 1995.

For Captain Marvel, Jackson was digitally altered in order to appear younger, as reported by Indie Wire. Reacting to the transformation, the actor wrote on Instagram, "Wow, this Marvel de-aging thing is doper than I thought! #twoeyedfury #captainmarvelmovie."

De-aging technology has been used for Marvel movies in the past, including for flashback scenes of Hank Pym (Michael Douglas) and Janet van Dyne (Michelle Pfeiffer) in Ant-Man and the Wasp. In that movie there were younger body double actors whose faces were combined with the older actors', and these actors were credited on the film. Captain Marvel is going to be the first Marvel film where a character is de-aged for the entire movie. For this reason, it sounds like Jackson is the only one doing any of the acting for Fury, and he's the only actor credited. In Entertainment Tonight's report from the set of the film, they explain that Jackson was wearing a wig and had "a series of dots mapped across [his] face" for the de-aging CGI.

Another big change for Fury is that he won't have his signature eyepatch, because Captain Marvel will finally reveal how he lost his eye. "You'll see, specifically, the origin of what happened to his eye," Jackson told Entertainment Tonight. "You'll find out that he does have a family, that's referenced. You don't see them, but they are referenced in another way. There are things we talk about in his backstory that haven't been talked about before — where he's from, what he's done."

Of course, all of this is different from the original comic version of Nick Fury, which Jackson touched on when speaking with ET:

"There are specific things that are documented about his backstory, back when he was a white guy fighting in the war. [Laughs] I've been reading Nick Fury since I was a kid, so there are a lot of things that I know about him and about his origin story and the people that he fought with and who he knew before all that happened. And then by the time we got to the Ultimates Nick Fury, all of a sudden [he] turns into me, out of nowhere, because of [comic book writer] Mark Millar, and we start a whole new kind of backstory timeline."

While Captain Marvel probably won't give fans an exact birthdate for Fury — although that would be welcome — it will give fans a lot more information about his past and show how he became the man he did.