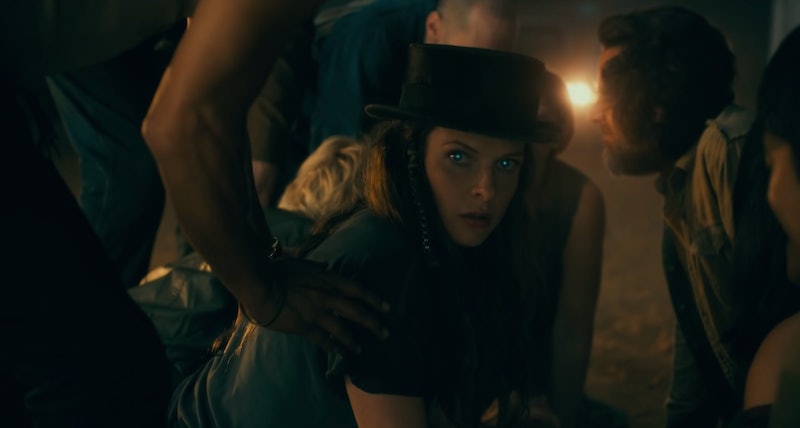 Stephen King stories trade on fear of the unknown, featuring antagonists that tend to be shrouded in mystery. Doctor Sleep, which opens on Nov. 8, is no different, as the origins of its antagonist, Rose the Hat (Rebecca Ferguson), are also steeped in secrecy. All that's known about Rose is that she's originally from County Antrim in Ireland, she possesses psychic powers, and is a leader of a cult of quasi-immortal psychics known as the True Knot. Neither the 2013 book nor the movie say how old Rose the Hat is, but they present her as an ageless, powerful being, one who's more than willing to pay a steep, steep price to maintain that immortality.

It's in paying that price that Rose (whose real name is Rose O'Hara) goes up against Danny Torrance (Ewan McGregor), who, 40 years after the events of The Shining, still struggles with the psychological trauma he received from his experience at the Overlook Hotel. Danny still possesses his psychic ability, which he still calls the Shining, and it's through this ability that he eventually connects with another psychic, a young girl named Abra (Kyliegh Curran). Throughout the film, Danny fights to protect Abra from Rose and her cultists, who are searching for Abra because they aim to torture and kill her to preserve their own immortality.

It's this willingness to torture and kill children in the name of immortality that makes Rose such a creepy villain. The disconnect between her actual age — mystery though it is — and her youthful appearance is central to her identity as a character, as it shows Rose to be a monster with human roots.

Exploring those roots, Ferguson tells Bustle, "I kind of picture her back 700 years." Those 700 years carry a lot of experience as well, with plenty of memories worth holding on to. Ferguson goes on to explain, touching on what she believes to be the origin of Rose's namesake: her hat. She says, "The hat for me, I think, was taken from the Great Depression. Which was great for her. And it just kind of lived with her. I guess when you’re that old and you’ve seen so much, you hold onto memorabilia, those small things in that caravan that have traveled for years."

Like Rose's age, the hat's origin isn't directly addressed in the book or the movie either, but it's described as a battered top-hat that's special to Rose. The connection shared between them is mysterious, but it's strong enough that Rose goes into a rage when it's removed from her head. Variety's review of the film cites Ferguson and this style — specifically her hat and jewelry — as one of the more creepy elements of the film. It reads, "Ferguson, in her magician’s hat and hippie jewelry, plays her like a satanic member of the Rolling Thunder Revue — a ’70s free spirit who thinks it’s her right to live as long as she wants to, whatever it takes."

Commenting on Rose's free spirit, empowered nature, Ferguson says to Bustle, "She’s so sexual and predatory and loving and caring and she has all the elements of what a human being has that has all the elements of a zest for life. And that mixed with a f*cking great sense of style, let’s call a spade a spade, it’s very liberating, getting all of these aspects in one character."

"You don’t have to hate her, you don’t have to fear her ... and yet you can feel all of these things for her," Ferguson explains as she explores Rose's glamour. She continues, "So she’s so grand that there’s something with her that relates to a lot of different people and genders."

That alluring charisma, combined with the fact that Rose and the cult have orchestrated the torture and murder of many different children, evokes themes from of another type of immortal monster: vampires. In a chat with Cinema Blend, Director Mike Flanagan commented on vampiric themes, saying, "Our cast is much younger because part of the appeal of that family as well, for me, is what if you can bring a family unit together like that with the promise of living young forever. Which is, I think, at the heart of all vampiric stories."