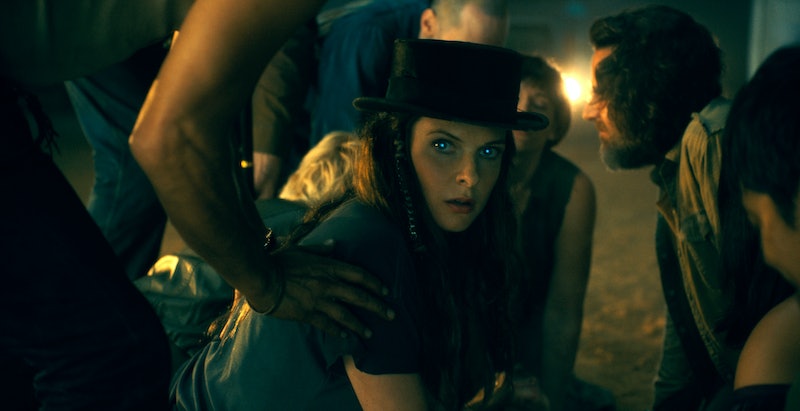 Spoilers for the Doctor Sleep movie ahead. If you're down with The Haunting of Hill House, you're already familiar with creator Mike Flanagan's eerie, character-based approach to cultivating scares. The Shining sequel (out Nov. 8) isn't a 10-episode series, but its 2.5 hour runtime puts long stretches of action between its few violent moments, the most disturbing being one of the True Knot's kills. In Doctor Sleep, Jacob Tremblay plays a little leaguer who's kidnapped, tortured, and eventually murdered by the band of roving hunters, because he, like Dan Torrance (Ewan McGregor plays The Shining character, all grown up), possesses "the shine." The scene was as upsetting to shoot as it is to watch, according to Rebecca Ferguson, who plays the True Knot's leader, Rose the Hat — and all because of the 13-year-old actor's talent.

"I was very lucky that they cast him, and he was able to do this role. Because it was nothing short of incredible," Ferguson says, speaking to Bustle over the phone. "When they said 'action,' and he started acting, and I just burst out crying, I realized that I needed to step up the game to not mess up the scene."

The True Knot are not immortal, but by feeding off of "steam" — the psychic essence emitted by people who shine — they can live hundreds and hundreds of years. Shine and therefore steam are particularly strong in children, which is what makes their non-stop hunt extra chilling. None of them, especially Rose, seem to feel any remorse for their actions, hence Ferguson's efforts to get her visceral reaction to Tremblay's performance under control.

In its opening moments, the film cuts away from the group after they lure a little girl away from her parents, letting her die offscreen. No such luck for the audience when it comes to Tremblay's character, Bradley Trevor. He literally feeds the True Knot as he dies, in a long and therefore brutal scene. Evidently, there's even worse sitting on a cutting room floor somewhere.

"There's a huge amount that you guys will never see, because it's too much to handle," Flanagan told Digital Spy of Tremblay's death scene.

"Where someone’s doing a bad deed, what creates the scene is the receiver ... of the evil," Ferguson says. "It’s the same when you do action: Hitting someone or pretending to hit someone doesn’t create the effect, unless someone reacts to the hit. And that is something [Tremblay] was doing. He made that scene brilliant."

Tremblay won over audiences and the industry when he starred alongside Brie Larson in 2016's Room and became her partner-in-crime during the subsequent press tour and awards season. He went on to appear in Wonder and Good Boys, among many other films. He got a dog. He went to a climate change rally. The moviegoing public is a little protective of him, OK? Flanagan was counting on it.

"Casting Jacob, we initially thought, 'Oh, this is going to be even better, because people love him so much. Just the fact that it's him is going to make it horrific,'" he said to Digital Spy. When the scene was finished, the writer/director says, Tremblay "[popped] up, covered with blood," gave his dad a high-five, and then went off in search of a snack, "while the rest of us [were] shell-shocked and traumatized."

So while Bradley's tragic end will likely leave viewers in a similarly fragile state, Tremblay's work left his adult collaborators in awe.

"Age has nothing to do with brilliance when it comes to acting," Ferguson says. "He’s one of the best actors I’ve ever worked with in my entire life."