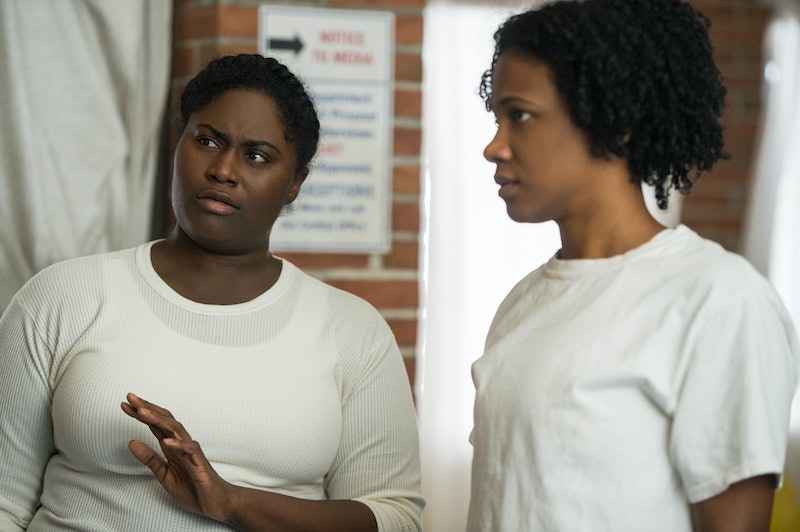 Orange is the New Black Season 5 is one of the most intense seasons yet. And, amongst all the chaos of the riot and that ending, there's one scene I can't stop thinking about even weeks after the premiere. Janae Watson's flashback in OITNB Season 5 is the moment every black woman fears — the moment she realizes that the system truly is rigged. Spoilers for Season 5 ahead.

This moment comes in Episode 5, but the entirety of the season is illuminating about how race and class comes into play in our world. In the season opener, viewers see a complete shift of power as the inmates of Litchfield take over and hold the guards hostage. With no administration to run the prison, chaos ensues, and the ladies take it as an opportunity to grab the media’s attention and demand systematic change. But amidst building their list of demands, the inmates realize that each of their experiences are different.

Janae's own experience is featured in Episode 5, when viewers get a glimpse of her childhood, where she grew up the star student of her public high school. But during a trip to a neighboring private high school Janae wakes up to the struggle she'll continue to face for the rest of her life. She sees that the richer, white students have many many privileges that are out of her reach. In her disbelief and distress, she comes to a realization: Regardless of her accolades, success will always be an uphill battle for her as a black woman.

Like Janae, I grew up going to public schools with mostly students of color from relatively similar backgrounds. I couldn't fathom that I was at any sort of disadvantage because I excelled in my bubble.

Then I got to my private, predominantly white university.

Prejudice reared its ugly head a few times during my days as an undergrad. From seeing black people called the N-word and told to “leave campus” by my peers on the anonymous social platform YikYak, to having my friend’s predominantly black party shut down by nearly 80 LAPD officers in riot gear and six people arrested in 2013 while the mostly white party down the street lead to no arrests. (Bustle reached out to the LAPD for comment but has not yet received a response.) Throughout my years at college, racism was no stranger to me. Still, I didn't fully accept it all until I lost a job at my dream company.

The summer after my junior year, I went for a job at a top tier media company. I was clearly qualified for the position and made it through several preliminary rounds, but I lost the position to a white woman with zero experience.

Here’s the thing, this experience, much like Janae’s, is truly unavoidable. Between 2004 and 2014, black women with a bachelor’s degree increased 23.9 percent, but black women are still severely underrepresented in politics and corporate America, with a large majority of us being tied to the service industry, according a recent report from The Institute for Women’s Policy Research. The same report found that white women make 77 cents on the dollar to a man, while black women make 64 cents.

The report also found that black women with bachelor degrees face more debt and less lucrative prospects than their white counterparts. Ultimately, Black women are paid the least by race and gender ($33,533 annual salary for black women in 2014 vs. $41,822 for white women and $55,470 for white men according to the Department of Labor). Not to mention, that the prison system was practically made to house people of color, with black women going to jail at four times the rate of white women, according to INCITE.

The stats have always been against us, it just takes different people different amounts of time to figure that out. Episode 5 of OINTB taps into that familiar feeling I had when I realized it by showing Janae's story. While her journey is distinctly her own, every black woman can relate to this moment. It's a vivid memory for most, but one we rarely discuss. How do you verbalize the rejection associated with predetermined notions about your work ethic, on a personal level and systematically, based on your skin tone?

Here's a hint: It's hard. It's difficult to come to terms with because the experience is subjective. You never know if it's in your head, or if the skin you wear really does set off a subconscious alarm in others that no one wants to address. But every black woman feels it. Just read Videllia Davis' piece on being a black woman in corporate America. She, too, taps into that feeling. The experiences may all be different, but the lesson is universal. The truth of the matter is, black women don't want to be seen as constant race baiters and white people don't want to be assumed to be racist — so no one talks about this.

The easiest way to deal with this all is to do what Janae initially did, and just give up. But there's a reason the episode didn't end there. Like most hardships, the important thing is not what happens to you, but how you handle it.

We cannot let adversity break our spirits and define our character. Instead, fight must harder and stand up for what we believe in, just as Janae finds a way to do when she and Taystee deliver the inmates' list of demands on OITNB. If we keep pushing for equality and standing up for what's right, maybe some day the ladies that come after us won’t have to fight as hard.