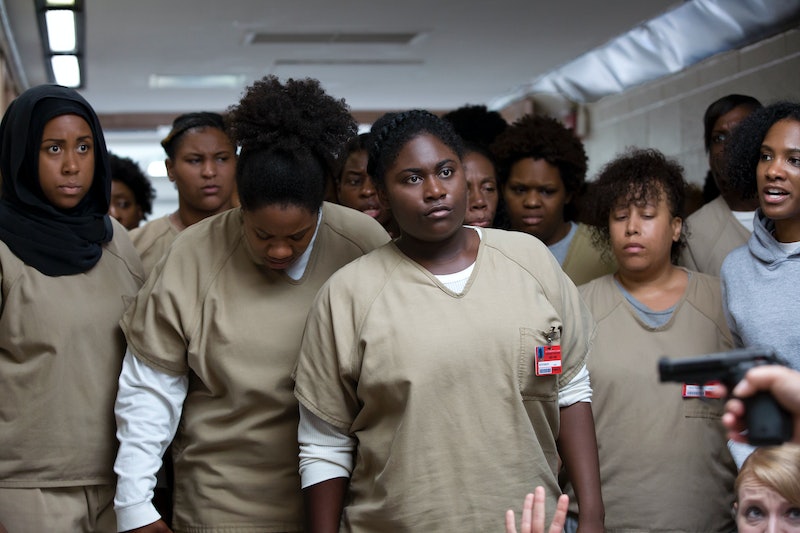 Sacrificing gravitas for humor is hardly ever an issue for the cast and crew of Orange Is The New Black. The unexpected death of Poussey in the OITNB Season 4 finale left audiences heartbroken, incensed, and utterly stunned. However, the writers have guaranteed that the beloved book lover’s death was not in vain. In Orange is the New Black Season 5, Taystee gives a speech that honors Poussey and also so many other black women who should never be forgotten. Spoilers from Orange Is The New Black Season 5 will follow.

Not only does the speech expose the unconscionable conditions and treatment that she and the other Litchfield inmates suffer daily, but most noticeably pays tribute to Poussey and other nameless, faceless, neglected poor women of color such as 17-year-old Darnesha Harris who was killed in 2012 and 23-year-old Korryn Gaines who died in 2016; both were shot dead by police officers and their stories have either been distorted or completely ignored by the mainstream media.

In the show, Taystee opens her speech up beyond just her friend's death. "Our fight is with a system that don't give a damn about poor people and brown people and poor brown people." With this simple, yet specific statement, Taystee not only recognizes those who routinely face injustice and oppression, she also makes it abundantly clear that the entire judicial (and societal) system does not and has not worked in favor of minorities.

That's made abundantly clear in OITNB. Two days after Corrections Officer Baxter Bayley literally crushed the life out of Poussey, the women of Litchfield staged an all-out coup against the prison guards whose abuse of power has gone too far. As the rest of the inmates are torturing the C.O.s, Taystee, Alison, Black Cindy, and Janae use an iPad to record and post a video of the warden correcting the prison’s original statements about Poussey’s death. However, Taystee feels utterly defeated after the video fails to generate buzz on YouTube and becomes a meme instead. "It's all a joke," Taystee laments. Later, when she and her friends tally up a list of the most requested demands the inmates want to end the riot, Taystee is enraged that arresting C.O. Bayley for Poussey’s murder comes in ninth on the list of priorities.

These slights evoke the common sentiments of confusion and begrudging acceptance among black people that fellow human beings simply do not care about black women. Speaking to Time, Natalie Wilson, who runs the Black and Missing Foundation said that "black children who go missing receive less media attention than white kids." And, much like the black inmates' overlooked video on OITNB, lack of news coverage for missing women of color is nothing new. In fact, late journalist Gwen Ifill coined the phrase, "missing white woman syndrome" to acknowledge the disparity in news coverage between white women and women of color.

The writers of OITNB nail the indifference toward black women's lives, especially considering that a majority of the Litchfield inmates would rather have Cheetos, free tampons, and internet access than seek justice for Poussey. After all, justice is an loaded term, especially in the black community. Why strive for what they will likely never get? Naturally, Taystee has to react.

When the media catches wind of the riot, the wellbeing of inmate and Paula Deen-esque celebrity Judy King takes the main stage. With her mounting frustration at the public's disregard for Poussey reaching its zenith, Taystee plans to have the wealthy and white inmate speak on behalf of the inmates to get the attention Poussey deserves. However, upon hearing Judy tell reporters that she has endured "unimaginable suffering" the scene becomes too much to bear and Taystee takes center stage with a powerful speech:

"She will not be speaking for us because Judy King can't speak for the inmates of this prison. She was kept separate from us, held in a private room with better treatment and a seltzer-maker. And moments after our friend, Poussey Washington, was murdered by a guard for doing nothing wrong, Judy King was packing her bags to go home on early release. Because she's rich and white and powerful.

Now our fight is not with Judy King. Our fight is with a system that don't give a damn about poor people and brown people and poor brown people. Our fight is with the folks who hold our demands in their hands. Which you people need to read, by the way, and stop watching this fool sh*t coming out here online and get a hold of our demand list because those demands are fair and necessary, and show that we intend to keep this demonstration peaceful and focused on change.

Now, Judy King is free to leave. She's not a hostage and you can have her back. Judy, get the hell out of here."

Taystee's moment wasn't just for Poussey. This extemporaneous speech almost felt like it was also for the Sandra Blands and Tanisha Andersons, and innumerable other black women whose stories we still don't hear enough of on a regular basis. Instead, we're left with maddening and confounding explanations as to how they died while in the custody of those tasked to protect and serve — as if that is satisfactory, as if that is supposed to pacify us, as if that is the only form of justice black women deserve.

Bland was arrested during a traffic stop after failing to signal a lane change in July 2015. Three days later, she was found dead in her cell. Her death was ruled a suicide. Anderson, a 37-year-old with schizophrenia was taken from her home for "disturbing the peace," slammed on the pavement, and arrested during a mental health episode in Nov. 2014. The excessive force and added pressure on her back eventually caused her to stop breathing — similar to the way Poussey was killed in Season 4.

Their names, like countless others before them, became rally cries for those fighting for civil rights and demanding change. In January, Janelle Monáe led the thousands of attendees at the Women's March in a "Say Her Name" chant, while singing her Black Lives Matter anthem, "Hell You Talmbout," with the Mothers of the Movement. The women of color, whose daughters and sons were killed by police, stood together in protest of the abuse of power by police officers who failed to see their children as human beings. When Monáe shouted, "Sandra Bland!" the crowd yelled back, "Say her name!" She continued listing other victims including Janisha Fonville, Natasha McKenna, and Tanisha Anderson. Monáe then honored each mother during her call and response song by allowing them each to shout their child's name one-by-one.

These women's names, and Poussey's, offer them existence and visibility after they've been wronged. The mere act of saying their name repeatedly will etch them into your mind, and that's what Taystee is asking for. To seek justice for her friend, Taystee had to steal the spotlight from the white, privileged Judy King to get the chance to say Poussey's name, and subsequently prove that a black life matters just as much as a white life. The media may know Judy King, but after Taystee's speech, they will never forget Poussey Washington.

It's understandable that Taystee would think that exposing a violation of the law would elicit an appropriate response — an arrest, a trial, a conviction. But, it's also a reality that things don't always work out that way, especially for minorities. Black victims of police brutality receive character assassinations and justifications for their deaths regularly. Michael Brown was referred to as "no angel" by The New York Times after he was murdered in August 2014. Trayvon Martin was deemed "suspicious" in 2012 by George Zimmerman, the man who took his life, for walking around his neighborhood wearing a hoodie. Eric Garner was killed by a cop who performed a chokehold on him in 2014 until he spoke his last words, "I can't breathe," however, New York congressman Peter King suggested to CNN that Garner's obesity and asthma led to his death as opposed to the excessive use of force.

Although many viewers of Orange Is The New Black watch the show to be entertained, especially by humorous characters like Taystee, hopefully some will find it gratifying to witness her testimony. Given the injustices that black women face in reality, watching an imprisoned black woman deliver an impassioned plea to reclaim the narrative for Poussey and all black women was a turning point for television. Taystee told the public that it's past time for people to start giving a damn about black women, and I sure hope you were listening.