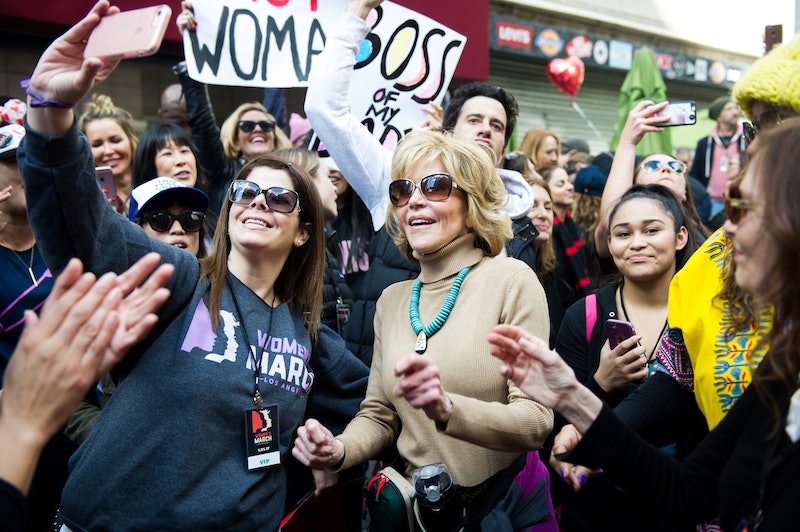 March 8, 2017 is not just International Women's Day, it's also A Day Without A Woman, thanks to the organizers behind the successful and powerful Women's March. It's a movement that women who are able to across the country will observe by taking the day off from work, wearing red, avoiding spending money, and joining together in the streets to raise awareness about gender equality and women's rights. Essentially, women will reenact the events of the first women's day in 1909, where thousands of women left their unfair work conditions and rallied in the streets to spread awareness.

While over a century ago the protests might have been localized, today they're international. Dozens of countries around the world are joining in and adding their voices to the cause. Because the strike is international, it will be incredibly spread out, very different from the marches in January that were much more centralized. The strikes are meant to take on a different tone. Women are encouraged to stand up for their rights wherever they are. So women will stay within their own communities, creating platforms wherever is home. Other women who can't leave work, will simply wear red to show their solidarity and create awareness in the workplace. Here's how other countries are observing International Women's Day:

Starting at 8 a.m., people of the UK are encouraged to "Take time off from waged and unwaged work — the whole day, hours or minutes — to protest, march, flash mob, put a broom outside our door, [and/or] hang a banner from the window."

According to a Facebook event, starting at midnight on Mar. 7, the strike will begin in Chile and go straight through Mar. 8.

They're calling it the "Strike 4 Repeal" and the demand is that the Irish government call a referendum to repeal the 8th Amendment (which effectively bans abortion in Ireland by giving recognition to the right to life of an unborn child) in Ireland.by Mar. 8. If not, they strike.

There's a movement on Facebook to encourage Australian women to strike together against misogyny, and to use the hashtag #solidarityisourweapon.

According to Facebook, the women of Sweden are coming together to make their voices heard for women's pay equality and trans women's rights. The festivities begin at 8 p.m.