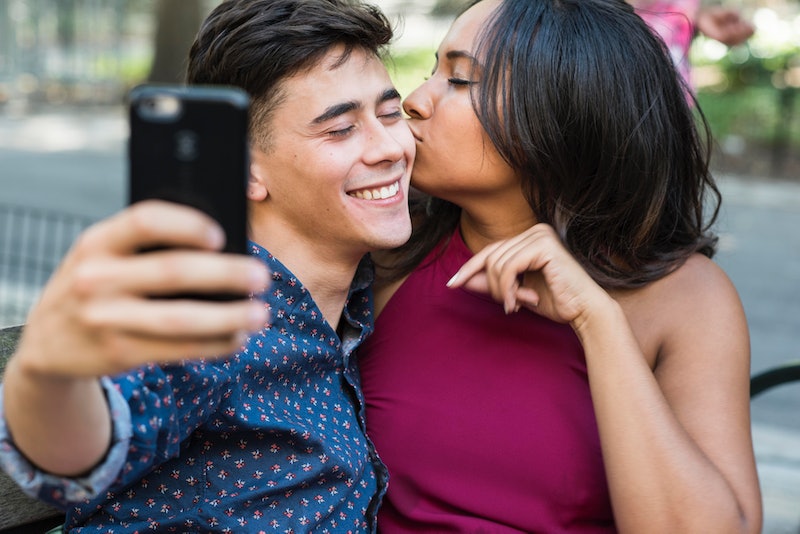 I have a confession to make: I am that person on public transport making out with her partner. I have been told to "get a room" (only once, by a teenager whose sister then started laughing at him for "being jealous"). I am very private about my partner on social media, but on the street and with friends, we're The Smoochy Couple, and I don't care.

PDA still, in many ways, has a bad name. A study in 2016 found that people who indulge in them excessively in front of others are likely showing off, and displays of lovey-dovey behavior on social media have been linked to emotional issues and relationship insecurity. But if it makes you feel good, who cares? Touching your partner has been shown to have benefits: physical connection and touch from a loved one have been demonstrated in studies to calm pain, increase empathy, and help 'sync' you to your partner.

Public displays of affection are a personal choice, but for me they also resonate with the past, both personal and historical. In many periods in human history, women's ability to demonstrate emotional attachment in public was fiercely curtailed or thought to be dangerous. And in light of that, getting affectionate in public as a woman seems like an act of feminist rebellion.

In European civilization, public kissing was, for much of history, the domain of men; researcher Sheril Kirschenbaum notes at the Daily Beast that, from ancient Greece up to the early modern period in Europe, formal kisses between dudes, on hands or cheeks, were signs of fealty, legal binding, loyalty, peace-making, and supplication:

"A king’s subjects would kiss his ring and robe, his hands, or even the ground before him. Similarly, people pressed their lips to the pope’s ring and slipper. The kiss also served as a sign of trust between feudal lords and vassals. Knights kissed at jousting tournaments and would receive one from the person they protected as thanks for a year of service. During this period, many men did not know how to read and write, so a kiss was used as a legal way to seal contracts. They drew an “X” on the line and kissed it to make it legal, which has carried over into the way we now write “X” to symbolize a kiss today."

Before the rise of Christianity in Rome, platonic lip kisses were actually seen as pretty normal among family members, but unmarried girls were excluded from this activity — presumably because it might endanger their virtue. Roman wives were celebrated for their "chastity" and propriety in public; the poet Ovid was actually banished from Rome by the emperor Augustus for his book The Art Of Love, likely because of its racy content.

Kissing in public took on complicated overtones as Christianity rose in Europe, in part because while the Bible promoted the "kiss of charity," a kiss of greeting between fellow Christians, it also noted that Judas's signal of betrayal was a kiss on Jesus's cheek. Medieval couples were often meant to kiss in public only once, at their wedding ceremony, and there were strict restrictions on "kisses of peace" and other legal and formal activities, often excluding women. By the 17th century in America, women could be prosecuted for adultery if they were seen with a man who as much as had his arm around them, and an 18th century conduct manual recommended that it wasn't even acceptable to kiss a woman on the cheek when first introduced because it produced "unhappiness" for her. Affection of any kind between men and women in public was threatening to a woman's reputation and therefore a lessening of her value in patriarchal society. In 19th century England, it wasn't even acceptable for unmarried women to speak to men without a married female chaperone present.

Against that backdrop, the freedom to publicly embrace a partner, married or not, feels rather like a choice born of liberation. Public displays of affection became more acceptable in the West in the 20th century, aided by early Hollywood (which celebrated the onscreen kiss with different trendy poses, like the gently-lifted leg or the sideways dip). In societies that retain stricter gender roles, public displays of affection remain, in many senses, taboo, particularly if the couple are unmarried. The Atlantic reported in 2014 that couples across India staged public kiss displays as protests against "vice police" who opposed any PDA as morally corrosive. In Spain, by contrast, public display of affection have become more accepted, as young people living with their parents face serious societal restrictions on bringing partners home for privacy.

For queer women or gender-nonconforming folks, there's an additional dimension to PDA. Public displays of affection for gender-nonconforming people are often carefully moderated to guard personal safety. Violence against the LGBTQ community for daring to publicly exist continues to be an issue, even in societies that are supportive of LGBTQ people. In less tolerant places, the choice to hold hands, kiss or show signals of affection is one that remains off-limits for the sake of remaining unharmed. To be able to kiss a partner in public is still, in many ways, a privilege accorded to heterosexual-presenting couples. This is an issue with which I'm intimately familiar, as a person who has dated women — and been harassed on the street for holding hands with them. Every kiss I experience with my husband in public carries the recognition that many, many women lack the same privilege with their own partners. I never stop feeling frustrated and furious that simple acts of public love are allowed due to my partner's gender.

PDAs are rarely simple. Beyond demonstrations of love, they also encompass theories of gender, regulations of behavior, and ideas about human freedom and the validity of love. We deserve to make out with whoever we like in public, and we're not sorry.

More like this
The Case For A Hard Launch Summer
By Morgan Sullivan
Are Gemini & Scorpio Compatible In A Relationship?
By Kristine Fellizar
The Most Compatible Life Path Numbers, According To Numerologists
By Kristine Fellizar
Here's How To Practice Self-Love In Small Ways Every Day
By Mackenzie Sylvester
Get Even More From Bustle — Sign Up For The Newsletter