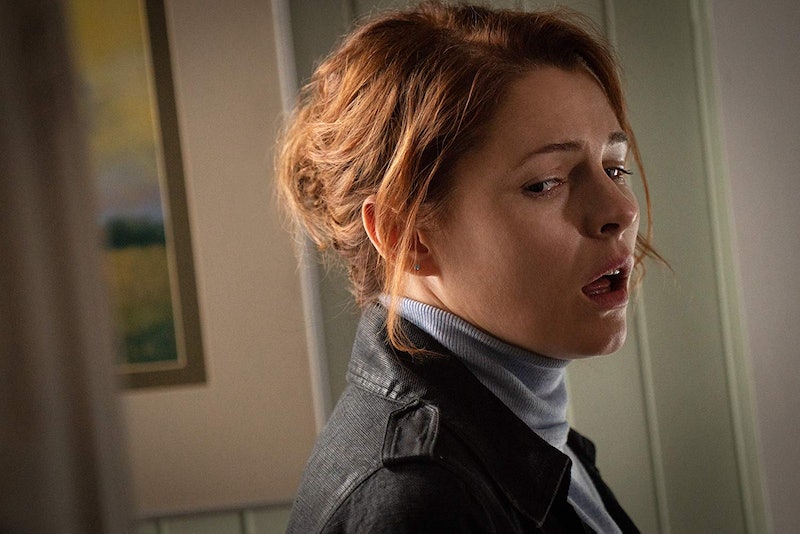 If you've already read Stephen King's Pet Sematary, or watched the latest rendition of the film, in theaters now, then you know that it's so much more than just a slasher story. The novel digs deep into the sheer psychological torment of grief and loss, which made making the movie a personal experience for Amy Seimetz, who plays Rachel Creed. Speaking over the phone, she tells Bustle why she thought it was important to be a part of this reimagining of King's work as it addresses these serious, unspoken, and difficult issues "without feeling preachy."

"It’s still heavy, it’s just a much more interactive and cathartic experience for the audience," she says.

Seimetz, who's also a writer and director, was drawn to the project because of her longtime love of the source material. She says that she first read Pet Sematary at the tender age of eight. She gravitated towards horror as a genre even then because of how much imagination it involved." "As a kid, there’s a naughtiness to horror films and you feel like you shouldn’t be watching them, or you shouldn’t be asking these questions," she explains. "And then there’s also this magical, 'What if this was possible?' Because when you’re a kid, and you’re developing your brain, it’s just as possible to have zombies as for me to be a doctor."

But as an adult, she's found different points of identification. Seimetz's favorite passage in the entire book, and her main source of inspiration throughout the filming of the movie, is the part when her character Rachel talks to her husband Louis about losing her sister — and how terrible it was not only to watch her ill sister suffer, but also to feel deep guilt because she wished for an end to both their suffering.

"She is crying, she’s really sad. But then she’s also angry, and she’s also maniacally laughing, and thinking like, 'Isn’t this so f*cked up?' And then also is just despondent, and obviously very traumatized about the experience, and that was just so accurate," describes Seimetz. "That passage really carves out, and hits every nook and cranny of what grief is."

She felt this keenly, as Seimetz took care of her own father for a period before he passed away. "There’s so much guilt that comes with losing somebody," she says. "Not just because you have these thoughts while they’re suffering, like, 'I just want them to go so that they don’t suffer anymore,' but also that I don’t suffer anymore. But the truth is the suffering never ends." She laughs, then continues: "I laugh about very dark things. That’s also why I like the book and the movie so much is that, at a certain point, you just can’t keep crying about your pain. Sometimes you have to laugh at it. "

Of course, the film adaptation of a beloved book can't keep all the details, and Seimetz wishes that some of the more mundane, loving aspects of the Creeds' relationship had made it in. "There are so many little details in the marriage, about them being husband and wife, that I thought were so sweet," she says. "They go from fighting to them being in bed, and her farting really loud, and then them laughing hysterically at it."

As much as the actor loves King's darkest novel, there really isn't room for all 374 pages of the book in an hour and 40 minutes. "It’s really hard to get the specificity and the amount of detail that King put into the book on the screen," she says. "You have to curate it."

Still, the actor was able to convey the details that mattered to her most. Beyond the horror that comes with the forest and its curse, what she found most disturbing — even as a child — was the realistic way the book told the story of a family going through change, grief, and pain.

"It was listening to an adult inner-monologue about his feelings about his wife and his kid, and they’re not always the nicest thoughts. It’s already pretty sinister and dark, but it’s also accurate," she says. "It’s like [Louis's] exploration of what that feels like, and the mania that surrounds loss and grief is so accurate and so on-point, the way [King] wrote it. And so, that’s what attracted me. It’s not just for scares."