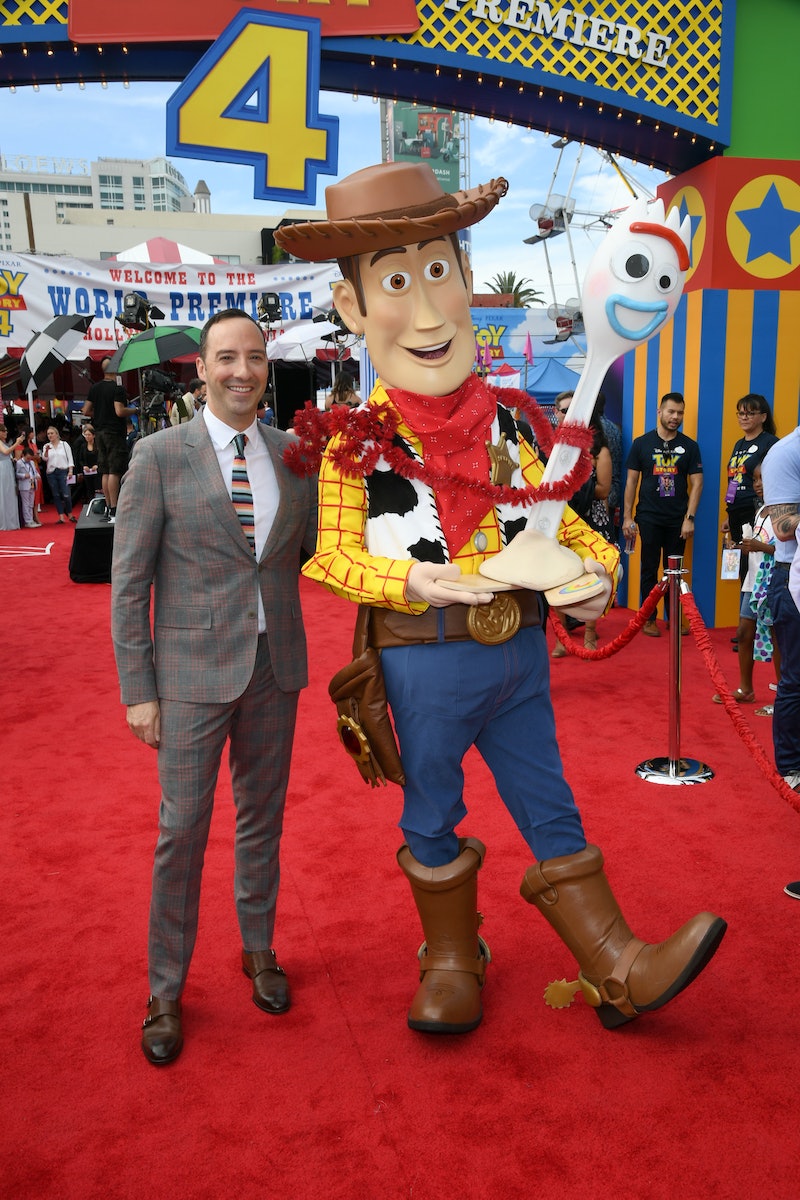 You probably walked out of the theater after Toy Story 4 with a new favorite character. Forky, voiced by Tony Hale, is a toy that Bonnie (Madeleine McGraw) made out of bits and pieces she found at her kindergarten orientation, which is why he refuses to believe he belongs in anything other than a bowl of chili and then the trash can. Forky's crisis of confidence and purpose is relatable to the Veep star, who has a history of playing nervous characters. Speaking over the phone the day Toy Story 4 hit theaters, Hale says that roles like Forky and Gary have helped him rethink his own anxiety.

"When I was younger it [was] kind of an embarrassing thing to be bullied, obviously, or be made fun of. Or when you're in an anxious place or in a fearful place, it's not something that you actually own or take pride in," he says. "I'm given these characters [where] you can express it with humor and own it and be bold with it." For Hale, "owning" his anxiety through his work has been a kind of therapy for him. "In addition to a lot of other therapy," he adds with a laugh.

"I learn to manage and live with anxiety and learn tools to keep me present and [help me] walk through life and not be such a victim to my emotion and my thoughts," Hale says. He goes on to explain that these now iconic comedic characters he's played — Forky, Gay, even Buster Bluth from Arrested Development — remind him of a Christian verse that he finds helpful. "It talks about [how] something that was so damaging and hurtful for you as a kid can be used for good somehow in the future," he explains. "I feel like my journey through life and anxiety... it's cool to see how it's used to hopefully make people laugh or [for] restoration, or good in people's lives, or good in my own life."

Forky's incessant insistence that he belongs in the trash certainly indicates a lack of self-esteem, and Woody (Tom Hanks) serves as a mentor, teaching him that he's much more now than just a used spork. "Forky is grounded by Woody saying, 'I have purpose and I have value,' and I think there's moment where you need those people around you to remind yourself of your value," Hale says.

For Hale, playing a character who receives the emotional support and friendship that he desperately needs is a big difference from the roles he's best known for. "Gary from Veep needed Woody in his life," Hale jokes of the bag man — and punching bag — he played to Julia Louis-Dreyfus's immoral politician for seven seasons of the HBO comedy. "He needed much more of a nurturing presence, because Selina Meyer sure wasn't giving it to him. That was definitely a very dysfunctional relationship, and even though he might've always been giving, he needed someone like Woody to be like, 'Hey man, you have purpose and you have value, you don't need to be in this abusive situation.'"

Gary and Forky aren't just different in the support they receive, however. Hale tells Bustle that both characters, while anxious and often overwhelmed by life, present the actor with different challenges in expressing such inner turmoil.

"There was so much going on in [Gary's] head ... Selina never let me speak, so I really only had my face to express it. I could express that neurotic energy through my face and my small actions," he says.

Forky has almost the opposite problem. "Forky was really limited in his physical expression because he had no flexibility in his body, he was just a spork. There was no control over his eyes, his arms were almost way too flexible, so it's like the voice became all of his expression. He would vocalize where my other characters weren't allowed to vocalize," Hale explains.

A spork going through an identity crisis might not have been an easy character to define, but Hale nails the vocal performance. And that's likely because the actor know what it's like to have the same sort of questions that Forky has. Like, "How did this happen??" But the this for Hale was having a starring role in the latest Toy Story, which he's still processing.

"It's still hitting me in waves that I'm even associated with this one," the actor says. "I went to the premiere last week and I even had a moment like, 'Well, maybe they didn't cut me out.'"