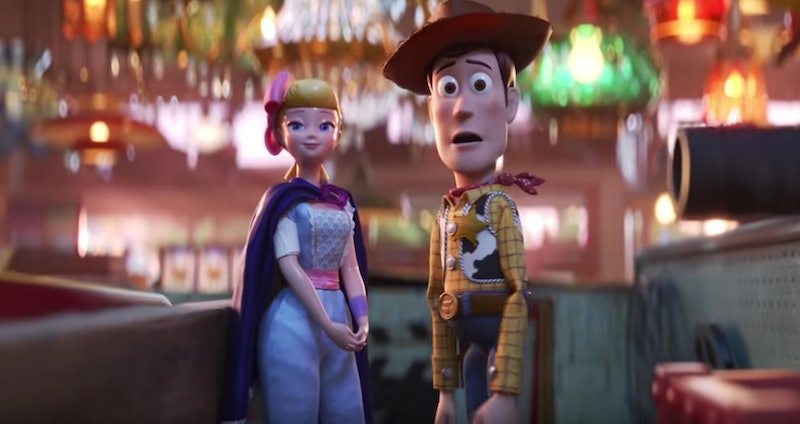 Minor spoilers ahead. Toy Story 4 places Woody (Tom Hanks) in a yet another situation that challenges his devotion to his kid owner. In the first three movies, Woody proved himself faithful to his original kid, Andy, to the end of their playtime. Now that Woody belongs to Bonnie (Madeleine McGraw) — or she to him, if you see it from the toys' perspectives — he has to face his demotion from being head toy. Through a series of misadventures, he ends up getting lost at a carnival and an antique shop, where he meets several "lost" toys who prompt Woody to reconsider his purpose. These rich settings offer ample opportunity for Toy Story 4 to sneak in Pixar Easter eggs, and boy did they pack the hidden surprises into the movie.

During a visit to Pixar's studios in April, Bustle learned that there are references to every single Pixar movie in the antiques mall, including a record of "Remember Me" from Coco and a small Eiffel Tower figurine to represent Ratatouille. Representatives of the sets team told visiting press that there are 10,000 items for sale in the shop, some recycled from previous films, but others created especially for Toy Story 4. But you shouldn't stop searching Easter eggs there, because the carnival is also home to many sneaky nods that also reference Pixar's past.

One carnival game in particular has a prominent role in Toy Story 4, and that's the one where Buzz Lightyear (Tim Allen) meets Bunny (Jordan Peele) and Ducky (Keegan-Michael Key). The first Easter egg you see at the carnival appears in a quick introduction of the scruffy blonde-haired guy who works there. In a fleeting shot, you see a tattoo of a yellow car on his ankle, and yes, that is the Pizza Planet delivery truck from the first Toy Story.

A few other prizes at the site of Bunny and Ducky's captivity are also Pixar callbacks. That includes miniature ukuleles that resemble the Coco guitar and a large stuffed banana wearing the purple wizard hat from the Pixar short Presto.

Additionally, the side of the carnival game features a painting of a robot that looks like Wall-E (thought it might not be that character specifically), and the carnival game itself involves fish that could definitely be referencing Finding Nemo. It's almost impossible to spot all of the Easter eggs in the carnival scenes in Toy Story 4, and it's even more difficult to find them in the antique store — one viewing definitely won't cut it.

In a media press conference in Orlando, per Cinema Blend, director Josh Cooley said, "If you pause any frame in the story you'll see something in the background." An interview with Collider, with both Cooley and Toy Story 4 producer Mark Nielsen explains how this was possible. "We've got this digital back lot of everything ever created at Pixar that you can bring up, and so our art and sets team really dug deep to look into everything that's ever been in a film," Nielsen said.

Also among those Easter eggs in the antiques mall is the Monster's Inc. Scream cam, the house from Up, and some vintage Star Wars toys (not Pixar, but Disney-owned now!), which can be found in the pinball machine. Good luck spotting all of those, though. It sounds like you might have to see Toy Story 4 a few dozen times in order to catch every Pixar Easter egg.